My power came back on yesterday afternoon after 48 hours of darkness, and today NJ Transit trains are back up and running. So, it's back to business as usual.

Luckily, I had finished sewing my nephew's Halloween costume before the lights went out. He had asked me to make him a Goku costume. Unbeknownst to me, when Goku gears up for a fight his hair turns blond and he becomes Goku Super Saiyan.

Here is my version of the costume. Basically, I used KS2276 to make the bottoms and top. I skipped the sleeves and I made a V neck instead of a crew neck. The blue shirt is store bought. 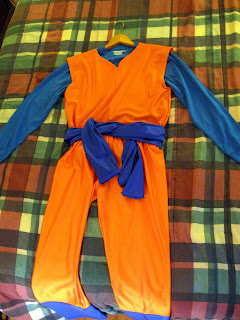 And here is my nephew, Orpheus, as Goku Super Saiyan. (Sorry this is a poor quality cell phone photo. It's what I was sent. Sigh.)
Anyway, last night Orpheus called to tell me that he "ruled" his third grade class. His mom explained that apparently some kids got in trouble because they were too busy swarming around him asking about his costume to listen to the teacher and get in line. So, I guess that means it was a success. And, as an aunt, it's part of my job to aid and abet my nephew in being too cool for school. LOL

Honestly, this was such an easy project, mostly done on my serger, and my nephew was so very happy with it that I think I'm going to have a difficult time saying no to Halloween costume requests in the future. But for now, it's back to sewing for me!
Posted by Clio at 3:16 PM

wow! A total success! I've never even heard of this super hero, but it sounds like 8 yr old boys are pretty clued up:-)

Me either! And I had no idea if it was what my nephew had in mind or if it was "right". But apparently all the kids in his class knew who he was supposed to be. So, I'll call it a win.

Awesome and the pic clearly shows his costume totally ROCK.