Not in the Mood 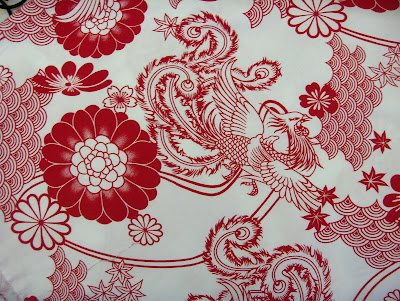 Back from Mood and all I have to show for it is this fabric, which is beautiful, but not particularly suited for ANY of my projects. Sigh

I am in a rut. I've been too busy for most of my hobbies. Since getting my sewing labels, I haven't used a single one! I was looking to my upcoming sewing class to get me back in the swing, but now it looks like I have a work conflict the night of the first class and may have to postpone.

S0, to help get me back on track, here is the (growing) list of projects that I have promised people for their birthdays and otherwise.
Actually, now that I look at it, I am feeling even more anxious. This is a lot! I think the bottom line is I need to take a few days off from work to get my crafting back on track. Would that be so wrong? I hope not. OK, off to Mood to find fabric for some of these projects.
Posted by Clio at 12:58 PM 2 comments: 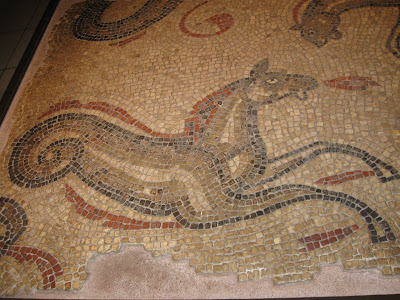 Sea-Horse Mosaic in the Roman baths in Bath, England
My fellow former Latin Scholars, it is time to put on your thinking caps or togas and make Mrs. Young proud. I saw this mosaic in the Roman baths last weekend. Was it or was it not pictured in or on the cover of Jenny, our beloved Latin textbook? I am certain I have seen it before.

*Polyhymnia, who easily outclasses us all with her knowledge of Latin and all things Roman, tells me that strictly speaking "Latine" is actually medieval Latin, since the Romans didn't actually call their own language Latin. Take that, Jenny! 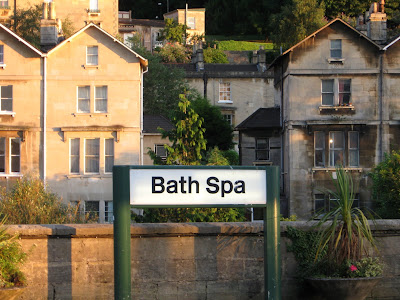 I'm usually pretty disciplined about making myself get out and see London on my free evenings during business trips. But I had a rare opportunity on Saturday - a whole free day! So rather than revisiting some of the sights I have already seen, I decided to go on a day trip to Bath.

Bath is a 90 minute train ride from London. In the morning, I headed to Borough Market in London to pick up some necessities for the journey... coffee, a steak and ale pie to eat on the way and a copy of Sense and Sensibility, by one of Bath's most celebrated residents, Jane Austen. I also made a quick stop at Saint Paul's since it was on the way, and by 11am I was on the train to Bath. 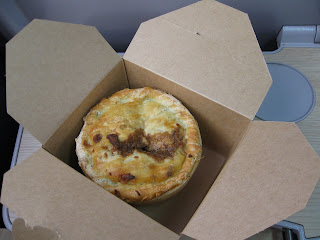 Mmmm, a personal size steak and ale pie...
I arrived fueled up and ready to hit the ground running. First stop was the beautiful Bath Abbey followed by the Roman Baths. The Roman Baths are the most complete excavation of their kind. Not only is the main pool fully excavated, but the temple and sacred thermal spring which feeds the baths, the antechambers, plunge pools surrounding the main pool, and the drains and plumbing are also excavated and actually functional. 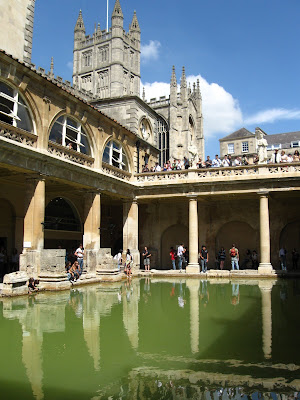 Roman Baths with Bath Abbey in the background

Next, I took a walk around the shopping area downtown, relaxed in the parade grounds and then joined a late afternoon walking tour which visited the more Georgian highlights of the town. 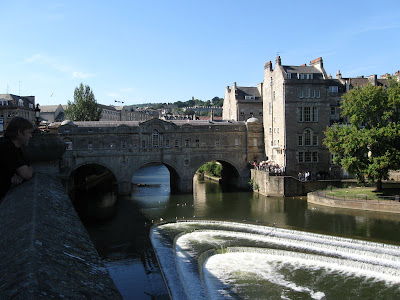 Pulteney Bridge over the River Avon 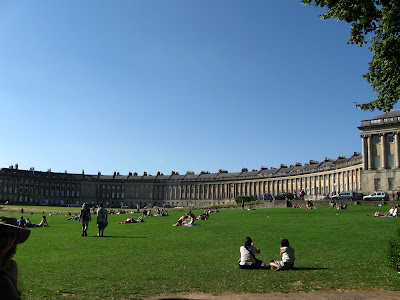 The Royal Crescent, a very posh place to live in Austen's time and now 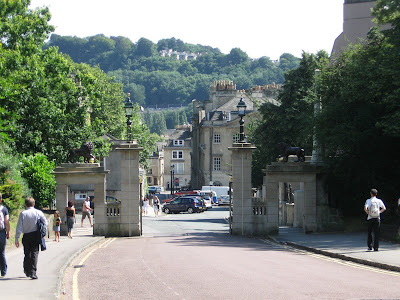 Evening in Bath was really the best. I stayed until after the tourists mostly left, writing my postcards while enjoying a glass of wine and dinner. I left on an 8.45 train when night life seemed to be warming up. One day in Bath was just not enough. There was so much to do and see that next time I will have to stay overnight and include time at the new spa which, like the roman one, is fed by the thermal springs.
Posted by Clio at 10:47 AM 3 comments:

Today was an absolutely gorgeous day in London; the kind of day where Londoners were walking around saying "finally! Summer has arrived! Huzzah!" Ok, ok, I admit that no one actually said "huzzah!", but it seemed too British not to embellish.

Trafalgar Square at 7pm
I ended my work day with afternoon tea with a colleague. And then in the evening I took myself to the National Gallery, which has a spectacular collection. When I left the Museum around 7.30, Trafalgar Square was swamped with people catching the late rays. It was like that first really gorgeous day in the late spring when absolutely everyone finds a way to enjoy the outdoors. Eighty degrees, a cool breeze and not a cloud in the sky. Perfect.
Posted by Clio at 6:36 PM 1 comment:

I am swamped. I'm not sure I've ever had a summer this busy. And yet, despite being busy, I feel like I don't have a life. How is that possible?

On Saturday, the "Bridal Committee" of Muses, our mom and KK threw a shower for Terpischore. It was a ton of fun and I'll post some pictures soon, as well as the related cooking projects which ate up most of last week. Because the shower was a surprise, I couldn't blog about any of it at the time.

But for now, I am packing my bags for London for a business trip. I leave tomorrow morning and have a packed schedule. However, I do get one free day this time since it was cheaper to stay until Sunday than fly home on Saturday. So, I am going to take myself to Bath for the day.
Posted by Clio at 1:00 PM No comments: 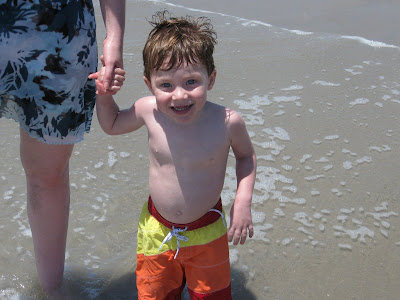 Linus, holding mom Calliope's hand
No reason for this post other than excessive cuteness on the part of Linus. And the fact that I can't stop thinking about our beach outing since I am in pain from sunburning the tops of my feet. Yes, the tops.
Posted by Clio at 11:23 PM No comments:

Some Like it Hot: An Ode to the Jalapeno

Summer makes me crave spicy food. However, I don't like my food too hot or merely hot for hot's sake. Its gotta have a nice balance of flavors and an acceptable amount of heat. This zippy dip is one of my favorite recipes for the balance between hot and cool. It originally came from Cooks Illustrated magazine and is one of my most requested recipes. It has really good flavor; the chipotles in adobo (aka: smoked jalapeno peppers) add heat, the sour cream cools the dip down and the lime adds tang. Perfect with crudites.

Add all ingredients except the scallions into a food processor and pulse until smooth and combined. Empty into a bowl. Stir in scallions. Cover and let sit in the fridge for at least 3 hours so the flavors meld. Serve with veggies, chips, etc.
Posted by Clio at 11:40 AM No comments:

Not in the Kitchen with Phineas

You probably think that the hiatus from my kitchen exploits is on account of the hot weather we've been having. But it isn't. A few weeks ago Phineas informed me that the oven was broken. (Broken? How on earth do you break and oven!?!?)

My very own labels arrived! 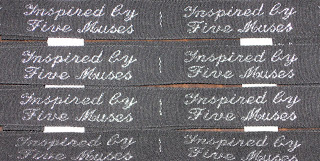 Why I began sewing...

Because pants don't fit. Ever.

I've been doing better now that a few mainstream retailers offer a "curvy" fit which has a smaller waist and larger hips than the standard cuts. But still, last week I returned a pair of pants which were simultaneously too big and too small (waist and hips, respectively). They were also too long in the crotch and too short in the inseam. I don't think I am mutant-shaped, but pants really just never fit. Ever.

So yesterday, I impulsively registered for the following new class at my local sewing shop:

Basic Pattern Drafting - Pants
4 session class.
In this new class you will learn how to draft your own basic pants pattern. Using square and curved rulers along with your measurements you will draft a pattern on paper then construct in muslin to fit and adjust if necessary. You can then use this pattern to design other styles of your choice. Prerequisites: Absolute Beginners, Sewing 101 or other intermediate pattern class. Must know how to use classroom machine. Supply list will be given upon registration. Intermediate Level.

I'm not sure I am intermediate level (I think of myself as novice). And I think I ought to do some serious homework on waistbands, zippers and button holes before the class begins next month. But what the heck. This is the class I have been waiting for!
Posted by Clio at 4:00 PM 2 comments: 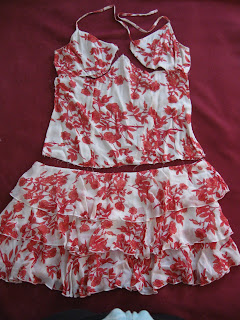 A few weeks ago, as the youngest muse, Erato, was packing to move to a new apartment, she gave me some clothing that no longer fit (she has gotten quite svelt), but that were favorites and she couldn't bear to get rid of. However, this dress just didn't work out for me either.

BUT I have a secret plan. So, I ripped out most of the seams. Erato would be horrified at this point, but I am willing to bet that her school and work schedules keep her too busy to read my blog. And in the end, she is going to have a fabulous new..... mystery gift. (You didn't really think I would tell you what it is going to be, Erato, did you? heh heh heh).
Posted by Clio at 10:29 AM No comments:

Labels: Domestic Goddess in Training, Hangin in the Craft Lounge 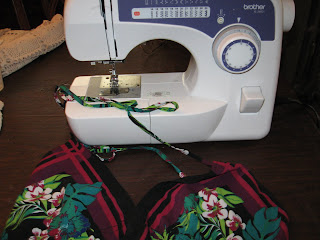 I think that everyone who sews must sooner or later get a call from a desperate friend or family member who needs a quick alteration. This was my other sewing challenge for the weekend.

The Mission: alter a sundress Polyhymnia will wear to a tropical destination wedding

Deadline: Yesterday - she is on a plane to Punta Cana right now!

The Challenges: (In her own words.)

"1) I will probably need a dart put in the cups towards the side of the cup near to my underarm. There is extra material there.

"2) If we could sew the V in the front closed just about one inch more, it will help hide my cleavage better and my bra, too.

"3) The empire waist is created from a piece of stretchy elastic that runs through it, but the extra material is all in the back, causing the back to hang down too far. It's so loose, I don't even need to use the zipper - I can just pull it over my head. Here's the problem - if you try to pull the back tighter to take measurements, the elastic around the front springs into action.
"THANKS FOR TAKING THIS ON!!"

When I surveyed the scene, she was exactly on target - the underarms gaped, the back was too loose and the neckline was too plunging for my sister. But 4 darts and some hand stitching later, the dress fit. This all sounds very anti climactic, but it was actually very exciting that I made something fit, and without any kind of instructions. It was a small victory for a new sewist!

Have fun in Costa Rica, Poly!! 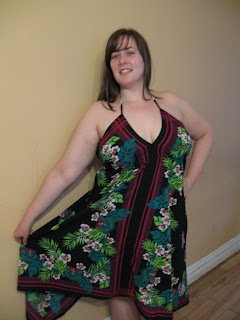