Q: Is there anything better than a favorite pair of pajamas? 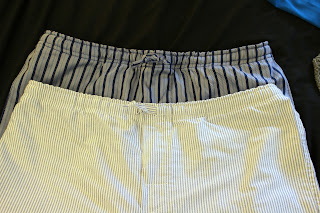 Years ago, when Phin and I were first dating and before I sewed, I bought him pajamas for Christmas. They were really great pajamas and lasted through years of near constant wear, broken in to a buttery softness. Until one day...

By that time I was hooked on sewing. So, I carefully unsewed them and used the pieces to create a pattern.  I bought nearly identical fabric at Rosen & Chaddick on the very first PR meet up that I attended.  And soon after, I sewed Phin new pj's - an almost exact clone of the originals.

At the time it was a challenge - I had to learn to sew a flat felled seam and reverse engineer the fly opening. But they came out great, and I was even able to use the original draw cord from the waist, preserving a tiny bit of the beloved originals.

That was six years ago, and the clone pajamas - which have been loved and worn as much as the originals - are nearing the end of their lifespan. So, off I went again to Rosen & Chaddick with a sample of the clone fabric in hand.  And, wouldn't you know it, they still carry the lovely blue and white striped oxford that so perfectly matched the original pj's.

So, here they are, Phin's Pajamas III!  (Which I did not press for this photo shoot since, well, pajamas.) 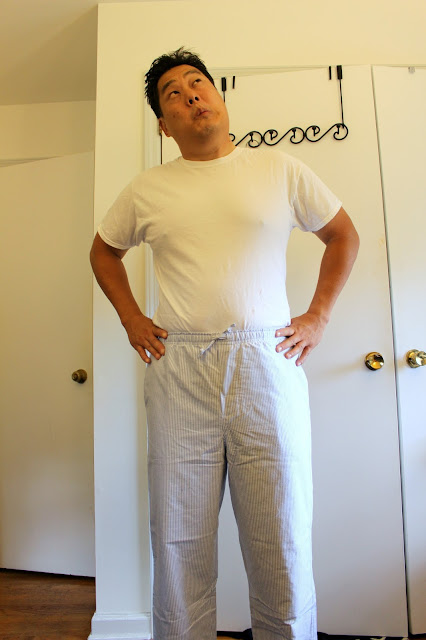 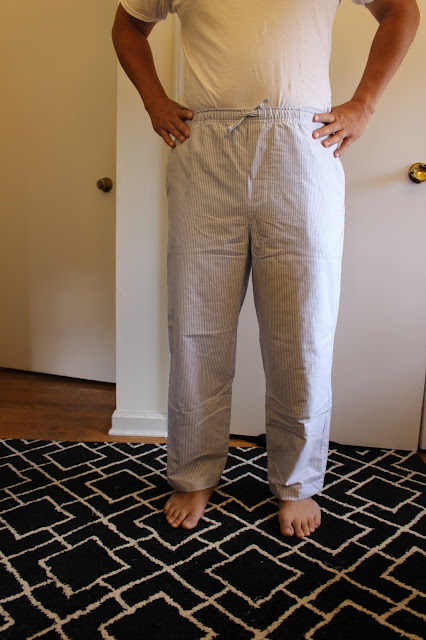 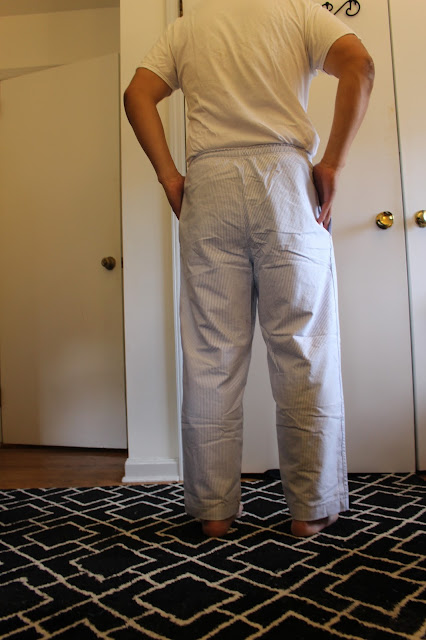 And, as a bonus, I sewed him an additional pair in this lush shirting, also from R&C, which I bought for his birthday and had meant to sew up when we were expecting Taco. There was a little additional fabric left on the bolt, which they gave to me for free. So, there is enough leftover for something for myself. 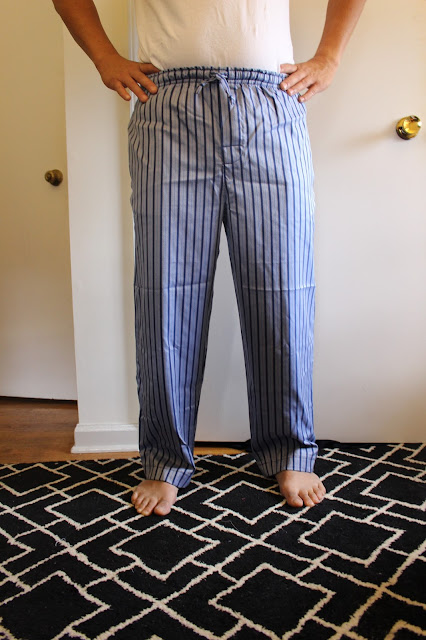 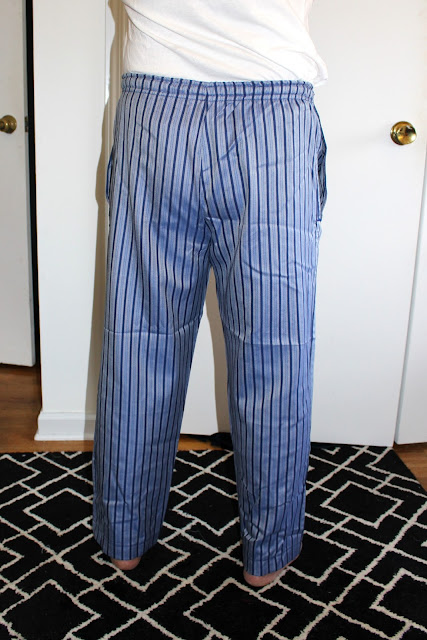 There isn't usually much to say about a repeat sew, but this time I am clapping myself on the back for figuring out a better way to sew an inseam pocket in a flat felled seam. I've always sort of fudged and patched up the pocket. It has never been pretty. But just look at this pocket, complete with seam reinforcing bar tacks! 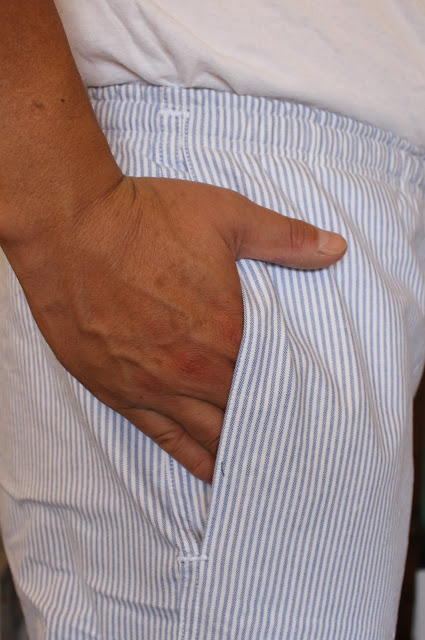 I feel like it came out pretty darned flawless. Sewing a flat felled inseam pocket must not be done often since there is not a single tutorial to be found and no references to it in my sewing library. Luckily, I found an old forum on the Threads website, which referred to an older forum post on the Pattern Review website. Here's what the Threads poster - Chubello - had to say:

Thanks to an old post by Gigi Louis at Pattern Review I came up with this method:

Lay the front pocket piece into position on the garment front, right sides together.

Starting at the beginning of the opening, stitch in from the side an amount equal to the seam allowance (5/8 of an inch), then stitch down to the end of the opening and back out to the side. Sort of an open rectangle.

Trim and clip to the corners. Turn inside, press and top stitch.

Lay the other pocket piece over the front pocket piece, right sides together. Stitch all around the pocket pieces. Finish raw edges. You now have a completed pocket on the front.

To proceed with the side seam, place the front and back pieces together, wrong sides together. Stitch seam being careful not to catch pocket edge. Proceed to press, trim and “flat fell” seam.


It was fairly methodical sewing once I carefully worked out what this all meant. I'm posting it here since I am certain that these are not my last pj's for Phin and I'm not likely to be able to find the thread again. I was not able to find the PR forum post referred to in it.

Anyway, I will leave you with a few more pictures of Phin in his cosy new pj's. 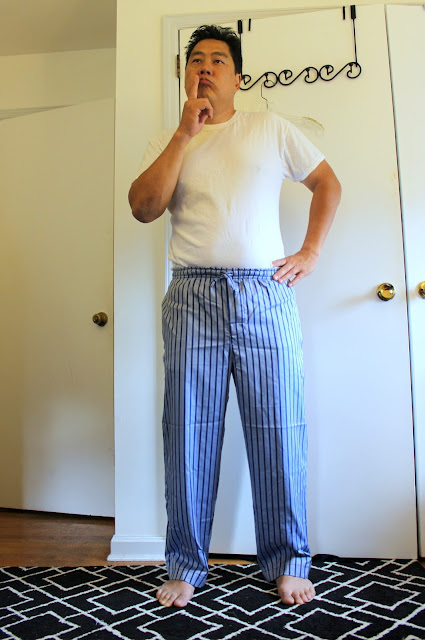 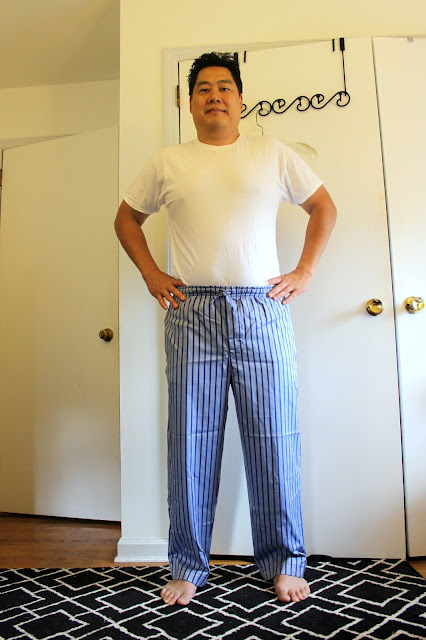