So Phin and I have managed to keep a new little human being alive - and thriving - for six whole months! This seems a cause for celebration.  Also, with just two weeks of maternity leave left, it seems like a good moment too pause, reflect and catch up.

I haven't been blogging often, but if you follow me on Instagram, you know I have a number of sewing projects in the works and have been baking regularly. Here are my WIP's, if you are not an IG fan. 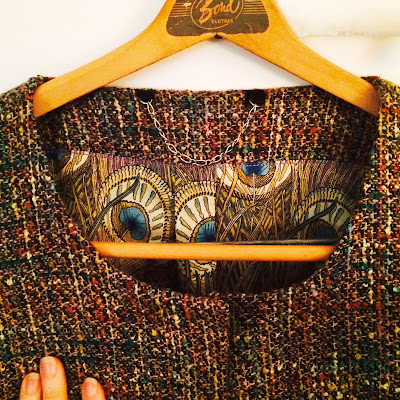 To help transition back to a career mentality, I'm sewing a new jacket. It's a little french jacket, but done in the quick method, which is about as much of a time commitment as I can handle right now. It's all done except for a little bit of hand sewing.

I'm sewing a ring sling for my brother-in-law. He and my sister are expecting -  we are so excited that Taco will have a cousin near to his age come August. 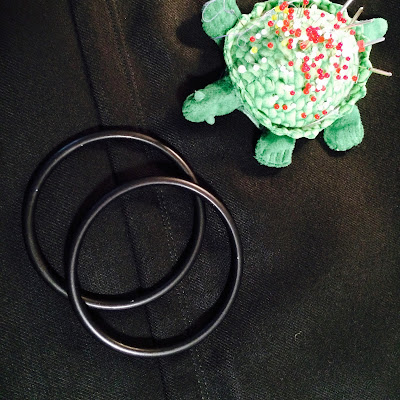 I'm sewing a crazy rainbow colored blouse. I've been wanting to sew this pattern (M6991) for nursing for some time. The front is all one piece - both the right and wrong sides show. It took some time to find an appropriate fabric. 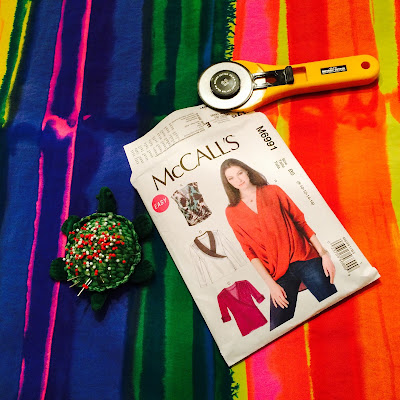 And I just started working on a diaper bag for my sister. It will be the same style as my own. 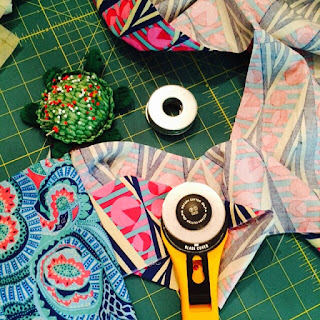 And now for Taco! I've enjoyed the last many weeks with him. He is in this wonderful little phase where he's able to sit independently, but is not quite ready to crawl. At six months, his personality is starting to really shine through - happy, chuckley, curious and determined.

We have lots of afternoons where we put out a blanket and toys on the back porch, and sit out to enjoy the weather.


When the afternoons are hot, Taco plays in his splash pad. Water is incredibly fascinating. 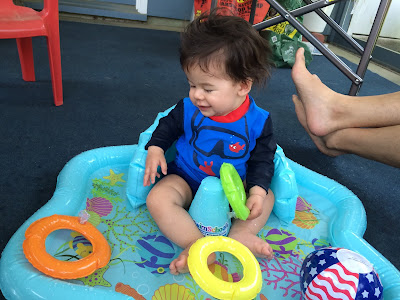 But his favorite activity, it seems, is bouncing in his jumperoo. 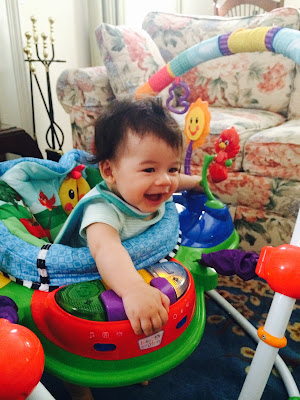 Taco gets so wild, jumping up and down and laughing like a little maniac, that his bib migrates to his back like a cape.  In fact, even if he's not in his jumperoo, he'll still bounce if he has someone willing to help him stand.

As active as he is, there are also some very sweet moments when Taco just wants to snuggle with me or Phin. Lately, he will reach out his arms for us to pick him up.


Oh, yeah, and everything goes in his mouth since he began teething.

Now that he's six months old, I feel like we're about to enter a new phase. I'm so happy that both Phin and I were able to take a step back from our careers and give Taco the very best start that we could. I've reached my own personal goal for breastfeeding, and Taco is growing bigger and stronger every day. He's managed to pull himself up to standing, which means he's officially outgrown his bassinet and is transitioning to a crib. We've been letting Taco play with his spoons and plates while we eat dinner. He has two little teeth now and is interested in watching us eat; he is ready for the adventure of trying food!


It will be a big change, going back to work and becoming a working/pumping mom. I'm feeling fortunate that Phin and I are both able to cut back our hours so that, with the help of family, we won't need additional childcare. I suppose this is one of the benefits of becoming parents a bit later in life: flexibility and options.

Anyway, I may not blog much in the last two weeks of my leave; I have a lot to do to get ready for work and want every remaining second at home with Taco and Phin. Ironically, I'm looking forward to my commute. It's always been the time when I knit, read books and catch up on blogs. And now I hope it will be when I find time to write my own blog.

Stay tuned for the next chapter!
Posted by Clio at 1:10 PM No comments: