I've been in hibernation for a few weeks. Politics. But I haven't been idle. So, it's time to get back to the blog, and a sweater for Taco seems like a happy place to start.

Knitting sweaters takes forever, unless they are for teeny tiny people. Like my Taco. 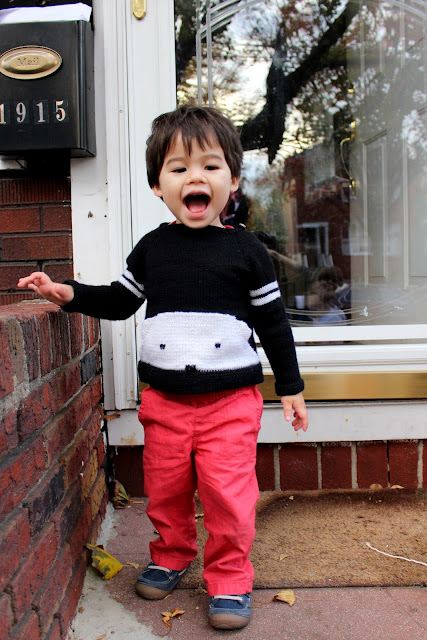 I first attempted this sweater back in January and got pretty far. However, I realized that it was coming out WAY too small for my little guy.

So, I frogged it.

But I'm glad I decided to give it another go with larger needles and in a larger size. Isn't it cute? 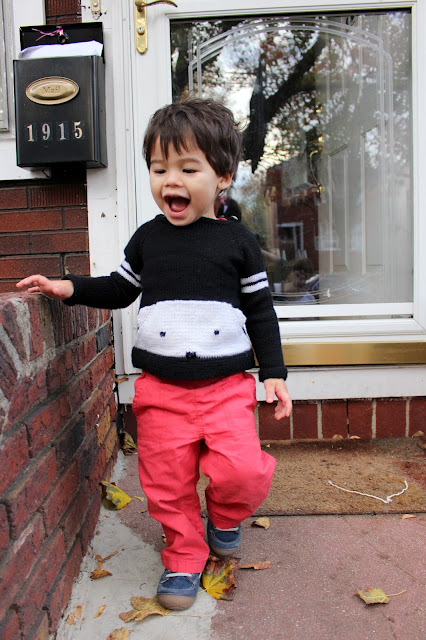 This is the Teddy Sweater by Terri Kruse.

I think it is thoroughly adorable even though I'm still not 100% happy with the fit.  The problem is in part my yarn and part the pattern. The pattern page on Ravelry calls for sport weight yarn, but the suggested yarn is Malabrigo Arroyo, which is a DK weight yarn. I knit the sweater up in Cascade 220 Superwash Sport, left over from this frogged baby blanket. 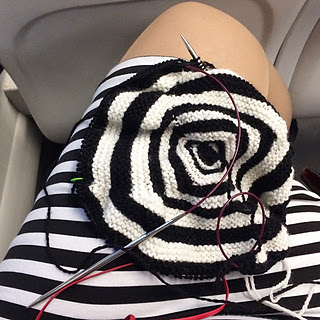 I had used the yarn for these Duck Booties, which also came out small and were consequently gifted to Taco's cousin. So, this yarn may even be thin for sport weight. 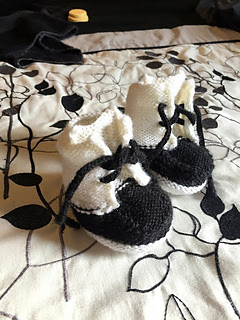 That said, I did get a pretty good fit in the end. When I blocked it the first time, I was worried about the width. In actuality, I should have been worried about the length. It is just long enough as is, but is too wide.  So with some re-blocking, I think it will be perfect. 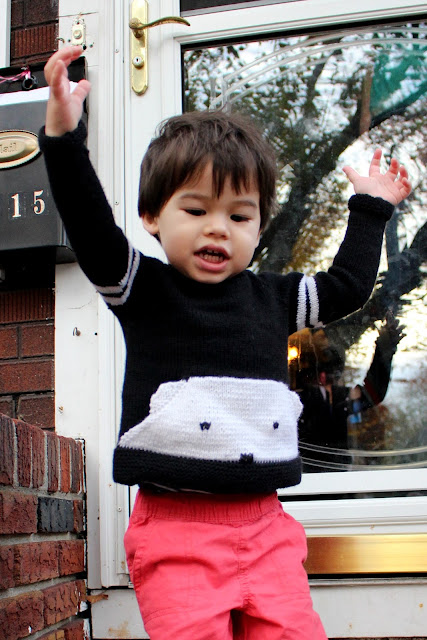 For a sweater, knitting was actually a cinch.  This sweater is knit all in one piece from the top down. Hooray for no seaming! I know it is a great way to get a good fit, but what it means for me is that the sweater will sit - blocked and unseamed - for weeks. 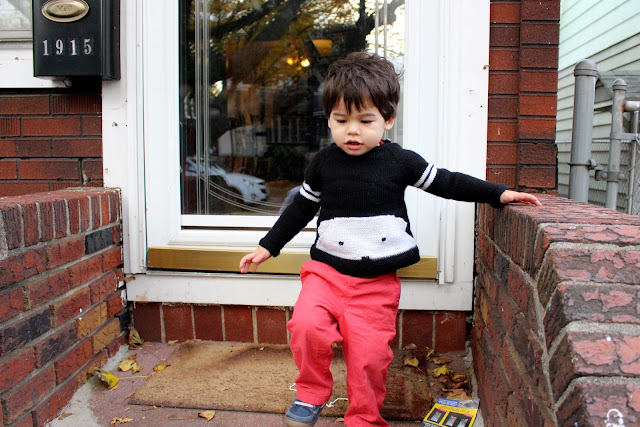 The one thing I did different is the pocket construction. The instructions have you put stitches on hold and cast on new stitches, and then later go back and close up the hole you created. Instead, when I got to where you are supposed to start the pocket, I simply purled the stitches you are supposed to put on hold/cast on to start the pocket. I continued knitting the sweater until the length the pocket was supposed to be. Then I picked up the purled stitches using the white yarn and knit the pocket. This left me with nothing to sew up at the end. I have no idea why you would do it the other way unless you really hate picking up stitches. 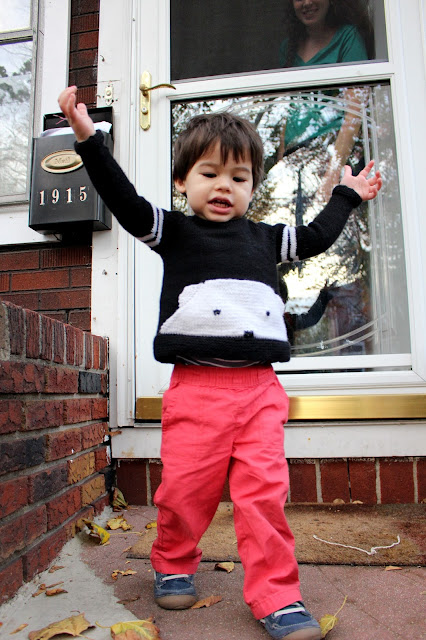 The only other detail is that I used a button from the tin of buttons I inherited from my grandmother. I thought that was the perfect finishing touch.

Anyway, I think once this is reblocked, it will be perfect, and Taco seems to like it. He has picked it over his other jackets and sweaters more than once. He's recently shown a preference for clothing that has an animal or other character on it.

So, it is on to the next sweater for Taco while he is still small enough to make it feel worthwhile!
Posted by Clio at 12:08 PM No comments:

I try to learn from my failures...

... Like last Halloween when Taco was so very unhappy in his hippo costume and cried for all of the 5 minutes he wore it. So, this year we went with a more clothing-like approach to Halloween. 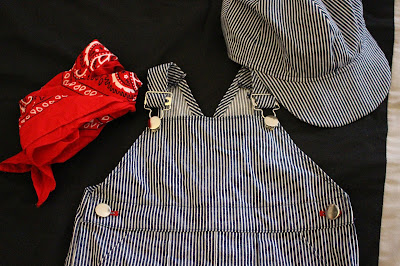 Taco loves trains. And I love Taco in overalls. So, we decided that he would be an engineer. It was Phin's idea. (Yay Phin!)

I already had striped denim in my stash. I had purchased it in the spring before I sewed his first pair of overalls. 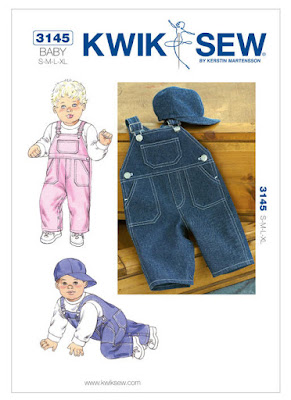 I used the same pattern, KwikSew 3145, but in the next size and lengthened. The pattern envelope also has a baseball hat pattern included. So, that became the hat for the costume.  A white shirt and red bandanna finished the look. As I anticipated, Taco wanted nothing to do with the bandanna and hat. But he did look winning in his overalls.


I simplified the construction just a bit. As drafted, these overalls have 6 pockets, which amounts to a lot of top stitching.  I eliminated the bib pocket on the front and the painters pocket on the back. I also used a simple running stitch for the top stitching instead of the more time consuming back stitch that I favor for making top stitching stand out. Those two simple changes made the project much less time consuming. 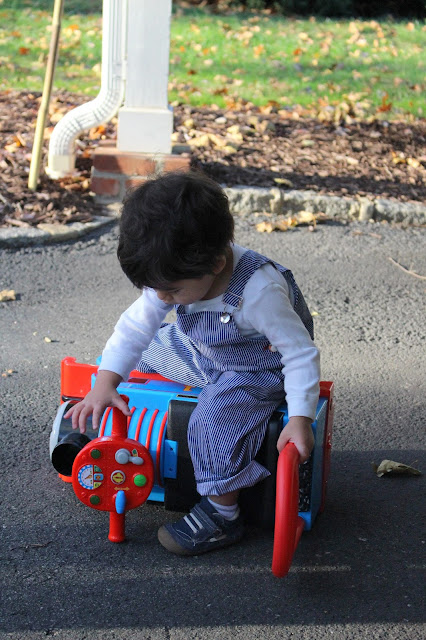 I do plan to sew 1-2 more pairs of overalls with this pattern. However, I will be taking them in a bit. These ones really are rather wide on my skinny little dude. At this point they are also long, but he will grow into them.

As for Halloween, while Trick-or-Treating was a bit beyond his grasp this year, Taco did enjoy helping us give out candy and investigating the front porches and Halloween decorations of some of our neighbors. He didn't seem to understand the getting candy part of the transaction and preferred to just say hi. He also ate his very first candy: a blueberry lollypop which left his lips and tongue blue.

We had a great time as a family. 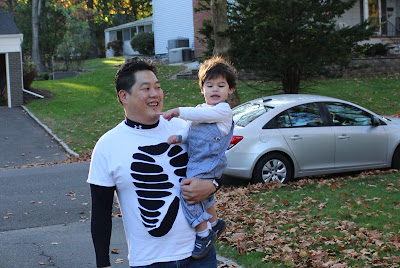 And Taco was happy to be outside on such a beautiful Autumn day. 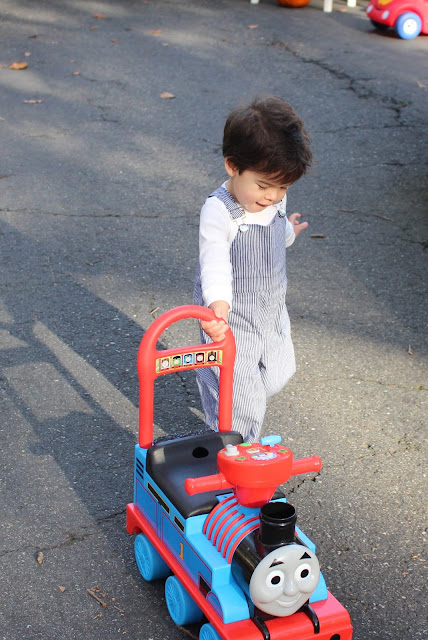