For the record: Nothing good happens in the Craft Lounge after 9pm.
On Monday night, I headed up to the Lounge to work on my Karl Lagerfeld skirt. Here's the "before" picture: 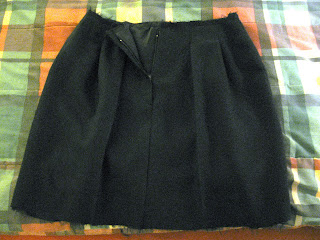 Here's the "after" picture:

Why yes! It is the same picture. Here's what happened:


I interfaced the waistband and the cuff pieces, learning in the process that my new iron leaks. I noticed this when steam started wafting up from the under side of my ironing board. Hot water was leaking all the way through and then as I pressed, it was evaporating off the bottom of the board. Bizarre, no?
After a few choice profanities directed at Black & Decker in general and my iron specifically, I briefly considered basting but then sewed the waistband onto the skirt and tried it on. Two things: first, the waistband is too big. I have no idea how I failed to notice this since I measured it moments before applying it and (in theory) was aware that it was 3 inches wider than my waist, not counting allowances. (duh.) Second, I sewed the waistband on before I basted the cute little faux pocket flaps on. So, I spent the next 20 minutes unsewing black thread from the somewhat loosely woven black wool of the skirt. Not an easy task.

Then I realized that I had no buttons. The pattern calls for 4 of them.

Then my mom called to say that the wearable muslin camo pants I had made for my nephew didn't fit him.

So, essentially, things stand exactly where they were before I began sewing on Monday, except that I am now minus one iron, ahead by a bit of interfacing, missing 4 buttons and needing to sew new pants for my nephew.

The moral of this story is: Clio should not sew after dark. No good can come of it. None.

That said, I'm really really pleased with how this skirt is coming. I decided that, because the wool I'm using is pretty loosely woven and potentially itchy, it ought to be lined. So I created and dropped in a lining. Honestly, I think this is the nicest, neatest trouser-style zipper and lining I've ever done. The insides are shockingly neat for me! 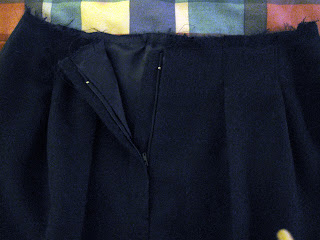 The back of the skirt is supposed to have elastic in the waistband. I'm trying to avoid this. I sewed two darts on the back to eat up the extra fabric and now just have to finess things a bit. Oh, also, I left out the hip pockets since others have commented that they were small (useless) and a bit confusing to sew. Plus I don't like any bulk at the hips.

So, in the next few days, I will be doing this all again, but this time with buttons, pocket flaps, a smaller waistband and a different iron. Wish me luck!
Posted by Clio at 4:47 PM

Labels: Hangin in the Craft Lounge, The Rock I Live Under

I do wish you luck! The skirt already looks good, short, but good! I totally sympathise with your sewing plight. I sew when I'm tired because there just isn't any other time available, and then it all goes wrong!

Aww, what a pain! I've had some nights like that recently, too.

The skirt looks great. This is such a cute pattern! I'm glad the gremlins didn't do anything irreversible to it.

You are a great sewist and I know you will get it all worked out.

Ask my husband and son about all the loud yelling and profanities they heard last night as I sewed at 10 pm. I can really only accomplish "good" sewing at night between 8 pm and 9:30 pm. Downhill and often disastrous after that. Hang in there!

At least I'm not alone (with the late night sewing AND the unbecoming language). LOL

Aww, Krikkit! Hang in there. I don't believe the whole 1-hour-ness of 1 hour patterns - I've never managed it. BUT it does all get easier and quicker with experience and practice, although even the best sewist has nights they'd like to forget. And sometimes (not this time, but sometimes) I learn more from my frustrating episodes than my successes.

Oh dear, I hope things are going better. I have a "pencils down" rule at midnight, but I think I may need to move it a little earlier! Meaning I better hustle if I want to get anything done tonight...