Last night was a rare weeknight when I didn't have a run or yoga planned, no baking projects and no social commitments or other things that needed doing. And I'd already finished my homework for tomorrow's sock knitting class. So, I decided to get back into the Craft Lounge for some sewing.

The only problem was that the only project that needed sewing is my dreaded Donna Karan skirt, clearly a potential UFO at this point. In fact, I was feeling an aversion to actually being alone in the Craft Lounge with the skirt staring me down from the corner where it is heaped in a pile in such an unfinished state.

So, I decided to jump to my next two planned projects for myself, both from BurdaStyle and neither requiring a trip into the Lounge, since I prefer to do pattern tracing on the dining room table. (Clever of me, no?  Although, I don't know what it says about me or the skirt that I would rather trace Burda patterns than look at my skirt.) 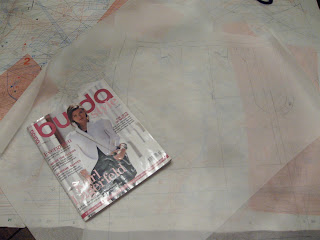 After evaluating the two patterns, I decided to start with the Karl Lagerfeld skirt (BurdaStyle 10-2010-136) rather than the dress from the cover of BurdaStyle 9-2010. This decision was based on the number of pieces I'd have to trace (3 vs. 11) and the amount of altering the patterns would need (the dress is a petite and I am a tall, according to Burda). 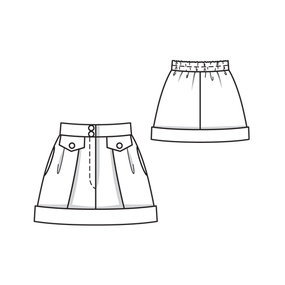 My immediate observation is that Karl Lagerfeld really takes the "mini" part of miniskirt seriously. The entire skirt piece measures only a scant 13" in length. At 5'9" (or 69"), this is not quite enough fabric to cover my bum. Forget about sitting or bending or even coming out of the fitting room with the other 56" of my body not covered by skirt. So, I added 6" to the length (so much for avoiding petite to tall modifications!). This will still be pretty short for me. 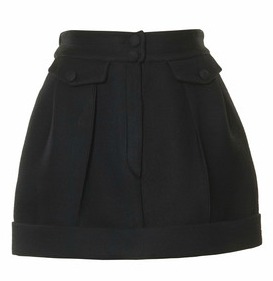 I've got two wools in my stash and I'm trying to decide which to use - light blue or black. The black would make it look exactly like the Burda version (+6"), which would be versatile and cool and I could probably get away with wearing to work with tights. But blue is a nice color on me and would add more color to the bottom half of my wardrobe. Hmmm, decisions, decisions!

And that's where things stand for now. More later!
Posted by Clio at 3:36 PM

My first thought is, Clio is escaping one difficult skirt with another! Lol!
It is a cool looking skirt, go for it:-)

I like the new skirt pattern, and I think it would look great in either color, though I am leaning towards the black. I dunno, I always feel darker colors are more practical for the lower half, though I can understand the desire to make something different. Can't wait to see how it turns out!