B is for Baby, S is for Sew Along!

If you read either Cation Designs or Polkadot Overload, then you probably know by now that Cindy, Mikhaela and I are teaming up to lead the Small Human Being Sew Along.

Our goal: to get ourselves back into the sewing swing of things in a non-stressful and fun way while our babies are, well, still actually babies. And since it seems like there is a mini baby boom in the sewing blogosphere, we decided to get a few prizes and see who might want to join us. We've even got an official badge thanks to Mikhaela!

In fact, we have a warm weather version, too!

The Fine Print
The official guidelines are here.Grab a button below, holler that you are in and you are all set!

The gist is that we're taking a pretty broad approach: sew something - just about anything big or small - for your baby or baby-to-be (0-12mos). Sew more than one thing if you want! Don't have a baby of your own? No problem! Sew for someone else's baby - your niece/nephew, godchild, grandchild, fairy godchild or for a charity like CareWear, a nationwide network that provides handmade baby items to hospitals.

We have a few categories for prizes: baby clothing, baby toys/accessories (toys, blankets, bibs, etc) and for parents (diaper bags, nursing apparel, etc). If you want to be eligible for our awesome prizes from Ottobre and Oliver & S, just be sure to enter during the official sew along dates - in April!


Since group sewing is more fun with a group (duh!), let us know you are sewing along by leaving a comment here or on Cindy's or Mikhaela's blogs (and your plans, if you know already). You can post photos of your makes on Twitter and Instagram with the hashtag #SHBsewalong, or post to our Flickr group. At the end of the month, we'll also post a call for links if you want to link to a blog post with your items.

I have two projects planned for the sew along - one for me and one for Taco - and, along with Cindy and Mikhaela, will be doing some inspiration posts along the way. I may even have a little tutorial to post if all goes well with my sewing.

Stay tuned and join in! Grab your button - in either winter or summer flavor - below!

Apparently, Monday is my day for posting! So this week, I'm sporting another non-nursing/non-maternity top that a minor tweak has made perfect for nursing. Really, why stick to "maternity" or "nursing" clothes when I can make fun things like this that I'll be happy to wear nursing or not? 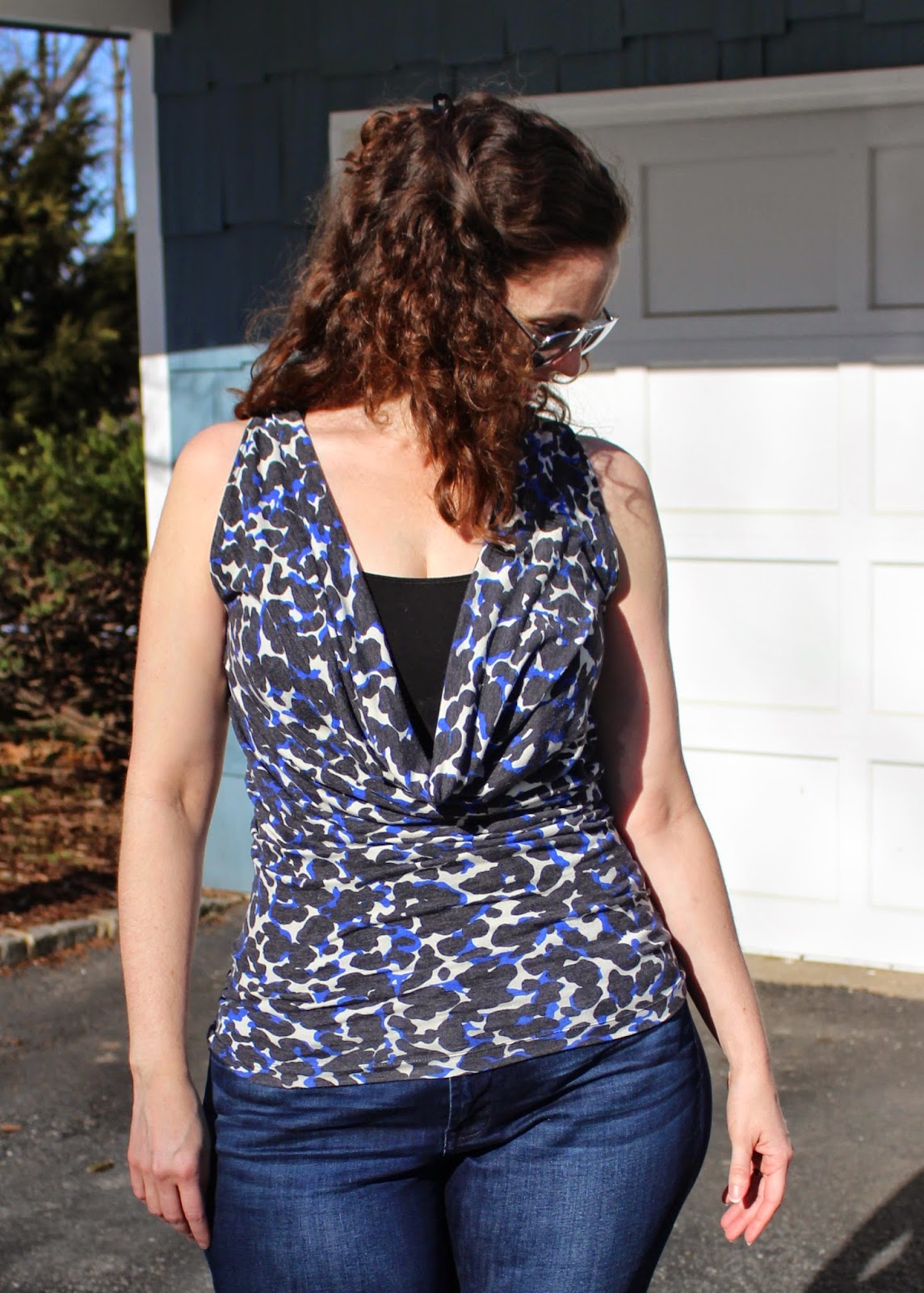 This is V1282, a Donna Karan cowl neck top. Like my last nursing make, this is a pattern "encore" for me - I first made it about 2 years ago (here and pictured below left). As much as I loved the first version, it never found a steady place in my wardrobe for some reason.  My new version, however, has already been worn twice in two weeks.


You may recognize the fabric from this maternity dress. I had about a yard leftover, which was perfect for this top. The only change I made to the pattern, aside from adding a little wiggle room at the hips, is that I didn't sew the center of the cowl up as high, which you can see compared to the original. This necessitates wearing a cami underneath for a layered look, but makes the top perfect for nursing.

This week I was thinking about how major changes to my wardrobe/style have accompanied all my major life changes - high school uniform to jeans and concert tees in college, to first job suits as a young adult, to really crafting my own style as a married career gal in my 30's, and now new mom on maternity leave. In addition to the change in my identity and lifestyle needs, the normal, healthy physical changes caused by pregnancy, birth and breastfeeding means that most of my clothing doesn't fit at the moment - physically or emotionally. And while I have some insecurities - like will my leather jacket ever fit again? - I'm trying to embrace the new and use it as a springboard to expand and experiment with my style rather than seeing limitations. 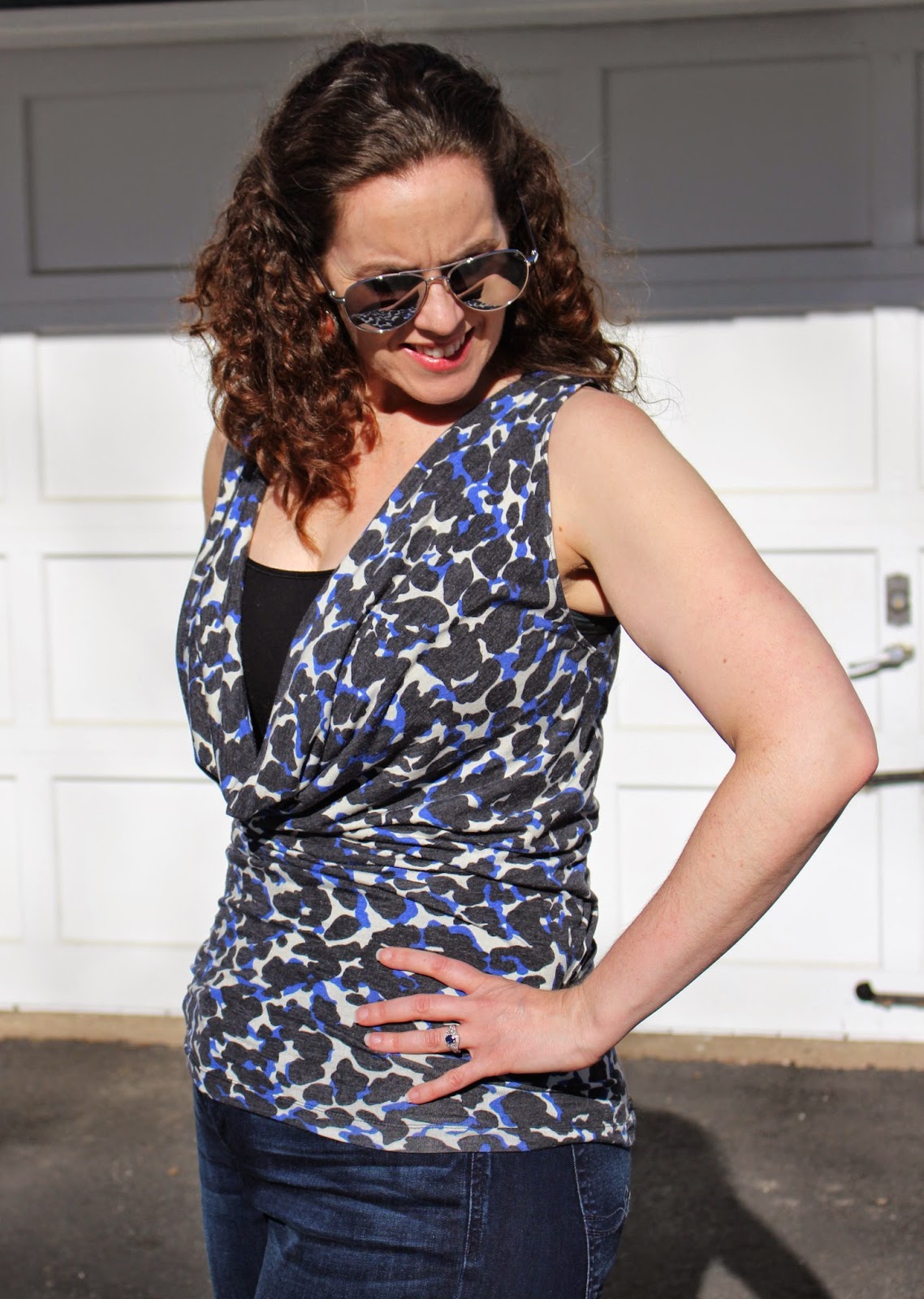 Easy knit tops have never been my thing, but I really like this top. I see it as a good segue between the old and new - very much my style, but also practical for the here and now.

What are your thoughts about changing style and life changes?
Posted by Clio at 9:00 AM 12 comments:

When I announced my pregnancy, the Trample Herd immediately decided they needed to shower the baby-to-be with gifts. 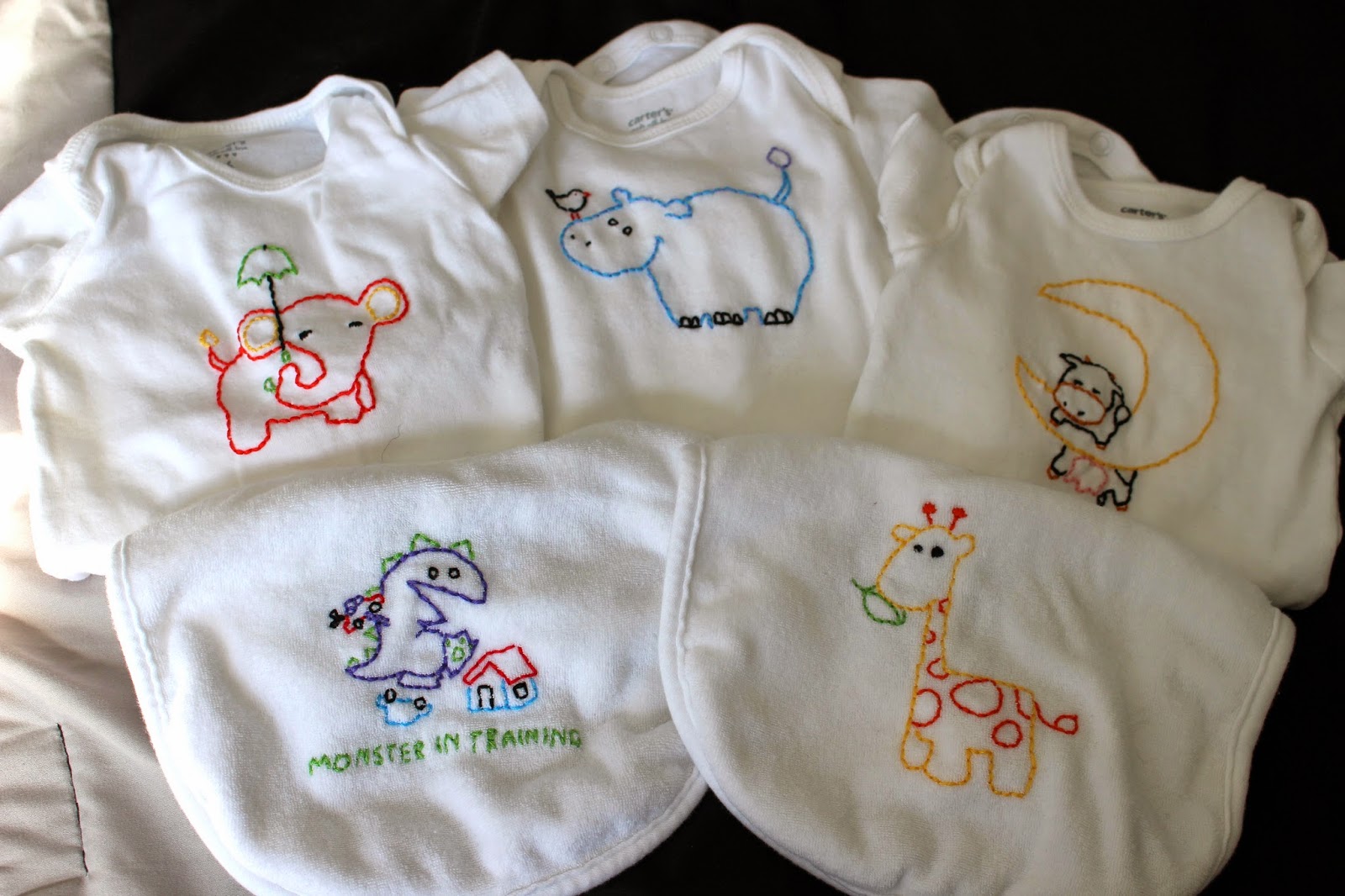 They put me to work embroidering some baby basics - onesies and bibs - with Trample Herd inspired animals.  They wanted Taco to have wearables that represented them. Naturally, it was Dragon the Hippo and his sidekick, Milkshake the Cow, that instigated the whole thing. 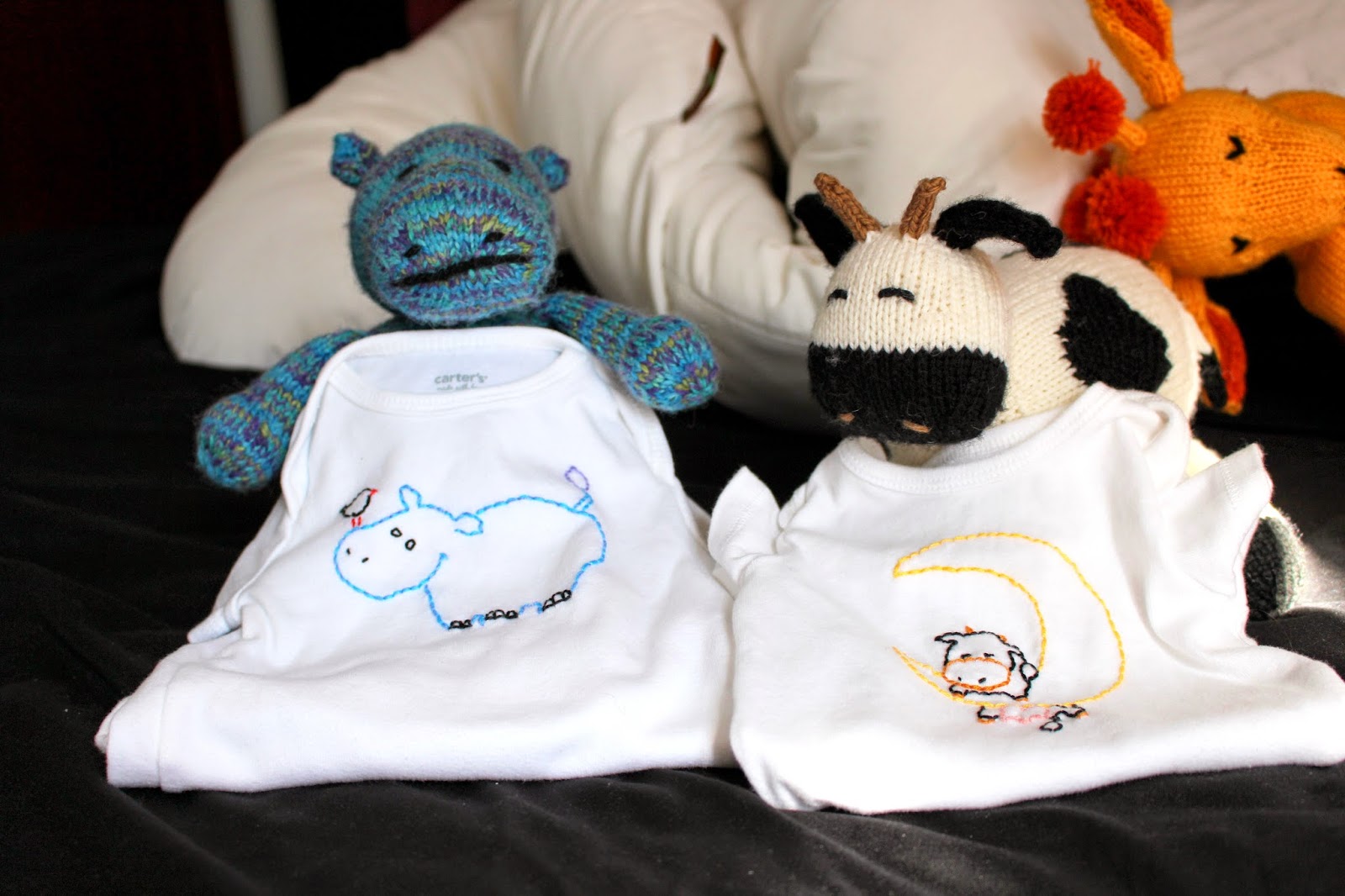 I worked on this on-and-off while pregnant and since Taco was born, and I even embroidered the giraffe while in labor. This is still an ongoing project. I need to find a bunny pattern so that Hopscotch can be represented.

All of the designs are from Urban Threads. I'm not particularly skilled in the embroidery department, but with a few simple stitches, these came out very cute. 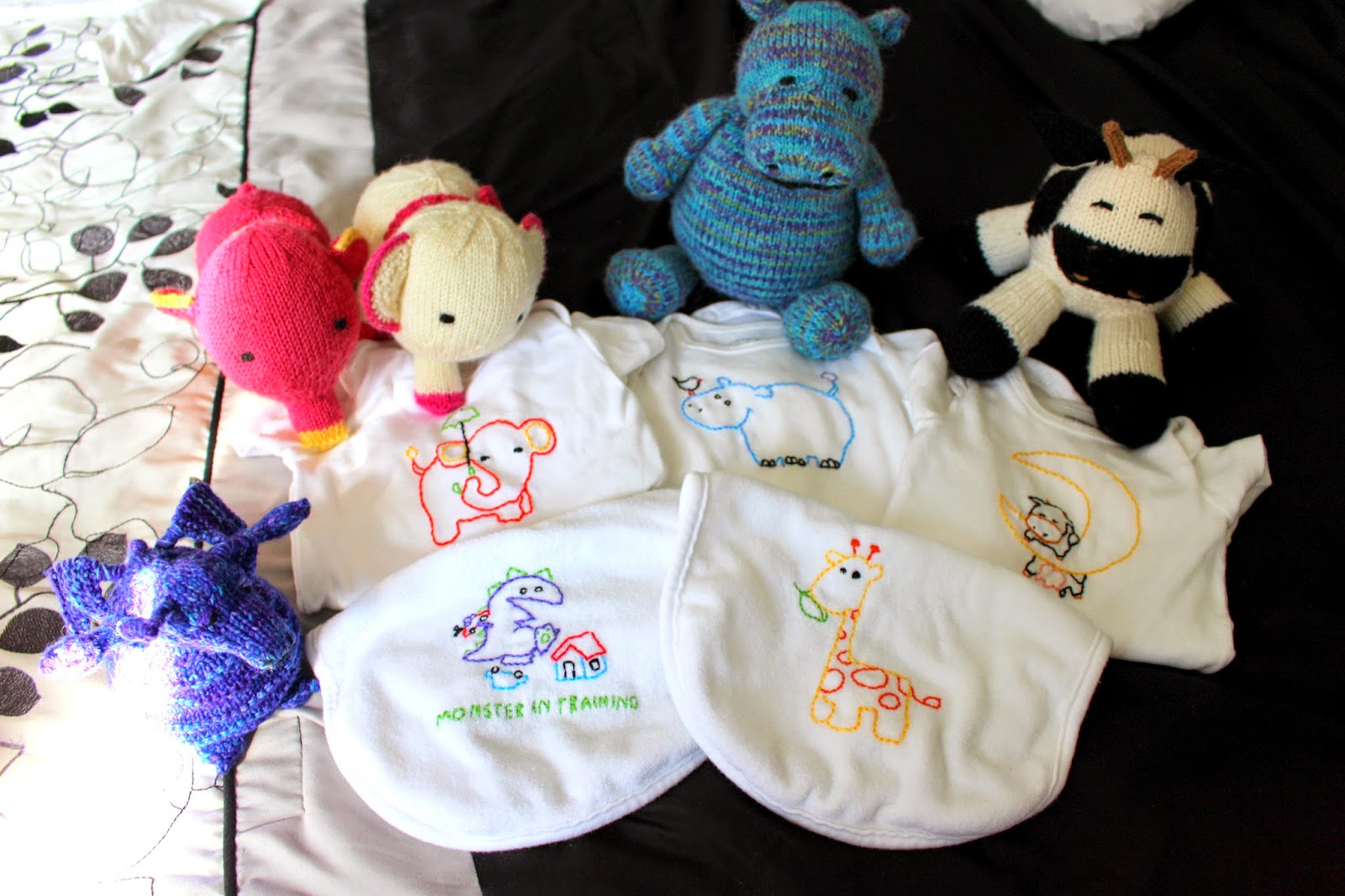 And now Taco can wear the herd right in time for his 3 month birthday, which they are very pleased about.

I can't believe it's been 3 whole months since Taco was born!  He has officially passed the 4th trimester and is now an infant instead of a newborn.  He has doubled his weight, learned to laugh and coo, and in the last week has started holding his head up and rolling from his tummy to back during tummy time. It's amazing. But what's even better is seeing the beginnings of Taco's little personality.  He seems to have Phin's laid back, calm attitude - nothing is a big deal. And he's chuckley. He seems to be a happy and social little guy.

Now, I'm not going to lie and say that he is sleeping thru the night and that parenthood is a picnic. He isn't and it isn't. But I think we are doing pretty great for a new little trio and figuring things out. And now that Taco's attention span seems to be growing, it is easier for me to begin getting back to some semblance of normality. On Wednesday I went to the gym for the first time and then on Friday Taco was happy to be in his carrier long enough for me to bake. So, I hope there is more of that to come.

Anyway, here's a shot of each embroidered item.

Next up: A knit top for me or a new hat for Taco, depending on what we can get photographed!
Posted by Clio at 1:48 PM 18 comments:

Labels: Hangin in the Craft Lounge, Snips and snails and puppy-dog's tails..., The Trample Herd

Will this Winter Ever End? Or Chili Booties

If you follow me on Instagram, you saw my solidly mediocre darning skills on display when I fixed these booties that I knit last year. Since the originals have been worn so often they got holes, I decided to knit myself a similar pair for this winter. 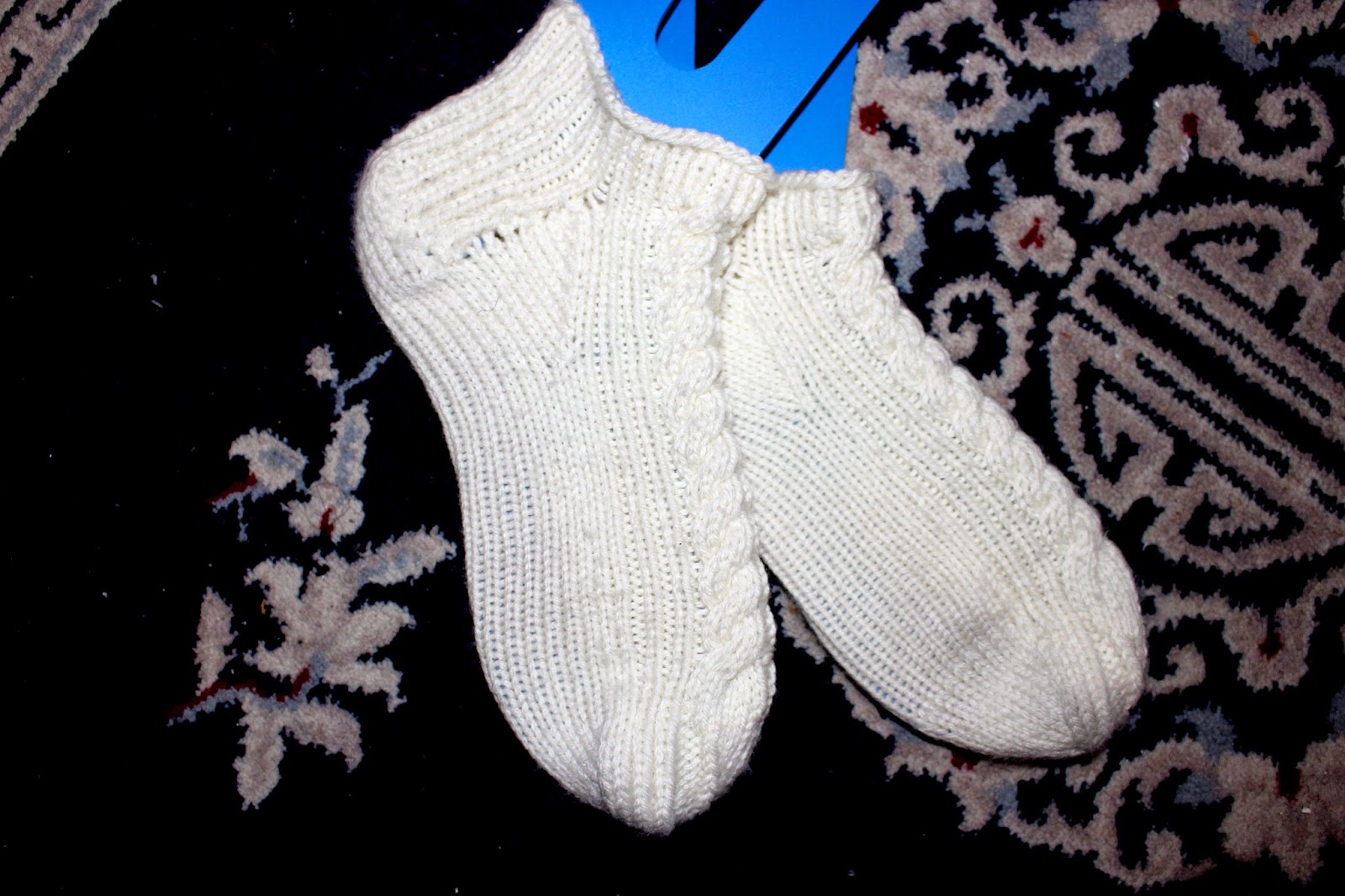 These are my new "Chili" booties, a free pattern from DROPS Design (DROPS 131-43) that you can find here. I knit them up in leftover Cascade 220 Superwash yarn from the Tree of Life Blanket I made for Taco.

Once you decipher the instructions, which are rather hazy, the pattern is very easy.  Essentially, the Chili bootie is a very simple sock, knit from the top down and with a very easy cable pattern down the center front. Since they are knit in a worsted weight yarn, they work up lickety split. 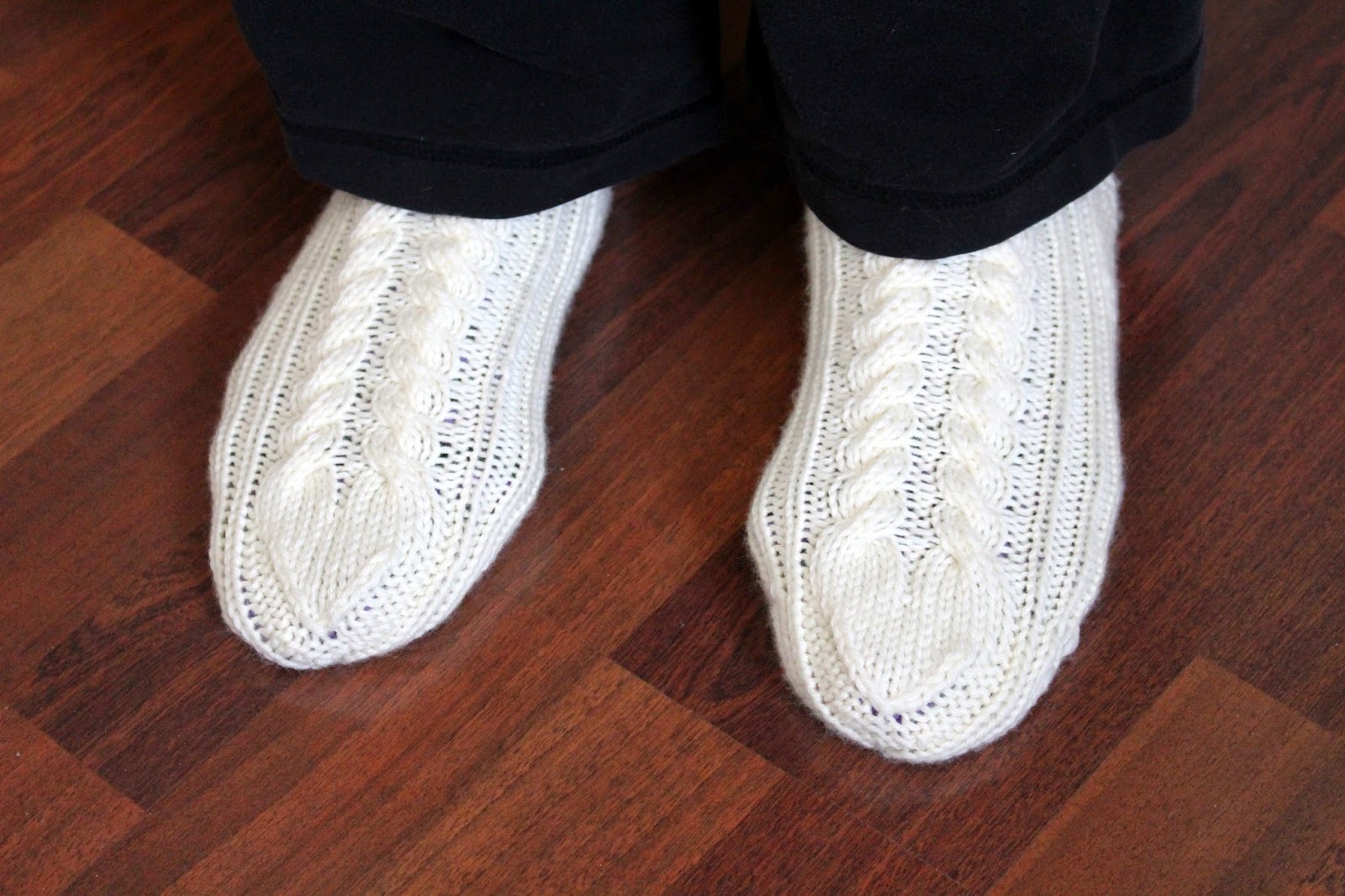 I wish I could recommend this pattern to first time sock knitters as an easy way to learn the basics.  Alas, the instructions are just not user friendly and rather confusing. I had to draw on my knowledge of sock knitting to figure them out. However, the booties themselves are very cute now that they are done. The cable pattern really is rather pretty.  I'm sure this pair will get just as much use as last year's booties.

It seems like this winter will never end. I've been reminding myself that each day is one day closer to spring. It's a bit hard to get out with such a little one, although Taco and I walk just about every day it isn't snowing or icy. This winter that means there are a lot of quiet days around the house. At least I have some new booties to keep my tootsies warm.

Next up, a little embroidery project for Taco.
Posted by Clio at 9:00 AM 8 comments: