How long, exactly, is forever?

I cast on this throw blanket in September 2014, during that third trimester creativity and nesting hormone surge. I thought it would be a nice cozy blanket for me to curl up with in the rocker during late night nursing sessions. And it would have been.


But it took forever to knit. 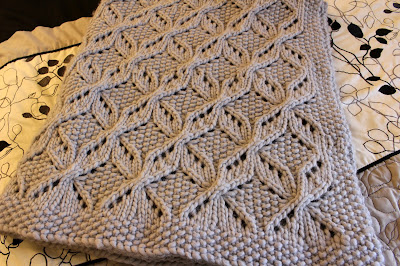 Now don't get me wrong, I did take breaks. Post pregnancy my wrists ached quite a bit and I couldn't do too much knitting. But even with breaks, this was a huge investment in time. I'm glad I like it so much in the end! It is insanely warm. Seriously, if you are a chilly person, knit a wool blanket.

The pattern is Umaro by Jared Flood of Brooklyn Tweed. There is nothing overly complicated or challenging about the pattern itself, as long as you are comfortable with cable knitting and basic lace stitches (k, p, yo, k2tog and ssk.) However, I found the 28 row repeat impossible to memorize because I could only knit a few rows each night. 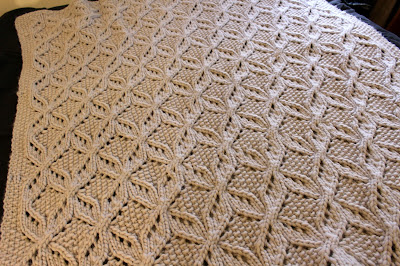 I think part of the reason why a super bulky throw took so long was the yarn. It's Mega by Ella Rae in the Timberwolf Gray colorway. For whatever reason, I found it a very slow yarn to knit. And it knit up rather tight in my hands. I had a whole skein leftover and my blanket blocked a bit smaller than directed. Aside from small projects, I'm not sure I would use it again. It also isn't the softest yarn I've worked with. It's a little scratchy to be honest. But it does look beautiful and exactly how I imagined. 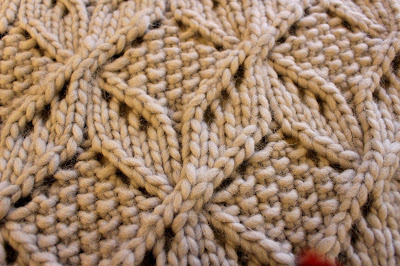 The real magic of this blanket is that it looks all bulky when you are finished knitting, but the lace just opens up beautifully when you block it. Truly, the importance of blocking cannot be overstressed. The instructions say to steam block the blanket. However, I can't imagine being able to use my iron one section at a time and get a nice finished result. Instead, I soaked it in the tub with some Euclan, and then used just the spin cycle of the washer to get the excess water out. 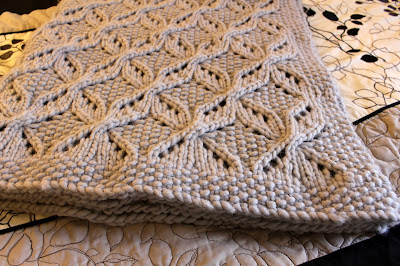 Overall, I am very happy with this blanket. I'm pretty sure I won't knit this pattern again, but I'm glad I took on this challenge and stuck with it.  And now I have my evening knitting time free. What to knit next? I think I'll stick with some quick and easy projects for the next few weeks.
Posted by Clio at 12:38 PM No comments: