D'oh! Apparently, camouflage does not work in an urban environment.

But my nephew, Orpheus, seemed to think that the pants that I sewed for him over the weekend were pretty cool, anyway. In fact, he made such a big deal over how cool they are that now his little brother, Linus, wants a pair too. (Sigh! Why does sewing for others always beget more sewing for others!?!?!) 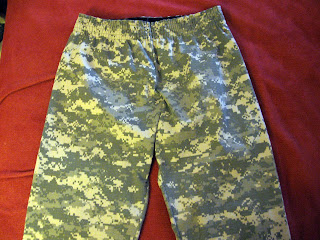 There's not much to say about them. I whipped these up from KS 2276, same as the Goku Halloween costume that I made. They could not be easier or quicker. Each leg is just one piece of fabric. So, you sew up the inseams, sew the crotch/center seam, add an elastic waistband and hem. That's it.

The camo I used is a $2/yd ripstop-like fabric that I bought to use as muslin aeons ago at HM Fabrics. My sister has a difficult time getting pants that fit my nephew correctly; we grow kids abnormally tall in my family. So, these are essentially a very wearable muslin to see if this KS pattern, which is meant for sweatshirt fabric, actually works in a woven fabric, too. I told my nephew he is in charge of letting me know how they fit. For emphasis, I added that he should tell me if they give him "wedgies" or fall down to his ankles in gym class. At first he thought this was funny; then he asked if I was kidding. (Ha ha ha, I am an evil auntie). 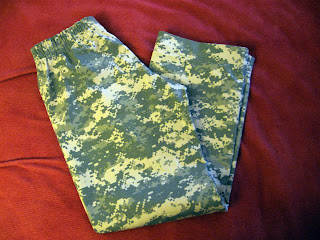 Since I turned them over to my sister while we were out, I didn't get any pictures of the pants with my nephew actually in them. Oh well. I'm going to have to make that a demand for when I sew for others moving forward.

In between bites of pumpkin pie over the weekend, I also managed to squeeze in a bit of sewing for myself. I hope to finish my Karl Lagerfield Burda skirt in the next day or two so, stay tuned!

I hope they fit him. Then again, if they do, you are bound to be sewing loads more! Can't wait to see your skirt. It looked like a pretty complicated pattern.

I like those camo pants. The narrow zipper foot paired with the invisible zipper foot make quite a pair and have been helping get my zippers in more proficiently. Don't tell anybody, but when I get a gadget that I find really useful - I buy two of them. You know just in case (lol).

How nice of you to sew for others, and it's so true that it begets more requests, which I why I sometimes (most times) will say No, I'm just too busy right now - maybe for another project! I'm looking forward to seeing the Lagerfeld skirt - I've had my eye on it since seeing it last fall, but my legs would never do it justice!