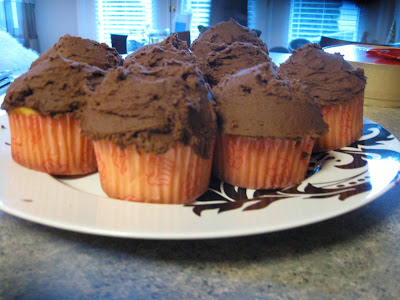 I've been wanting to test out Chocolate Buttercream recipes pretty much since my vanilla buttercream frosting went over so well at Dr Kiang's shower. Magenta's birthday seemed like an ideal opportunity to make cupcakes, so off I went to the kitchen.

I used my go-to yellow cake recipe from King Arthur Flour. Honestly, if you like to bake, even occasionally, and don't own the KAF Bakers Companion Cookbook, you are missing out. Anyway, I halved the recipe to make just 12 cupcakes, since we weren't going to be that large a party.

The jumping off point for developing my take on chocolate buttercream was this recipe from Martha Stewart. It is similar enough to my vanilla buttercream that I was pretty sure that the results would be good. The real questions was just how chocolaty it would be. Here is what I ended up with (keep in mind that I halved the frosting too - this is enough for 12-15 cupcakes to be generously frosted):

Whip the butter with a hand held beater or stand mixer for a minute or two to get it softened up. Add the melted chocolate and vanilla, and beat to combine. Add sugar and turn beater on low so you don't create a dust storm. Gradually increase speed to get the sugar incorporated. At this point, I tasted the frosting and decided it was nice, but not chocolaty enough for me. So, I added 2 tbsp of cocoa and beat to incorporate. Better!

In the future, I will probably use more cocoa and a bit less sugar - 1/3 cup of cocoa and 2 cups of sugar should be about right. I really like my chocolate dark. But if you are a milk chocolate lover, this version will be heaven for you. 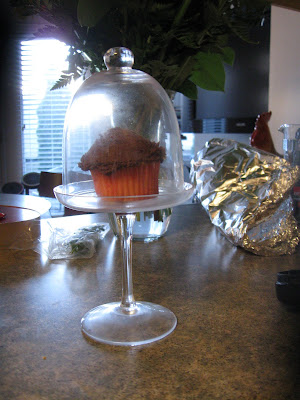 One leftover cupcake for Magenta.

Also, our day of crafting was fantastic. I didn't get to the tee renovation, but I now have a working pattern for Magenta's summer pants. Magenta herself worked on knitting a mouse stuffed animal for a baby gift, and Dr Kiang made a necklace for herself. More on my projects later this week.
Posted by Clio at 11:57 AM