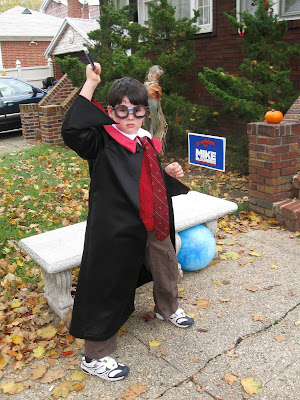 Stupify!
This year, my nephew Orpheus paid me a huge compliment by deciding against getting a new costume for Halloween. He went as Harry Potter again, in the robes I made him last year. It's a good thing I made them long last year, because he really shot up! 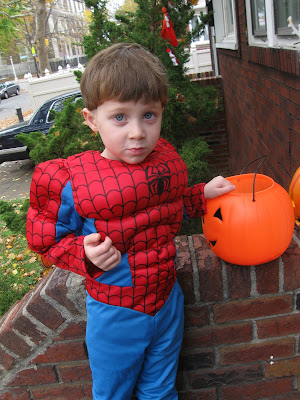 His brother Linus decided to go as a superhero, instead. For some reason he wouldn't smile for the camera. This is the most - just a hint of a smile - that I was able to catch. Although, he did lots of smiling at other times. 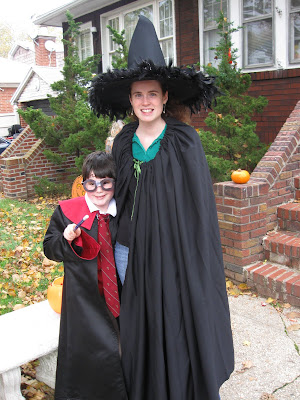 And again, here is Orpheus as Harry with his mom, Calliope, who also went as a witch. I was invited to come trick-or-treating, as long as I was willing to go in costume. Orpheus was horrified that I was planning to go as as the Harry Potter villain, Bellatrix Lestrange. So, we compromised and I went as his friend, Hermione Granger, instead. And if my mom sends me pictures, I will post one of my very excellent costume.

Update on December 6: Here are a few more photos.... 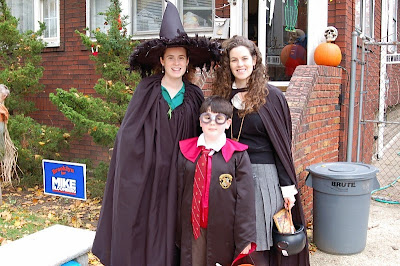 Calliope, me (note the cauldron with the copy of Beedle
the Bard's tales in it),and Orpheus as Harry in front 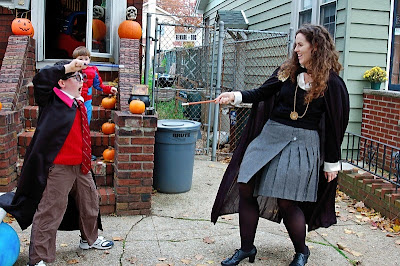 I don't think Harry and Hermione ever dueled in the Harry Potter series,
but we dueled over the time turner I'm wearing around my neck.
Posted by Clio at 12:17 PM

I can't wait to see your Hermione costume!!

Nope. Mom told me that Mayor Mike has supported teachers and that won her over. Not sure what dad's opinion is.