Phineas here. As you may or may not know, I will freeze anything! Chocolate, taters, pies, dumplings, you name it and I 've frozen, defrosted and eaten it . When you don't want to cook, it's nice to just reach in the freezer and have a yummy meal in minutes. So the latest version of freezer-to-table cooking involved some short ribs that I braised a few weeks ago but, because of our schedules, never managed to eat. Into the freezer it went! Wanting something different than the usual short ribs with mash (we just had our pre-Turkey Day turkey the night before), I decided to make some quick short rib ravioli.

First, I made fresh pasta dough and rolled it out into sheets for the ravioli. (I know this is not exactly fast, but wonton sheets from the supermarket will also do just fine.) 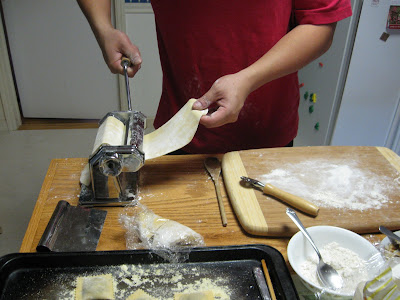 While resting the dough, I shredded and reheated the short ribs, reducing it in its sauce until it became the consistency of sticky Sloppy Joes (hmmm... now there's an idea!). Next up, fill the wonton/ravioli and cut to size. No directions here, but you can make them as big or as small as you like. Let them hang out while you boil some agua and make a quick sauce. 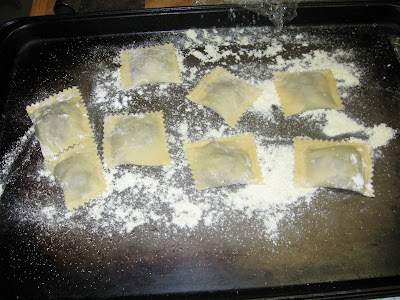 Tonight's sauce was sauteed garlic, shallot and mushrooms tossed with butter and roasted grape tomatoes (1. cut up a container of tomatoes, add some chopped garlic - season with salt and pepper and drizzle with a healthy dose of oil/your choice 2. place in a 300 or so degree oven or toaster oven 3. stir every so often until it becomes a sticky reduced chutney-like substance 4. use in recipe or put on sandwiches instead of yucky out of season tomatoes or mayo, which is super-yucky in Clio's opinion). 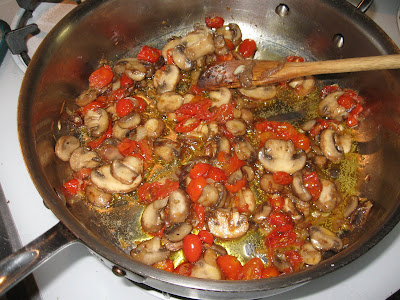 Cook the ravioli, toss in pan with sauce and voila dinner is served! 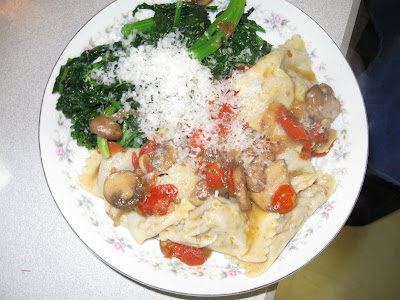 P.S. Easier version (assuming you have cooked short ribs around) : Cook up sauce. Add reduced and shredded short ribs. Got a bag or frozen peas? Toss a handful of those in to heat through. Dress your favorite fresh or dried pasta (papparadelle would work great) or frozen cheese ravioli. Shower with parmesan or pecorino cheese and eat!
Posted by Phineas at 12:22 PM

Yes, readers, I'm with you on this one: only Phineas would call this a "quick and easy" recipe. Even with wonton skins and assuming I had braised short ribs in the freezer, this would take me a while.

That said, this was an absolutely luxurious dinner. And the night before Phineas had cooked pre-Thanksgiving turkey, stuffing and mashed potatoes. I guess he must have missed me.

YUMMMY!!! I am going to share with J. and see if it encourages him to take out the pasta making machine. I could eat this tonight!!!