Over the weekend I started work on my first BWOF garment and also another tee shirt refashioning project. Both are halter-style tops, which seems like a recurring theme in my recent sewing. I guess I like what I like.

Here's the top I'm making.
Anyway, I took yesterday off and traced the pattern. BWOF includes all the patterns they feature in the issue on a few sheets of paper in the middle of the magazine. How do they fit all those patterns onto a few sheets? Here's how... 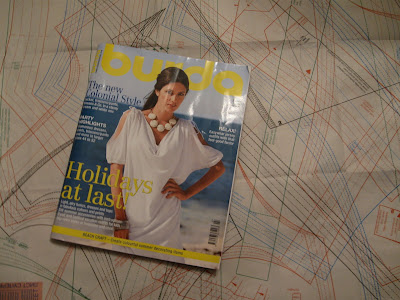 Each pattern is drawn overlapping but in a different color.
You have to trace the pattern you want from the jumble. Oy vey!
It was only after I finished cutting it out that I remembered that Burda does not include seam allowances and that I would have to draw them in myself. Uuugh. So, it looks like I will be doing some retracing.

For the fabric, I am going to use the black jersey I picked up from Metro Textiles recently. I also may have enough leftover jersey from my maxi dress to make a second top - if I like how the first one comes out. The one thing that could hold this project up is that it calls for something called "Vilene bias tape." Apparently this is some kind of bias binding that you can fuse on with an iron rather than sew. Assuming I can find it, it should make sewing this top pretty easy.

It is very strange that it is almost August and I still feel like it isn't quite summer. New fall sewing patterns are being released and back to school sales are imminent, but I just can't deal with it yet. I'm still craving warmth. Does anyone else feel that way?
Posted by Clio at 12:28 PM

I feel so ripped off! Last summer I was too busy to enjoy it, this summer hasn't happened, yet but it's already half over! WTF!

And ya know, I have winter clothes and summer clothes, but not a lot of in between clothes so I've been looking sucky and repetitive!