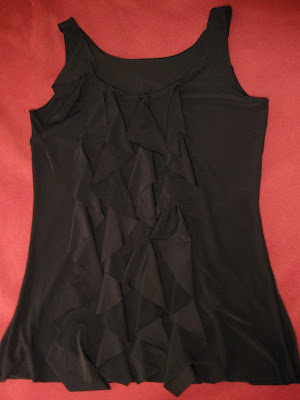 My Butterick tank top with flounces was really coming out well. All that was left to do was bind the neck and arm holes, and sew the hem. Then, while I was trimming the side seams, this happened: 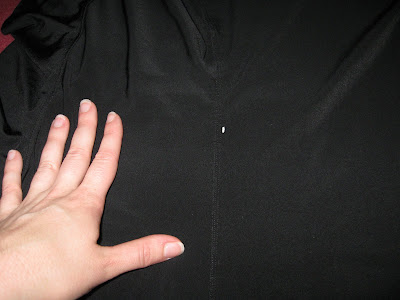 No, that white dot in the middle of the photo is not a scrap of lint,
it is a hole. A hole that I somehow cut in the tank top.
Maybe the slip of the scissors was freudian. I had purchased the jersey at the same going out of business sale that I purchased Phineas' shirt fabric. And, like the shirting, I'm not so crazy about it. Once I put the tank top on, I disliked how it felt and draped. So, I have decided that this unfortunate accident really is ok, and that this was just a test draft for the next model of this shirt.

So, yesterday, I walked over to Metro Textiles and bought some black jersey, which I think I will like better - it is more matte and not so slinky. Some of the changes I will make to the pattern before cutting are:
Over this weekend, I hope to finish up my maxi dress, which is really coming out great! (knock on wood).
Posted by Clio at 12:59 PM