As usual, I didn't get as much crafting done over the weekend as I would have liked. But I did make some good progress on a few of the projects I outlined on Friday and not so good progress on others.

The Good
My maxi dress is ready to be cut out. I just have to spend a little time laying it out so that the pattern falls attractively. 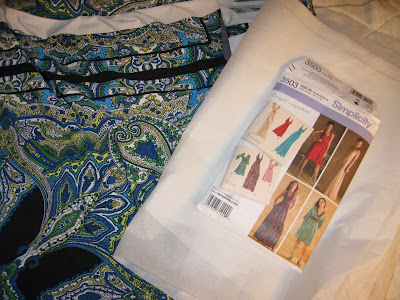 And this tank top is also ready to be cut from a slinky black jersey from my stash. 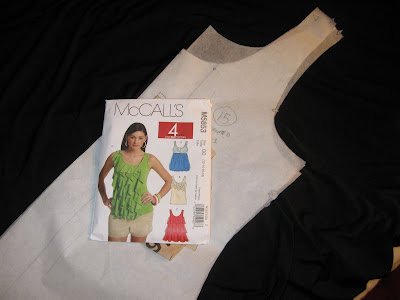 The front pattern piece looked rather large once I cut it out, so we will have to see how it goes. I am not a good judge with knits since my experience so far is pretty limited.

The Bad
My final piece of pattern prep work was for Magenta's pants. Unfortunately, that did not go very well. I was a very inexperienced sewist when we decided to make her pants. And the patter that I made from her pants has several major flaws. This project really is one step forward, two back.

Also, my "Editing" didn't go so well. I thought that the pants and capris that I wanted to alter would be a cinch. But neither worked out quite as easily as I thought, so I have some finessing to do.

The UGLY
I did sew the button holes onto Phin's too snug shirt. Buttons will be added in front of the tv during the week and then I will post a photo or two. Why ugly? Mostly because the project just irritates me. In addition to the shirt being snug, I've decided that the fabric is cheap. I got it on sale, so it was actually cheap. But it just doesn't feel great and the fabric looks like it has little pulls where I sewed the button holes.

Finally, I am trying to do a spring/summer cleaning and get rid of clothing, books and all kinds of things that I just don't need/want. One thing I don't know what to do with is the growing bag of scraps that I've accumulate thru sewing. The scraps aren't really big enough for other projects or to use as rags, and I don't know if I can find a purpose for them. Any suggestions?
Posted by Clio at 2:31 PM