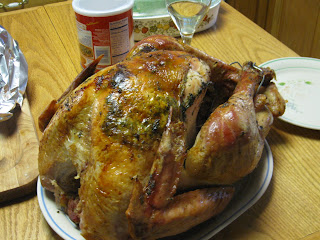 Yesterday's Pre-Thanksgiving turned out to be a bigger deal than Phineas and I had planned. Usually, it is just the two of us and maybe a friend or two indulging in too much gravy. But when my MIL learned that we were cooking, the event mushroomed and the rest of Phineas' family joined in.

Phineas' turkey was perfect and his stuffing was delicious. He added some walnuts for crunch and some currants which were languishing in the pantry for sweetness. It was to good effect. He really has a way with roasts. This bird was treated to a butter and herb massage.

The apple-pecan tart was also a hit. Even Miss Julia ate two slices, although I suspect that she was in it for the home-made whipped cream sweetened with vanilla sugar. I had to chase her away from the bowl more than once before dessert. 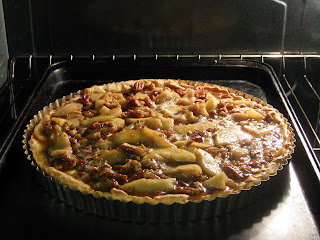 Is there any aroma more heavenly than pie in the oven? Doubtful.

Anyway, this tart was definitely the love child of apple pie and pecan pie. It has some of the qualities of both - the sweet nuttiness of pecan pie and the warm perfume of apple. I ended up using some Lyle's and some maple syrup, which worked out well. I think next time I would saute the apples less so that they were firmer in the tart.

I used the tart shell recipe in the NY Times article. It was essentially pie crust but with the addition of an egg yolk, which made it a much softer and pliable dough. I didn't love it as much as my crust, but for the purposes of this tart, it worked well. So, I give the recipe two thumbs up with a dollop of whipped cream.
Posted by Clio at 9:47 AM

Labels: Domestic Goddess in Training, In the kitchen with Phineas