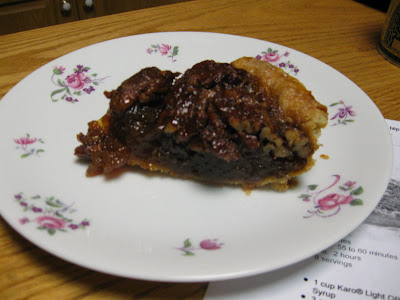 MMMmmmm...
On Monday night, I made another pecan pie. This time I used my usual pecan pie recipe (i.e. the one on the back of the corn syrup bottle) and just substituted Lyle's Golden syrup for the corn syrup.

The merit of the Karo recipe is that it's easy as... well, you know. The only change I made was the addition of a little kosher salt (1/4 tsp) to the batter and a pinch sprinkled on top before the pie went into the oven. As always, I egg washed, sugared and then covered the crust with a pie shield. 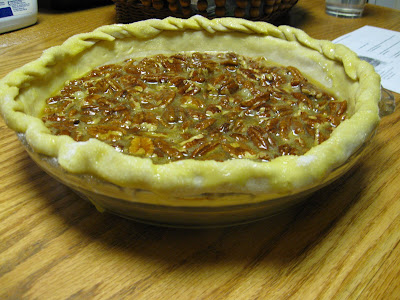 This time I remembered to take a picture
before the pie went into the oven...
It can be tricky to figure out when a pecan pie is done because the filling will still be liquid-like even when it is done. It sets as it cools. My surefire way to guarantee a pie that is done, but not overdone: check it with an instant read thermometer. An internal temperature of 200-205* is perfectly done. However, this time I was worried about whether the Lyle's would set the same as the Karo and by the time I took the pie out of the oven it was 208*. 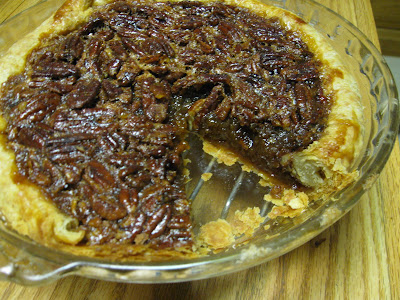 ...And after it came out, but not before I cut into the pie.
The results: Heaven. The flavor was spot-on. It may even have been slightly better than the corn syrup version thanks to some caramel and brown sugar notes. The texture, however, was slightly different. It was more firmly set than the karo pie, which made it seem ever so slightly jelly-like. I am guessing that this is because of the way cane syrup sets as contrasted with corn syrup. I would be totally happy with this pie for myself, but I think I am still going to tinker with it for the texture. Two options: take the pie out a little sooner (at 200*) or see if adding 1/4-1/2 a cup of cream would make it less firmly set.

Gosh, I wish that I was one of your testers! I need to try to experiment as well!

Okay...so your blog regarding pie crusts inspired me. I usually use the insipid pre-fab frozen crusts simply because I fear failure. I've seen my hubby curse pie crusts that stick to cutting boards and had a friend who gained 15lbs while finding the right one. I don't have time or the money to buy a new wardrobe in a bigger size to find the right one. So, since you had done the dirty work and found a quick and easy and good one - I put together a crust between kissing Jay goodbye and waking Stephen up this morning (it took about 12 minutes).

So, I rolled it out and noticed it is a bit thicker than its distant cousin, the pre-fab. I feared I made two crusts and summoned Jay. He was in awe with the ease that I rolled it. He said he was very jealous.

So, I just put together the filling and am just waiting for the crusts to cool for 30 and the oven to heat up. I will let you know the results.

Mar - So sorry I missed your call last night! Can't wait to hear about how the pie came out. Yes, this crust really is easy, isn't it?

I need more testers or I am going to be in the same boat as your friend!

Sorry I missed your return call! I sometimes call friends with knowledge when I am desperate. I've never made pecan pie nor pie crust before. The pie looks really good! Although I had originally planned to take it to work, I decided we needed to test it out first. After all, Jay bought the pecans and pulled the pie out of the oven and took its temperature (exactly 200). It would be just unfair to give it away trying it first.

I will let you know the results.