One of the sewing tasks I did this week was to work on the muslin for my Kwik Sew Cami. And boy-oh-boy am I glad I'm into muslin at the moment!! I would have been so sad if I had used my pretty silks for this! 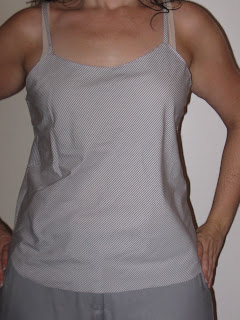 OK, I admit it: it doesn't look too bad in the above photo - it just looks like it needs some tapering from beneath the bust to the waist. However, a closer look at the armpit is revealing: 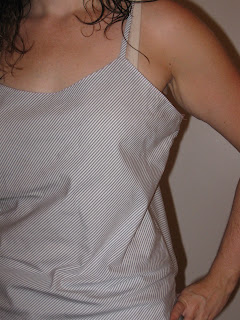 There is a lot of gaping - the fabric stands several inches away from my body. However, when I tried to take it in at the side seam, somehow it seemed to pull and not fit right across the bust. I also tried creating some darts with the extra fabric, but this also didn't really work at all. This has led me to a conclusion that I have been avoiding for some time: I need an FBA. (Non-sewing friends, this is a "Full Bust Alteration". Sounds rather drastic, doesn't it?) It fills me with dread.

Why dread?  Well, first, it seems somewhat complicated, involving cutting up, shifting and re-assembling the pattern. Second, I have a feeling that once I do it to one pattern, there will be no going back. I will have to make a series of alterations to every pattern I sew. Yes, before you say it, this is something I should have been doing all along. However, I seem to have been wily enough to choose patterns that have a forgiving fit across the bust. And I was acting under the assumption that my bust would be smaller post-weight loss and I wouldn't need to learn how to do an FBA at all. Alas, no.

But my craving for lingerie must be satisfied. So, FBA  here I come. Stay tuned. And if anyone has any thoughts on doing an FBA for a bias cut cami that has no darts, without messing up the grain, please do share!

PS - My panties, post-alteration, have been worn and are perfect! More of these to come!

I agree that it looks good in the picture. If you need an FBA, a simple camisole is probably a good place to start. But it does sounds daunting. Good luck!

Thanks! Yeah, trust me, it looks MUCH better in the picture. The muslin is much stiffer than the silk I will ultimately use, so it stands away from my body. There are extra inches at the side seams.

Have no fear, FBA's are a lot easier than you might think. I hate doing them too but it's a necessity for me with my gigant-o girls. I'm not sure about the bias, though. Once you put a dart in there, it'll definitely mess with the grain. I think you can rotate the dart but I'm not an expert on that. You might want to check out Debbie Cook's tutorials. I think she has one for that.

I am so intimidated by an fba, and agree with Karin starting with cami is good place to start.

maybe its too big did you try a smaller size?

Thanks, all. Yes, it needs to be smaller, but with more room in the bust.

Why dread?? Don't you know about these great tutorials? http://stitchesandseams.blogspot.com/2001/02/tutorials.html

Your muslin came out well. The very upper armpit area is where a lot of busts start to go back in on the sides - you are over the - er - hump - so to speak. I have had several sleeveless pattern angle out there and can't imagine why the designer made them that way. I'm looking forward to seeing your silk versions - silk is so lovely.

Thanks, everyone! Yes, what would we do without Debbie Cook and her wonderful tutorials!?!?