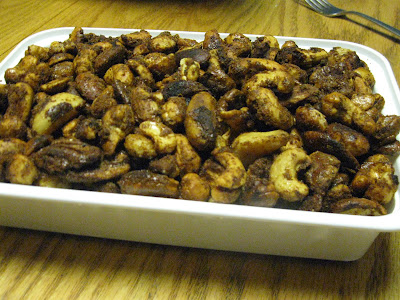 First try: Indian spiced nuts
Phineas has suggested, on more than one occasion, that I may have "a problem" with nuts. A cocktail lounge has only to offer nut mix to secure my good favor. And I eat more peanut butter than any adult I know who does not have children as an excuse. And don't even get me started on Nutella. But I digress...

On Saturday, I took a first stab at spiced nuts for our holiday gifts. I used a recipe that was heavy on the spices - garam masala, cinnamon, cumin, and cayenne. I didn't tinker with it because I have suffered several spiced nut disasters in years past when trying to add hot almonds to room temperature egg white. Not good. And this recipe avoids that entirely.

Anyway, I did a double batch, and midway thru discovered that I had overloaded the pan. So, they are not the prettiest spiced nuts. However, the real test was the taste. I brought a batch over to my parents for a family gathering on Sunday. My aunt, a fellow indian food enthusiast, loved them. So did I. But Calliope and Erato thought they were "a little strange". Hmmmph. I guess that garam masala is not for everyone.

My next attempt will be more of a glazed nut, sticking to the more familiar territory of brown sugar and cinnamon.
Posted by Clio at 10:49 AM

Yeah, the spicy ones would be right up your alley.

I like that idea with garam masala. I have a similar one I have used(no egg whites) and we love them - I actually have the recipe here at work 'cause someone wanted it:
1/2 teaspoon of the following: ground cumin, chili powder, curry powder, garlic salt(for years I used garlic powder);
1/4 teaspoon cayenne powder, ginger, cinnamon;
2 tablespoons olive oil
2 cups shelled whole almonds or pecans;
1 tablespoon kosher salt

Preheat the oven to 325.
Mix all spices in a bowl.
Heat oil in a nonstick skillet. Add spices and simmer to mellow the flavors (3-4 minutes).
Toss nuts and oil mixture and spread in a single layer on a baking sheet. Bake for 15 minutes, shaking twice.

Remove from the oven, using a rubber spatula, toss nuts with any spices and oil that have accumulated fon the bottom of the pan. Sprinkle with the kosher salt and if desired more garlic salt.

Let rest for 2 hours and store in an airtight jar.(whatever - I eat them at this point).

From: The New Basics by Julee Rosso

Hmmm, that would definitely fix the problems with egg white. And the nuts definitely wouldn't stick to the pan, which is the problem I had with this last batch, I think because of the egg and not greasing the pan. I'm gonna have to give this a try. Thanks, Mar!!