Finally! Just 3 days short of my due date (um, one now), I managed to finish the first of the two diaper bags I've been working on.  This one is for Phineas. 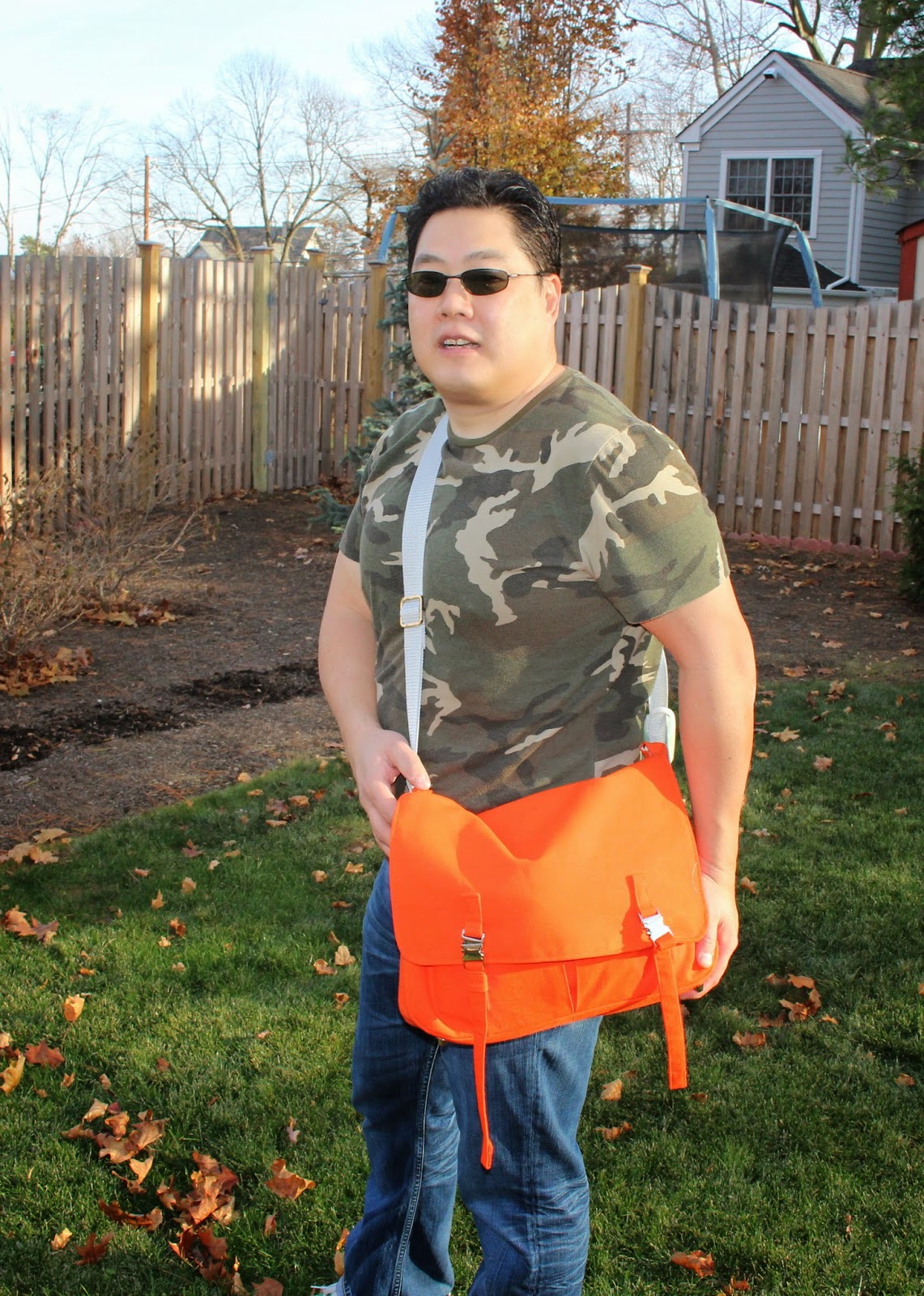 The "Daddy Diaper Bag" is definitely a generational concept. It's really quite normal for current new parents. Just google "daddy diaper bag" to get a sense of what's out there. But I've been met with a variety of interesting responses from our parents' generation - laughter (like I had made a joke), surprise, raised eyebrows, questions - when I said I was making Phin a diaper bag. Did fathers really not take their children anywhere on their own before they were potty trained back in the day or did they carry their wife's bag? I'm really glad norms have changed and fathers are now much more active parents and partners. Anyway, since Phin is already talking about the many things that he and Raspberry will do together, he certainly deserves a fun bag that he is happy toting around.


Orange is Phin and my shared favorite color. So, I used a bright orange 9oz cotton canvas that he picked out  for the outside and a fun retro cotton print that has the sort of ads you would expect to see in  the back of a 1950's  comic book for the lining - x-ray glasses, toy rocket ships and spy gear. I think it's a fun combo.

Phin wanted a messenger/cross body bag and he also didn't want it to be too large, so I used Vogue 8990 view C. There is nothing about it that makes it a diaper bag, and I sewed it with just a few changes to adapt the bag to Phin's specific requests and needs. It's a great pattern - just the right size, well constructed and versatile.

Hardware
I love using hardware in my bags. I think it gives a much more professional finish and makes for a sturdier bag. I understand why pattern companies don't  use more in their patterns - you can't find a lot of specialty hardware at the local fabic or craft store. But I wish they did give more options since most hardware (buckles, sliders, magnetic snaps, webbing) can be purchased on Amazon. That said, this pattern uses much more than most - a big step in the right direction.

For Phin's bag I used quick release buckles for the closures, I added a bar and slider to the webbing strap so the length would be adjustable, and I added feet to the bottom of the bag. I interfaced with fusible hair canvas and used artists plastic canvas to give the bottom of the bag support.


Pockets
The view that I made of the pattern already comes with two terrific pockets under the flap, which will be useful for holding little toys or teething rings and other small things.

In addition, I made a few design changes to the inside of the bag to make it more suitable as a diaper bag. Phin specifically asked for a zipper pocket so he would have somewhere for his phone and wallet where they couldn't fall out. I rely heavily on Kenneth King's Craftsy class whenever I sew a welt, which I blogged about back in January and there is a whole "chapter" on zippered welt pockets which I've been wanting to try.

I also sewed a big pocket with an elastic top for holding diapers, wipes and such.


Finally, though not a pocket, I added a lanyard with a D-ring for Phin to attach his keys since he carries them on a carabiner.


Changing Pad
The one (very needed) accessory that I made was a matching changing pad.


There are patterns and tutorials out there, but I used the finished  inside measurements of the bag to come up with an appropriate size mat (14.5" x 33") instead. I cut pieces in canvas, lining and batting, and then trimmed the corners into curves using a round coaster as a guide. I laminated the lining fabric with iron-on vinyl, which works surprisingly well. This way the changing pad can be easily wiped down. The whole thing is simply sewn together using bias tape around the perimeter.


And that's it.  After so much simple sewing, it was really nice to sink my teeth into a more involved project. Bags aren't difficult at all, but they do require slow and precise sewing, good execution, and the thoughtful use of hardware and underpinnings for structural support. Really, they are a series of small tasks. What was nice about sewing this while I have been on maternity leave is that I could work in little bursts when I had good energy and attention, making one pocket or component at a time. 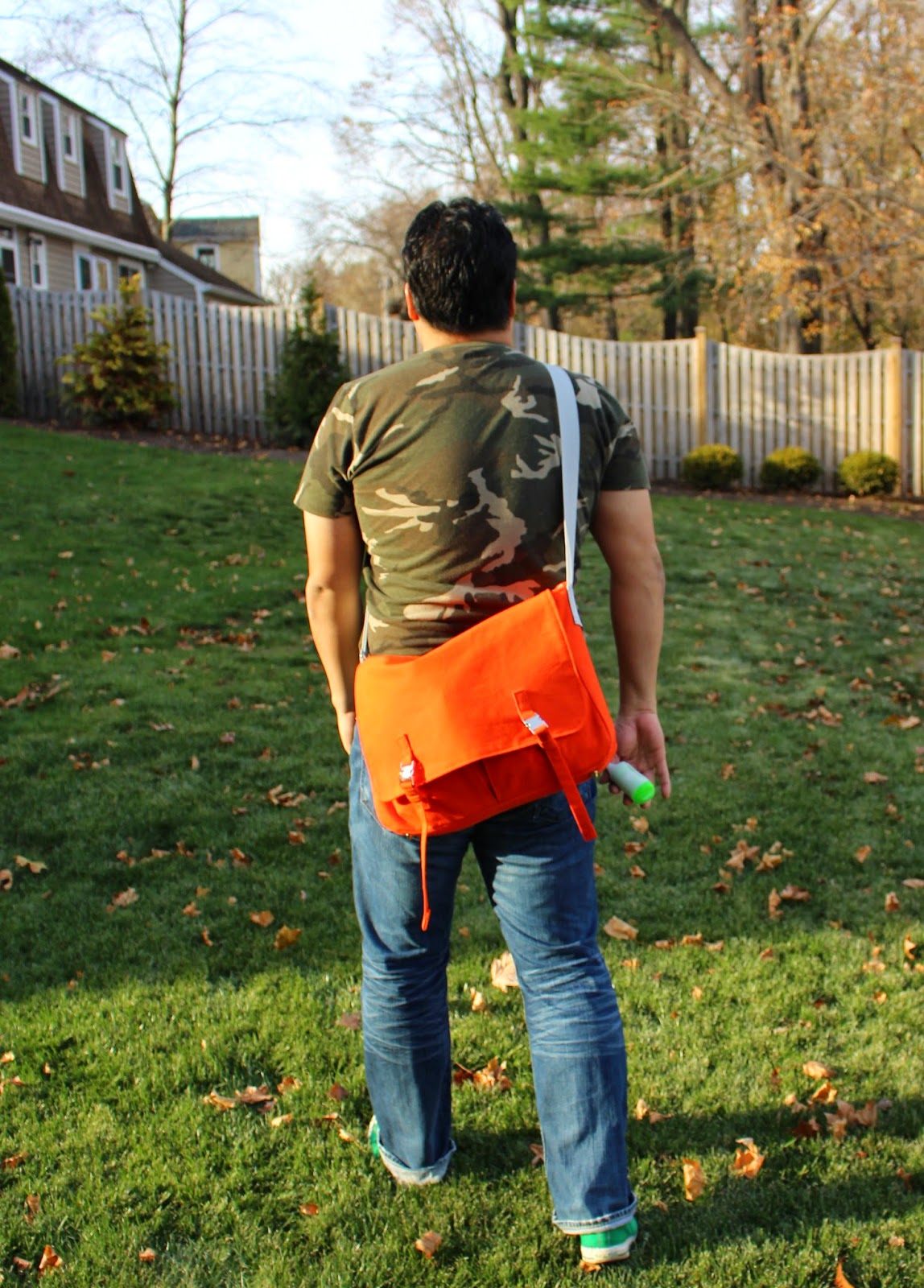 After making six diaper bags for others over the years, it's nice to have finally made one that is staying here. And I was happy when Phineas commented that the bag was comfy to wear.  I hope it gets lots of use.
Posted by Clio at 12:19 PM

We have one - it goes where the baby goes, and there is only one of him! The bag you've made is fantastic. In the UK they are ludicrously expensive and none are as nice as Phineas's

Why not one unisex bag that stays with the child? When we split the pickup and dropoff, we left the bag in her cubby at the daycare center.


We used a purchased pad/diaper holder thingy and then put extra outfits in ziploc bags. We carried food in a small cooler. That all went into a backpack we already had.

What a great bag! It's so cool and fun! Phin looks awesome with it!

Thanks! They are ludicrously expensive, aren't they?!?! I have a feeling this will be the every day one and mine (which is larger) will be for when we will be out for a whole day or when we need to pack a lot of things for the baby to be with grandparents, etc.

Well, after sewing 6 different bags over the years for friends and family, I had clear ideas about what I would want (read: not unisex). But more important, my decision to make two was philosophical. So much fuss is made over mothers-to-be (rightly so since pregnancy is not for wimps) and very little over fathers-to-be. Phin has been such a tremendous support and I know will be an equal partner in parenting. So, I thought he deserved his very own bag made to his specifications - a little spoiling for the man who has taken such good care of me through this pregnancy!

It's very him! Thanks!

Those are great reasons. And that's a bag anyone would be proud to tote around!

He's one cool papa! Love how the bag came out. And the elasticated pocket idea. And the matching pad. And Dragon the Hippo!

Best of luck with the Raspberry delivery! Hope it'll be smooth sailing.

Thanks! He sure is!

This is a great bag! I had a horrible time finding baby accessories that weren't embarrassing for my husband to carry around. Like you, I had to make my own. I love the color and the pockets.

THAT BAG IS GLORIOUS!!! you are so right about careful execution. i made one in my first year of sewing for a friend, and raced through it, it was a total failure. friend never got it.


phin, it looks like a bottle of high west would fit beautifully on its side, across the bottom of that bag. for when daddy needs a treat.

I love it! But I also love orange and 1950s stuff, so...
Where did you get the retro print fabric? I think I need some!

fabulous bag and fabrics! And ditto on the separate bags. (Would you use your partners purse?) I hope the birthing goes well, but don't expect to be on time :)

Fantastic! Love how hippo is helping with the diaper-changing training!

So smart!! (in all senses of the word)

So funny - I bought some of that comic cotton for a gift for a friend a few months ago! Love the way you used it. Your bag looks awesome. Good luck with all the exciting things that should be happening very soon!

Thanks! I got the fabric at Fabric.com, but it seems to be sold out. It's a Riley Blake fabric that is part of their "Rocket Age" collection, so I'm guessing you'll find it elsewhere. I thought it was super fun too!

There are a lot of welt pocket methods out there. This is just the one that seems to work for me for some reason. It could be that it's the teaching method/medium or maybe that I relate best to watching with spoken instructions instead of pictures and writing. I don't know. I find KK to have a very simple, step by step approach that seems not overwhelming.

Phin says " Mmmmmmm... and good for teething, too... Must send back bag since it was not fully stocked, apparently!"

He did check that a flask fit in the front pocket.

Yeah, neither of us would be caught dead with a Winnie the Pooh bag or something like that. We also did his-and-hers carriers so we would each have one that was comfy for us and that we were happy to be seen in.

He likes to get in on the action. Many rude noises were made during D-Hippo's help to "make things more realistic" as he put it...

Very, very cool! I love it.