Since Oona's not a stickler for rules or deadlines, here is my Oonapalooza dress - better late than never! 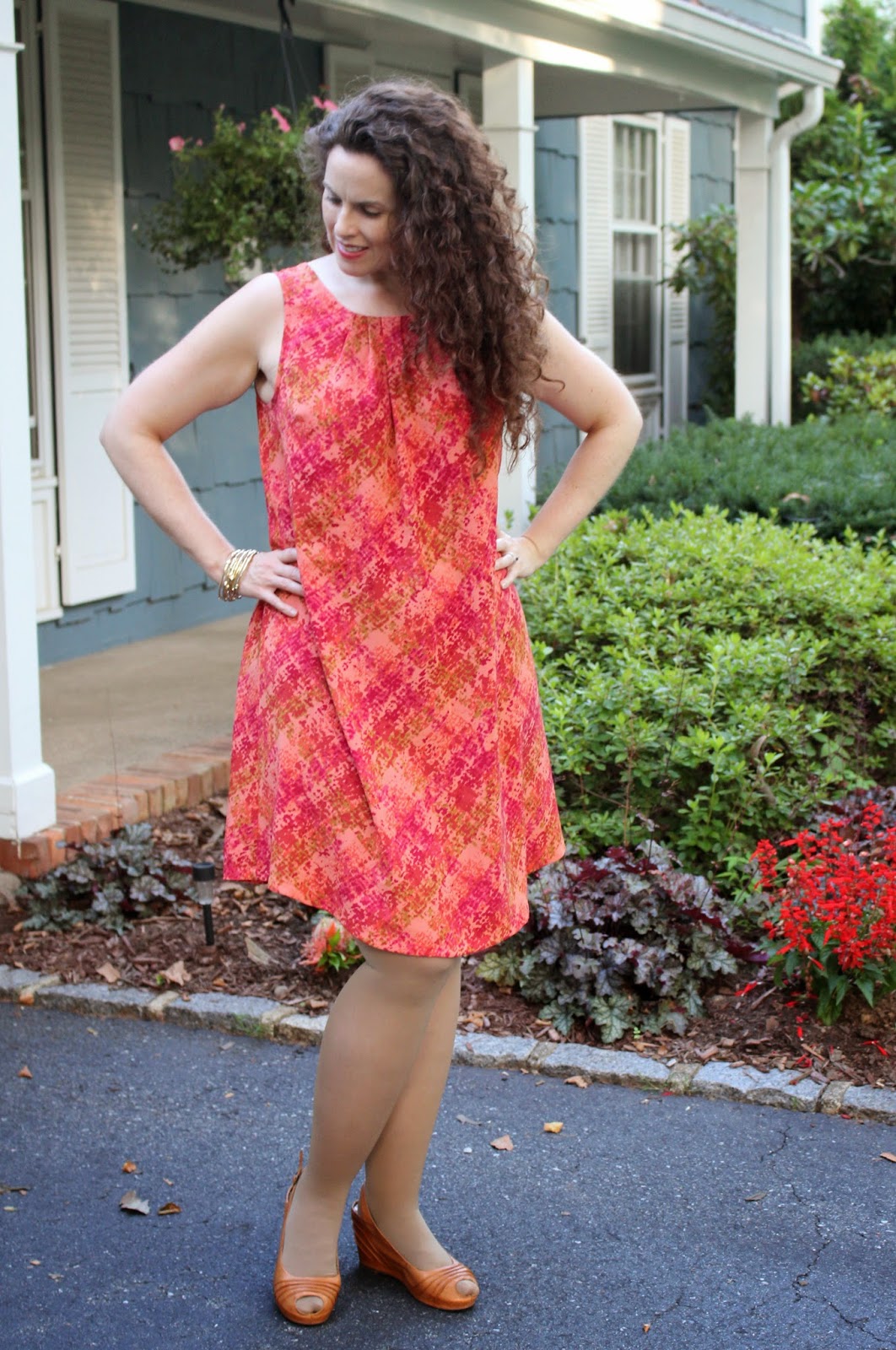 The really fantastic detail of this dress is the peek-a-boo back. 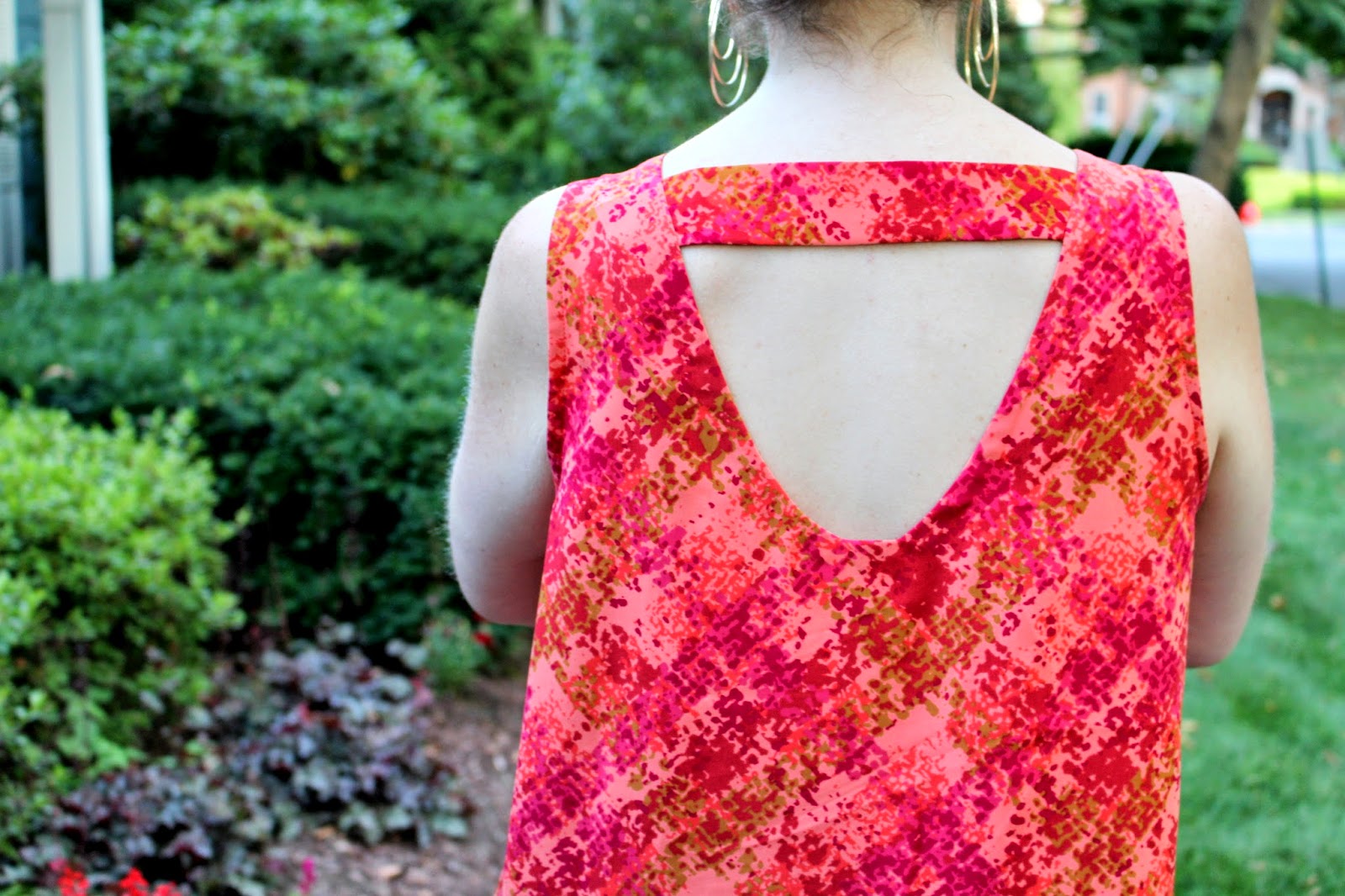 This is a very different style for me as it's loose and flowy, but I've been going through a phase of experimenting with volume. There are a series of pleats at the center front neckline and side bust darts which softly shape the top. I think for my figure this soft shaping works better than unshaped, over-sized or boxy looks. Not that I think you'll see a major shift in my style, but - holy moly! - it's so easy to fit these loose and drapey garments compared to my normal fitted attire. No wonder it takes me forever to sew anything with all the fitting I do! This could have been done in a day. 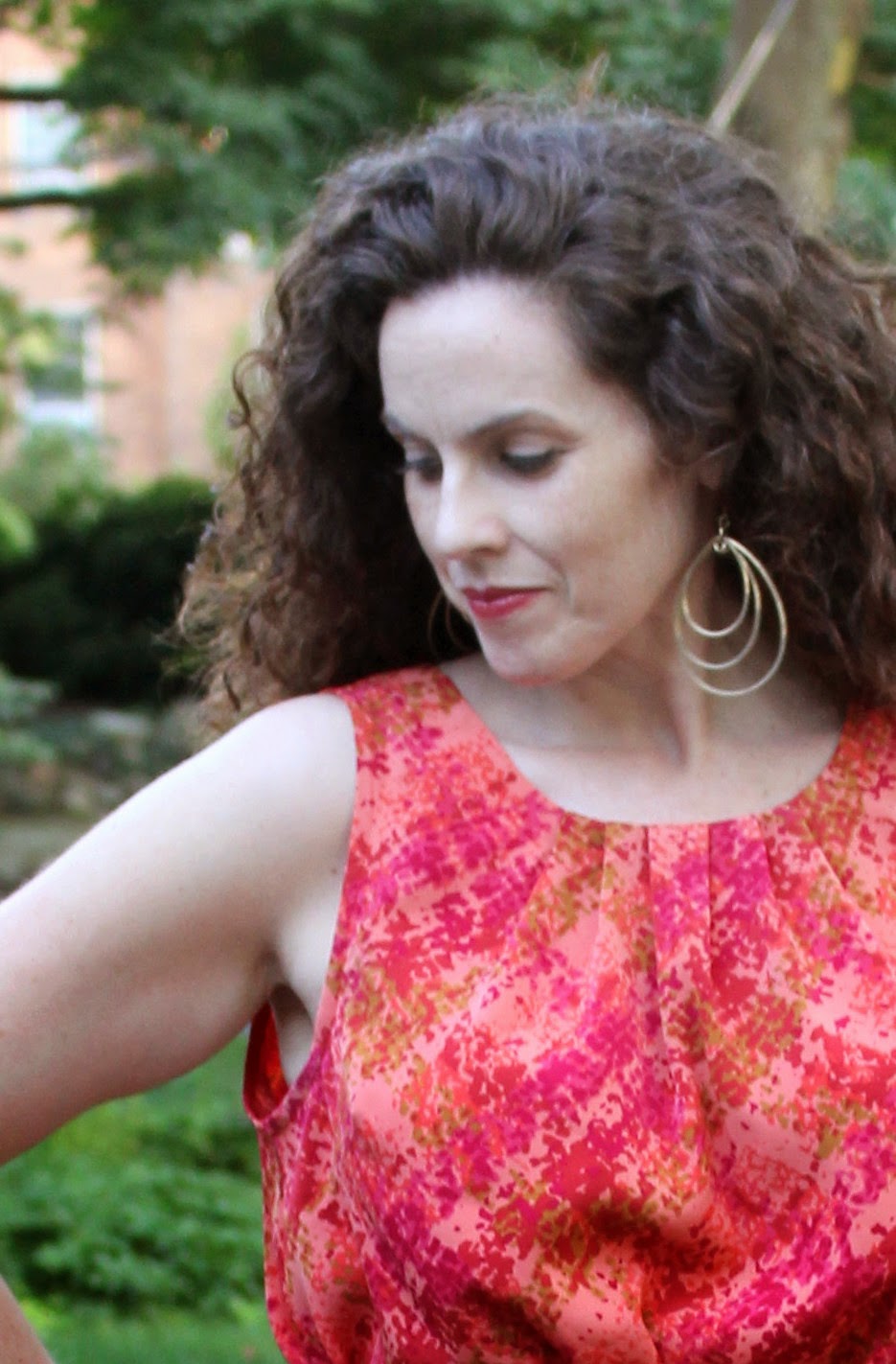 I cut a straight size S (8-10) for this pattern since I normally start with a Vogue 10. Aside from lengthening this blouse into a dress (I lengthened at the 2 lengthen/shorten lines as well as the hem), the other changes I made were to omit the faux button band with buttons since I didn't think sitting on buttons would be comfy, and to shape the front hem. The back hem is curved, like a shirttail, but the front hem is drafted straight. I decided to mirror the curve of the back hem on the front. I like the effect, both with and without a belt. 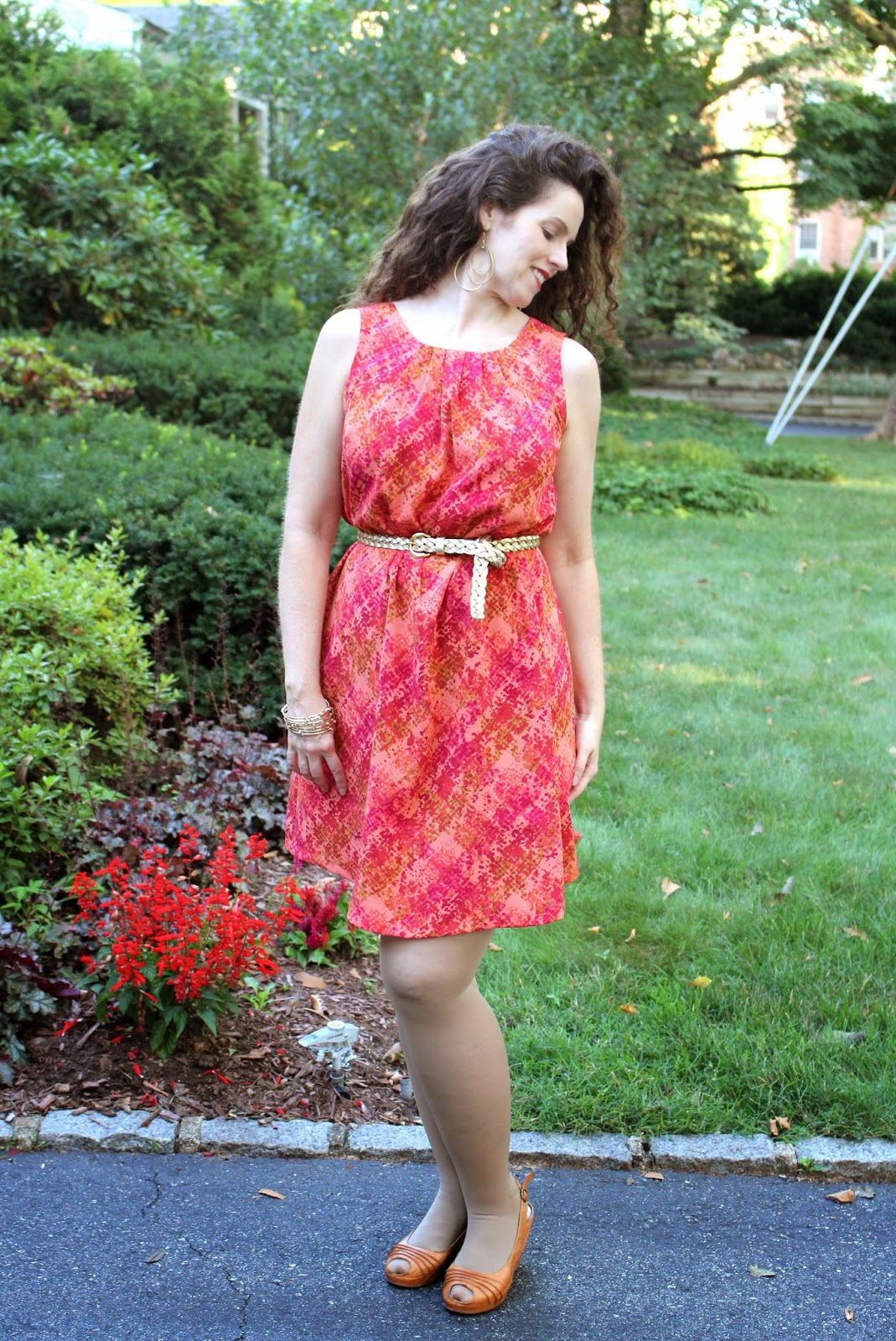 The fabric I used was a gift from the Sewing Cave. It's some kind of woven poly that is heavy enough to not need lining. I usually lean toward natural fibers, but this fabric feels great on, was pretty easy to work with and is virtually wrinkle-proof. These photos were taken after a full day at work including round trip commute and lunchtime walk in the NYC summer heat, and it still looks like I just put it on.

The longer I sew, the more I find that marrying fabric to pattern and choosing the right set of techniques to work with a fabric's natural properties, rather than fighting them, really is the key to success. Since this fabric was ravel-prone, I finished all the seams as well as the hem allowance with my serger. One small challenge I had was that it's wrinkle resistance also means that it will not hold a crease and that imperfections won't "steam out." So, I used teeny tiny stitches (1.0 length) on the darts as I neared the point and really tried to sew right on the edge in order to minimize any bubbling at the tip.

The only moments of frustration that I experienced were when it came to the neck and arm hole facings. I know that half of you just rolled your eyes and said "well, duh!" at the mention of facings. I made the dress on a whim, and so wasn't really thinking too much about how I wanted to finish things. Since it's not lined, I just went with the pattern instructions and cut facings. It worked well enough for the neck/back with careful understitching and tacking.


The arms were another story altogether. I ended up carefully removing the finished, understitched, pressed and tacked facings when they simply refused to behave - flipping out rather than staying to the inside. Instead, I finishing the armholes with a bit of twill tape from my stash with much better results, even though it means there is stitching visible on the outside of the garment. I think it looks fine.

The end results: I really dig this dress even though it is so outside of my norm. I particularly like it unbelted, which is a shock. A big thanks to Carolyn, who gifted the fabric and issued the challenge that I think outside my comfort zone. Also, thanks to Oona, whose colorific love of prints inspired the Oonapalloza sew along. Maybe some day I will be brave enough to mix my prints. For now, just sewing something that isn't solid seems like a baby step forward for me. 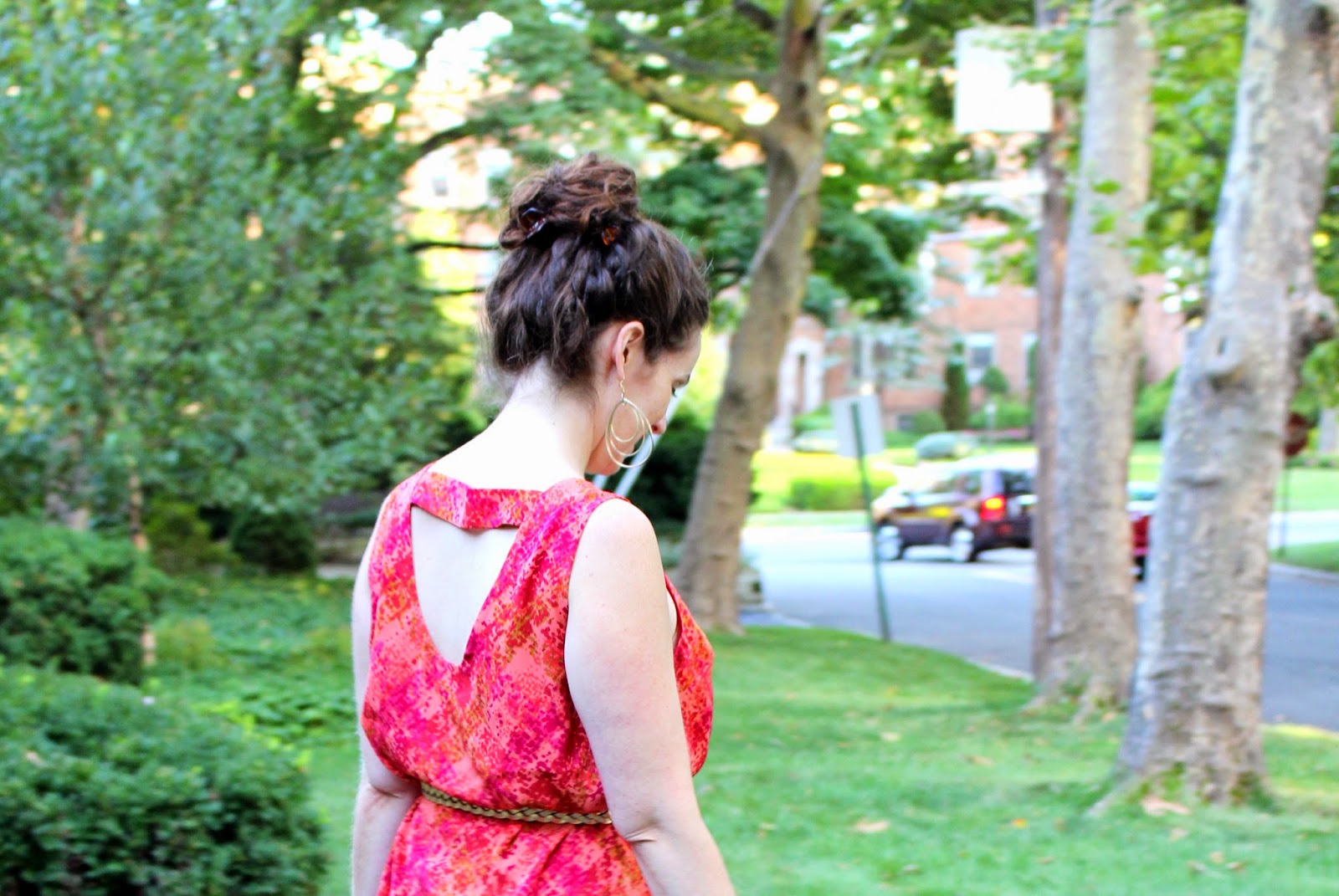 Camera Update: So, a few people have asked about progress with my new camera. Honestly, a new camera has not done anything to encourage Phin's, um,  photography enthusiasm levels or improve my modeling ability. There is a growing collection of blurry pictures that would have been great had they been in focus, along with a depressing number of pictures taken while I am trying get a pebble out of my shoe or straighten a necklace, or am in the middle of saying something and making a crazy face. In the interest of both my blog and letting Phin off the hook, I think I will start experimenting with my borrowed tripod and timer. Sigh.

"The longer I sew, the more I find that marrying fabric to pattern and choosing the right set of techniques to work with a fabric's natural properties, rather than fighting them, really is the key to success." - This is SO true. You can't fight your fabric or your pattern (though you can alter) so they have to work in tandem.


And I think this is very Oona! I've seen a lot of lovely items from this sew along (though, in truth, many of them don't have an Oona vibe other than that they're made in a zany fabric). This feels like more than a vague reference. The shape and style are very on point.

Well, definitely the going from a vague inspiration to three hours later having most of a dress is in the spirit of spontaneity that she brings to everything!


Yeah, I feel like I'm beginning to really grasp that a fabric tells you how it wants to be treated. And when you listen, it just comes together with little fuss. ;-)

Love this! The fabric is so fun - and it is totally perfect for the style you chose. I really like it with the belt, but I agree that you could totally wear it with or without. Very fun, especially for summer.

The dress is awesome! I'm so glad that you took both of those pieces of fabric! BTW, the pebble in the shoe picture is quite cute!

What a great dress! I LOVE these colors on you!

I really like this on you. I think it looks best unbelted - more dramatic!

the "pebble in your shoe" shot is SUPER CUTE!!! in fact it looks just like some goofy pose i'd try :))


what a beauty this dress is. and so beautifully made!

Great job! Love this on you.

I love this dress - the cutout in back is so fun and it looks perfect on you when it's belted! I do really love your pebble in your shoe pose, but I can't wait to hear about what you think of the tripod and timer. I've been thinking of getting one as well!

Ha - I'm not telling Phin otherwise he will think his picture taking skills are sufficient! Glad you like it!

Thanks! Orange is my happy color!

Thanks - yeah, I'm so surprised I like it unbelted.

um, yeah, that was my... um... intention all along with that "pose" (fingers crossed behind back)...

It's a great pattern! And one of those ones that doesn't always jump off the page at first glance. I'm glad I made it.

Thanks! I'll keep you informed of how it goes with a tripod. I'm hoping it will just make my photos a bit more consistent and I'll be able to figure out what is the best/most flattering camera height, etc etc.