I'm in the middle of sewing my Future Dress, since my additional fabric - a beautifully drapey rayon challis - arrived during the week. Given how light weight and potentially ravel-prone I thought it would be, I decided that french seams would be the best finish for the dress.


French seams are time consuming since you basically sew and press them twice. The slower and more carefully I sew and press, the better they come out. Oh. And did I mention that this dress has 12 very long seam? Yeah. My work was cut out for me, and there were a few set-backs. It was nearly impossible to figure out which was the right side of the fabric. Also, I sewed one or two seams together with the incorrect sides facing because "sew right sides together" is so ingrained (for french seams you start with wrong sides together.) I used my seam ripper a lot and I'm still not completely finished with the dress.

That said, despite the effort I didn't hesitate on the decision to use a complicated seam option, nor did I procrastinate working on it. I also didn't try to cut any corners no matter how frustrating my french seams became. This was not the case with the other seam I should be working on.

My other project is a baby blanket ('tis the season for baby gifts again). I finished the actual knitting several weeks ago. It's the Baby Tree of Life Blanket by Lion Brand Yarn. I just love classic heirloom style ecru baby blankets. 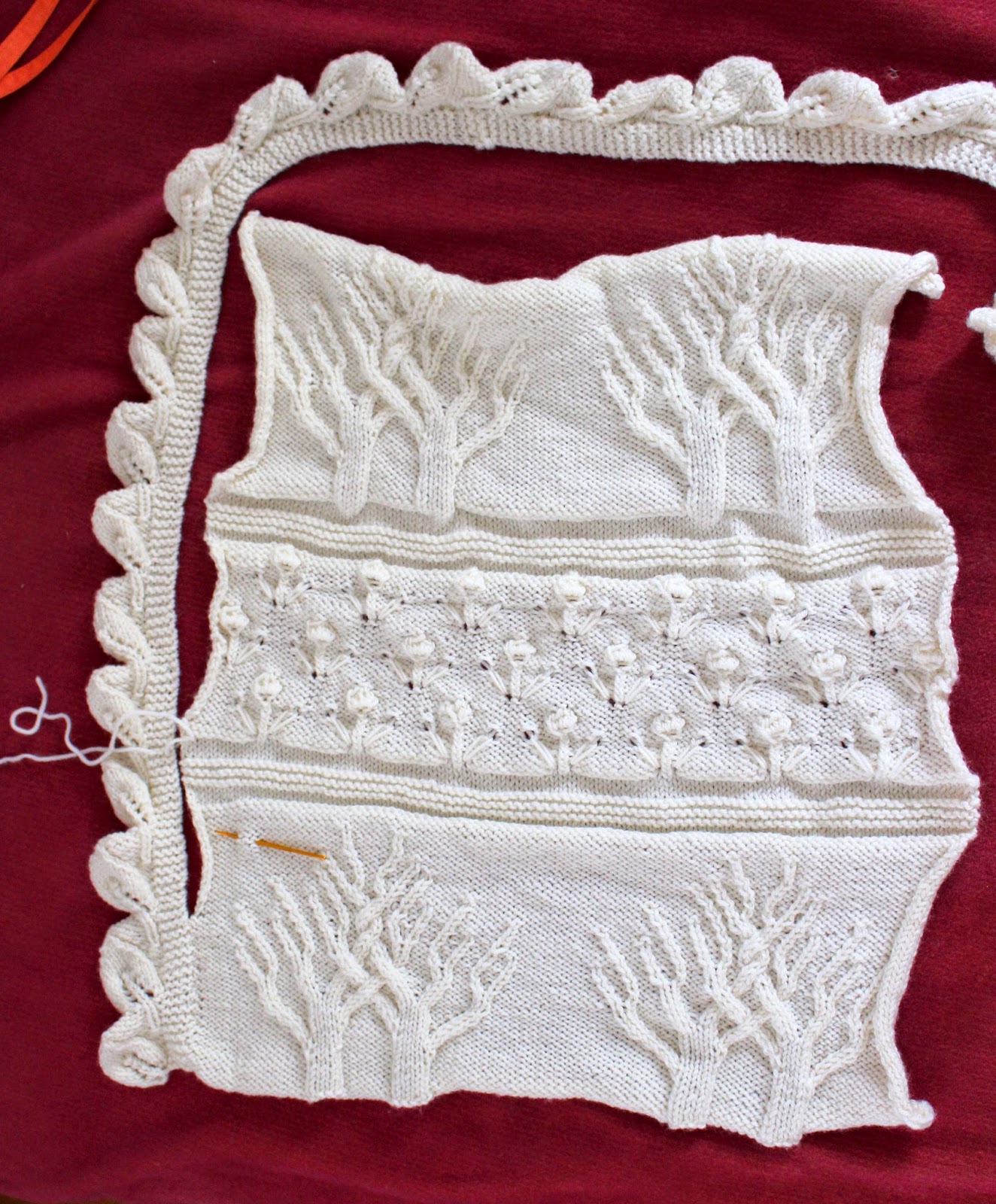 Anyway, the whole center area is knit separately from the leaf trim, as you can see. Then you seam the trim around the perimeter. The seaming doesn't require any fancy stitch or handy-work, and yet I spent the entire weekend procrastinating to a point where I only have about 4 inches done. 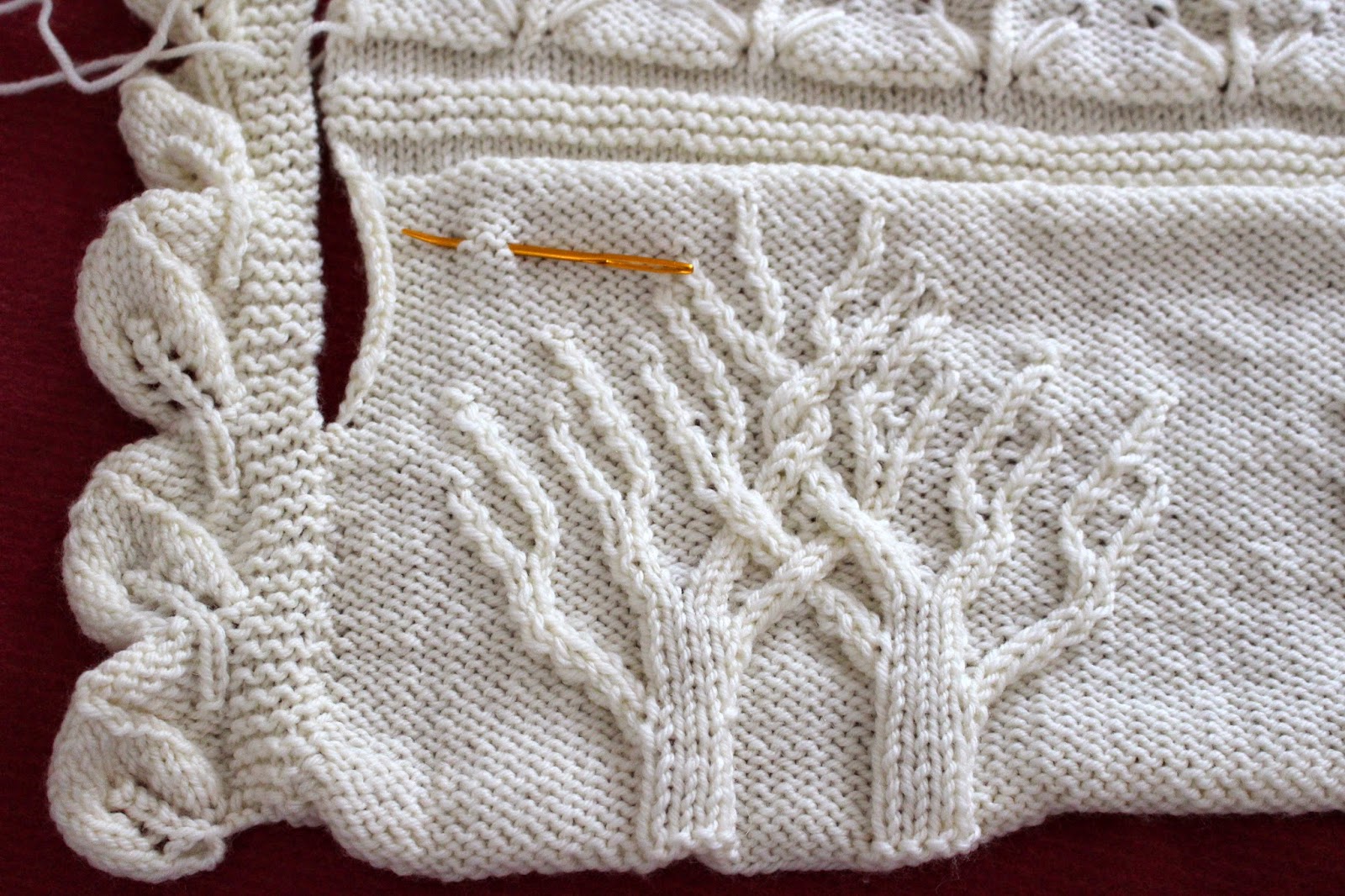 I'm feeling uncertain. For many knits, you should block before you seam.  But this pattern actually suggests seaming as you knit the trim (ie: pre-blocking).  I didn't do this. So, now I have 96 inches of trim to seam.

I have no explanation for my behavior; it makes no sense. I happily spend hours toiling at a complicated sewn seam, but can't seem to do a simple knitting seam, which I could even do while in front of the television. In fact, as I write this, I have the Harry Potter marathon on. I suspect that once I get going and feel like I've made progress, the blanket will speed along. But for now, I procrastinate. 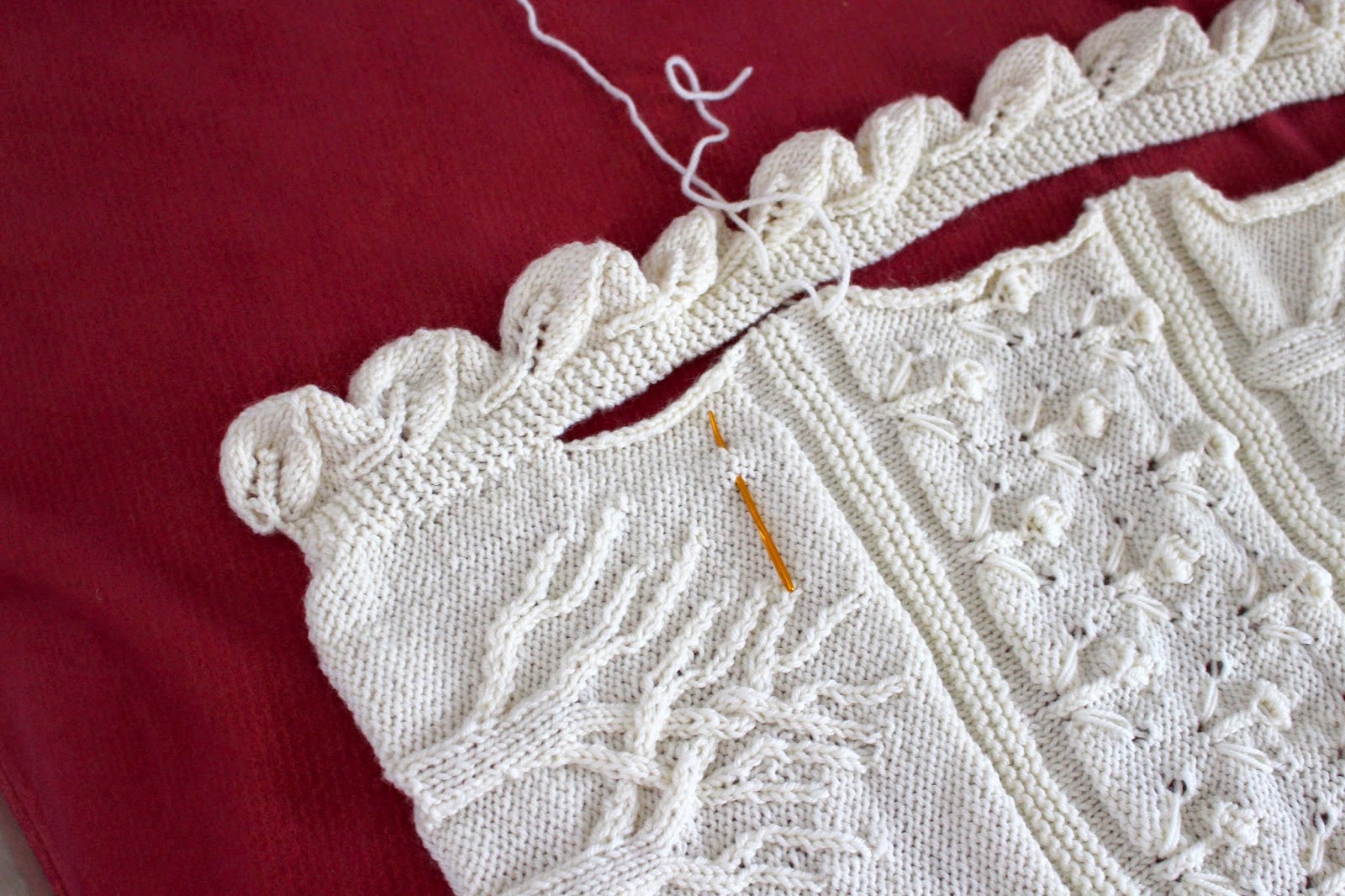 Do you have any strange and inexplicable crafting behaviors?
Posted by Clio at 3:48 PM

Labels: Hangin in the Craft Lounge, Purls of Wisdom

My god, there must have been a way to pick up the stitches for that border - it hurts me to look at it.

Ugh, I hate seaming my knits. It always looks terrible. I cannot WAIT to see that future dress in person, her photos make it look so elegant.

I know! If it had just been the sides, I would have knit it as one. But I couldn't figure out how to do the top and bottom. Sigh.

I'm really happy with how floaty my fabric is! Can't wait til this is done!

I love the colors you chose for your dress and I'm really looking forward to the final project. And yes seaming knits is always I procrastinate.

For me it it everything that has to be sewn by hand which is procrastinated. I hate hand sewing... Some things I sew on my machine are also procrastinated, but that is only when something went wrong (too small, too large, doesn't fit)!

That being said, I'm really looking forward to seeing the finished dress in blue!

The baby blanket is looking spectacular. Your dress in floaty fabric should be also.

For sewing I don't mind the hand sewing. Knitting is a different story!

What is it about seaming knits?

Seaming knits is frought with potential error - you can't see very well what you are doing, and if you make a mistake, it doesn't become obvious until you have moved on. That's why I hate seaming knits. I love to hand sew. I can see exactly what I am doing, and if I make a mistake, I can see it quickly and correct it. I love knitwear, but I hate seaming, even though it results in the best fit garments. This blanket is awesome, so seam it up!

All those seams! Going to be totally worth it. Love that color too!

French seams are a pain, but they are so worth it in the end!

I can't wait to see this dress on you. But now I'm wanting one of these... I'd forgotten how cool they are!

I totally know what you mean about being willing to spend ages doing something complicated, but taking forever to do something silly and easy. I've had a sweater that just needs a sleeve sitting for nearly two years and just can't motivate to finish it! Dumb.

I did make some progress before running out of thread. So, now I just need to finish the neck/arm holes and hem.


You would not even believe how much other knitting I've done while avoiding seaming. I don't know what's wrong with me. I'm even finding reasons to tape sewing patterns together every night in procrastination. And you know I hate taping! lol