Sock Reveal: Life Would Be Easier with a TARDIS of My Own

While I was on the road for work over the last 2+ months, I knit up a storm, including new socks for myself. Knitting really is a wonderfully transportable hobby, especially when it comes to small projects.

I didn't realize it at the time, but I think knitting these socks was really an exercise in wish fulfillment. Life would have been so much easier - and my sewing so much more productive! - if only I had my own TARDIS to traverse time and space.

Unfortunately, I had to settle for socks. However, these are pretty cool socks, especially if you are of a somewhat geeky persuasion.(And if you don't agree that Tom Baker was the best Doctor, well, you can just keep that comment to yourself.)

They are based on this popular sock pattern. However, I did a few things differently. First, I knit from the toe up instead of the top down. This allowed me to use the cast on, foot and heel that I like best. The only complication was that I had to flip the pattern for the colorwork parts, working it in reverse so the letters came out the right way. It was pretty easy to do. The only part that couldn't be flipped was the ankle (ie: between the heel and colorwork), which at least IMHO looks fine knit upside down (would you even know?). 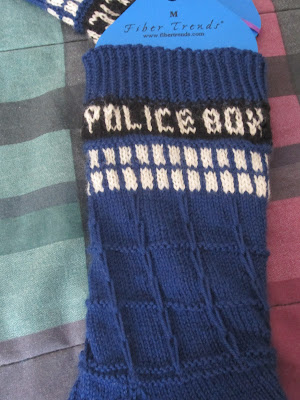 While knitting these socks, I realized that I'm not actually a slow knitter, as I previously thought. I just have a talent for picking complicated patterns that take precision and care. Not so with this quick and easy pattern. The only part that was challenging was the colorwork, which was a first for me. You see, if you don't knit the colorwork loosely, it won't stretch - a big problem for socks. I had to do and re-do all of the multi-colored parts a few times to get them right. Other than that, these socks were a breeze. 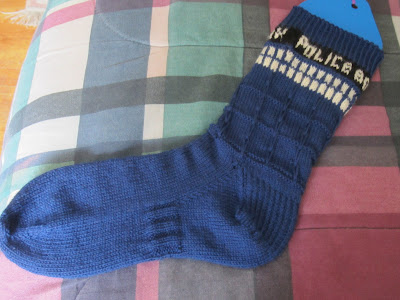 Next up in sock knitting is learning how to darn.

Yes, I have worn a hole in my gorgeous cashmere lace and cable socks after just four months of (pretty intense) wear. Sigh. I had been hoping that rumors that cashmere socks are less sturdy than wool/nylon ones were not true. Seems that they are.  Anyone have any tips for darning socks??
Posted by Clio at 12:54 PM

Tardis socks? I think I need to learn to knit just for this one!

Hey - I wrote a whole post on darning and mention the Socupied issue I bought online that has some great tips for fixing holes (easy way and gorgeous but hard way). I cannot believe you did those Tardis socks upside down!?!? How could your brain even manage that?? And I totally need a Tardis. Seriously.

Oh, I just KNEW you were going to beat me to finishing... I'm still on my second sock cuff (knitting top down).

LOL. This is a byproduct of you having a life and me having lots of hours in airports and on planes and trains...

AWESOME - I forgot you posed about darning. I will check it out.

Actually, don't be too impressed. Since I like knitting from a chart, and this was a chart, all I had to do was start at the opposite corner and go in the opposite direction and everything righted itself.

You do, Reethi! Knitting is fun and can be mindlessly productive when you don't have the energy for sewing.

Oh, Tom Baker as The Doctor! He was beautiful, he was hideous, he was magnificent. That hair, that manly stride, those expressive fingers ... that voice. OMG, that voice must have bedded hundreds ... but I am an old woman now, and this is sounding more and more creepy.


As to sock hole repair: I find that taking a doublepoint and picking up stitches just below the dratted hole, and using another doublepoint to knit a tiny patch, is far more effective (and easier to wear) than darning. You can either pick up and knit together a stitch from the still-good stitches on either side of the hole, at each row end; or go back after you've sewn down the top of the patch at the top of the hole, and sew down the sides, too. Weave in your yarn ends inside the sock as per usual. If you have some of the same yarn, use that. Or, be wild and crazily thrifty and use something that is not ashamed to declare itself an honest patch. I re-heel handknit socks like this all the time, as apparently my heels are skinned with sandpaper. A hole in the toe area is just about as easy to repair by cutting off the toe, picking up the good stitches, and re-knitting the entire toe as it is to make a darn. Unless the hole is tiny, in which case sew it up as best as you can. Or embroider a small motif over it. Knitter's choice!

wow. those sock are Fabulous with a capital F! I had my first knitting lesson today... and I'm again blown away by peeps like yourself who can create such wondrous things. Love those socks! And after making a pair of those... it must be so sad to see it with a hole :(

Soon you will, too!

LOL - And don't forget the scarf of epic length!

Luckily I have some left over yarn. It would be sad to have patchy cashmere socks. Apparently the balls of my feet are made of sandpaper.,

LOVE LOVE LOVE. These socks are just the best thing ever.