Or What to Do with Fabric that has Pedigree...

I mentioned a few weeks ago that I received a very wonderful gift of fabric from the incomparable Peter of Male Pattern Boldness. And this fabric came with definite pedigree, if a bit uncertain provenance.


Apparently, a few years ago Peter found four rolls of black fabric on the street in NY and kept three of them. Some became his very first project for his jet setting twin cousin, Cathy Lane - a little black dress which cemented her place as MPB muse and international woman of fashion. So, when Peter gave me two lengths of silk knit in two different weights from this very same fabric find, I knew I had to make them into something chic. After all, Cathy set the bar high with her LBD.

Cathy shines in retro styles, while my sensibility is more modern. But I knew that this dress had to live up to Cathy's high standards of taste. So, I picked Vogue 1342, a Donna Karan dress with crazy looking pattern pieces. I used the tissue weight silk for the drapey outer layer and the light weight for the lining.

There are no alteration lines on the pattern. So, I had to make an educated guess at where to alter so that I had a little extra room at the hips. There were a few moments that I feared the worst. Would the dress fit? Would it flatter? Or would it be a flop, like my Donna Karan thighs of doom skirt?


When I modeled the finished dress for Phin, he made the absolute perfect comment: Let's go on a date this week. Just so you understand the magnitude of that compliment, we've been married for 8 years.


Unfortunately, the only pictures that Phin snapped while on said date were of me shopping for gourmet treats in Eataly.


Anyway, I love how the dress came out and feel tres chic in it. There is just something about silk that feels so very nice on. 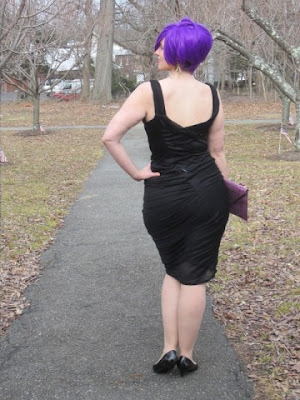 There are some real plusses to this pattern and it's design. One of the problems I had with my thighs of doom DK skirt was that with only one seam and no lining, the drapes collapsed and got droopy if you moved. Also, it was clingy.  But, very cleverly, this pattern has you sew all of the seams invisibly to the lining, so that all the gathers and draping stay where they are supposed to and you've got the smoothing powers of a lining to deal with any clingy problems.

The fabric was great to work with and I would suggest that anyone making this dress stick to a light weight knit for the outer pieces with something more substantial as lining. There's a lot of gathering involved in this pattern and really bulky seams are a risk if you use a heavier fabric. Because I didn't want to add any bulk whatsoever, I simply serged all the seams. As I mentioned when I posted about this crazy Donna Karan dress, there is a certain satisfaction in turning a bonkers looking pattern into a dress. I really enjoyed sewing this up, even if there were moments when I wasn't sure that it was going to work or fit. But it did. 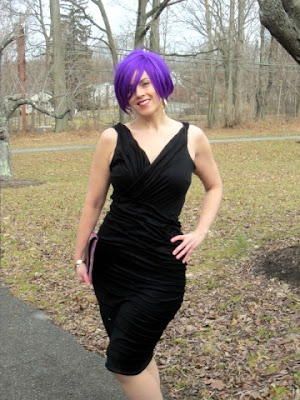 Chic? I think so. I hope Cathy approves!

Speaking of jet-setting, I'm currently in London for work. I'm meeting up with Rachel of House of Pinheiro on Saturday. Holler if you want in!

You're so rocking this dress! Go girl!

You look amazing! Curves in all the right places! How kind of Kathy to share fabric;-)

I think Cathy would definitely approve! You look fantastic in this dress, it is just stunning!

Oh yeah! Way to break the brain-tangler! And may it see many more date nights! -So is the lining an ungathered version of the same seams?

looking fab! cathy will be jealous, and peter will be happy the silk went to a worthy home :-)

Wow, va va voom! Love the dress. Your fabrication was spot on for this pattern. You look stunning.

Cathy approves and so do I! It's beautiful!

It's gorgeous! And a great idea to sew the skirt to the lining in strategic places. I wish DK had thought of that for other garments in the Vogue collection! Adate night is always a lovely wonderful thing, perhaps more so after 8 yrs together! (I get it - I've been with DH for 23 yrs and date nights are precious.)

So sexy! But girlfriend, it's cold out! Put a coat on!

Ungathered yes, but not the same seams. It looks like a normal sheath dress lining.

Yay! Thank you for the fabric, Peter!

It was actually flurry-ing when we were snapping these. It was COLD!!

Especially when motivated by him! ;-) Yeah, the sewing the seams to the lining really was what sold me on this pattern. It really makes a difference.

Ooooh - you look freakin' hot! The dress look fabulous, totally worthy of a date night. And it looks perfect with the purple hair. Awesome.

I think Cathy Lane would approve. I certainly do. Genius about sewing the gathers to the lining to hold it all in place. And London Town - you lucky thing you!!! Have fun with Rach :)

VaVaVoom... that dress looks fantastic on you... love the hair with it too.

Hahaha I love cousin Cathy but I love your make more. Very sexy and I'm really glad you broke out the purple bob for this-I love it on you. Also-you guys are so cute XD

The dress is awesome on you, and honestly, Cathy, despite her style mavin status, does not have the right shape for a dress like this, so you have gone one better with the fabric IMO! I cannot imagine a better use for a drapey silk knit.

Woah, how could anyone not approve of this dress, the dress is hot and you look spectacular! I hope Phin didn't just take you to a shop (albeit a delicious sounding one) for your date!!??

Ha! No, we were just passing through on our way between a pre-dinner drink and dinner.

Thanks everyone! You know, I felt very vavavoom in the dress and I guess that comes thru.

Na. Just a firm believer in the 'if you put your opinions online be prepared to have others disagree with them' philosophy.

Loooove this dress on you.

You can do it! It's a great pattern. Just take your time and baste.

hot damn, that's a sassy number! you look awesome and oh so stylish!