My Jean-ius trousers are done, done, done, but not photographed yet. So in the interim, here is the second episode of my apple adventure...

The weather in the NY area was SO gorgeous last weekend that on Sunday morning Phin and I added to my apple hoard. We picked 22lbs of apples. (What can I say? I get my money's worth out of my U-Pick season pass.) About half of the apples are for eating and the other half are for baking.

Once we were home, my head was in a cookbook. Since I wanted to use up lots of apples, a crumble* seemed like the way to go. I reached for my trusty KAF Bakers Companion and was off and running.

Thirty minutes later, crumble was in the oven... 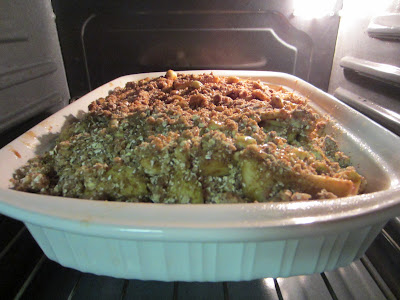 At this point there was a ninety minute interlude while the crumble baked and the house smelled so incredibly good that I was climbing the walls. After that... 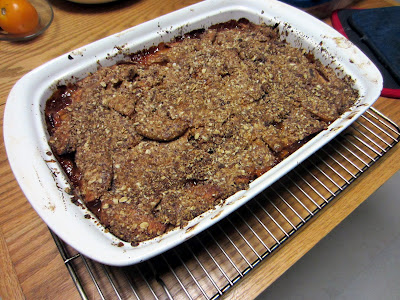 The crumble cooled, while I paced. Then it was time to eat...


A little vanilla ice cream over warm gooey crumble is a thing of beauty.

I've made loads of crumbles and crisps in the past, but I've never had a real go-to recipe. But both Phin and I were so amazed at how good this was that there really is no contest with past versions. The apples were tender, the sauce was a caramel gooey goodness, and the crumble topping was crisp and buttery.


A few notes:
* I've heard that the difference between a crisp and a crumble is that a crumble has oats in the streusel topping while a crisp does not. But I've seen crisp recipes with oats in it. So I think there is enough confusion that the two are pretty synonymous. I won't even get into varieties that have nuts in topping... or mention cobblers... or brown betties...
Posted by Clio at 10:19 AM