Boxer Shorts Sew Along with the Bold One

Well, I am continuing to take sewing at a very slow and unhurried pace since the red dress. No deadlines looming. No sense of urgency. No rush. If I feel like being in the Craft Lounge for an hour, I go. If not, I don't.

One fast and easy project that I've been lollygaging over is boxer shorts for Phineas. I decided to jump on the Men's Boxers Sew Along over at Male Pattern Boldness. This is a great sew along for anyone who needs a break from high-intensity sewing or a newer sewist who wants to learn some nicer finishes for their projects, like flat felled seams, bias bound edges and the very nice waistband/elastic treatment Peter uses. 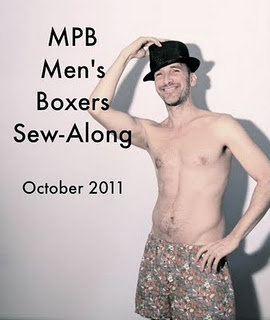 For Phin, I picked out three nice soft shirtings from Chic Fabrics on W39th Street in the Garment District. They were on sale for $5 a yard.

I used Simplicity 9958 since Phin wanted a pattern that had a back center seam. He has a rather flat bum, so the patterns that have no back seam leave a lot of extra fabric in the seat. There is just one pattern piece. Anyway, I stitched two boxers up in the last week (the other fabric isn't washed yet).

I made a few changes to the pattern after a very quick muslin. First, I made a fly facing just by tracing that part of the pattern. Next, the pattern runs very large, IMHO. I lopped 3 inches off the top to raise the crotch - it was waaaaay long. And I folded out 3 inches of width at the hip (so reducing 6 inches off the width of the whole thing).  This makes for a shorter, more close fitting boxer, which is how Phin likes it.

Taking a page from the sew along, I flat felled the seams, which is a very clean finish. And I used the nice waistband treatment that Peter describes, instead of making a casing and threading the elastic through. I recommend Peter's method - it's just as easy and much nicer looking. Because I had no side seam or side vent, I didn't use the bias finish. I just did a simple double turned hem.

And here they are. Two boxers for Phin, with a third to follow whenever the fabric is washed. He seemed pretty pleased with them, which is what counts. Now, if I could just remember my Flickr log in details, I could upload this to the Sew Along group. Sigh.
Posted by Clio at 4:56 PM

They came out great.