I posted my final thoughts on my Lady Grey adventure on Pattern Review the other day: click here for review

And now that I'm finally done, I've definitely been suffering from a case of the blahs. Somehow, getting back to work on my pants with welt pockets just doesn't seem terribly exciting. I just don't know what to do next. Honestly, between Monday and Wednesday, I seemed unable to focus on any hobbies. Runs were planned and then canceled, cookbooks were flipped through and cast aside, Burda arrived and was ignored. But then, there was a very little ray of light: before I went to London I had mailed my shears, which had been very very dull, back to Gingher for resharpening. They arrived back yesterday, all sharp and pretty. 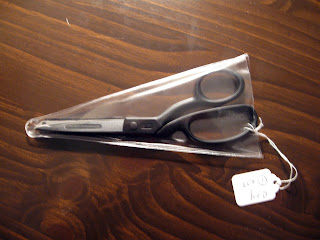 So, now I am eager to cut into some fabric. But what?  Then I saw that Faye has announced an "Over the Top Challenge" - sewing tops for the first 15 days of April as a blitz sew along. And Karin of Making the Seam just sewed up Burda 2/2011 102B, which I had also noticed when that terrific issue had arrived. So this is definitely a possibility.

Still a bit undecided on what next, last night I decided to flip through my patterns and get some inspiration and ideas. That is when I had a somewhat shocking revelation: I am a closet pattern hoarder. I never quite realized this because my fabric stash is so modest and judicious. And unlike my fabric, which is neat and organized, if you count 2 years of Burda magazines, I've got patterns stashed in four different places! Five if you count the stack of newest patterns that are on the nightstand as reading material! And I've got even more patterns in my shopping cart at several on-line pattern stores, just waiting for a sale.

So, project number one this weekend will be to de-clutter and organize what I already have before ordering a single other pattern. THEN I will hopefully have a plan for what to sew next.

Have a great weekend everyone!

I always think a pattern stash is much less of a problem than fabric. Patterns are cheap if you buy them in the 99 cent sales, and don't take up much room. I am going to give Faye's top sew along a go, too.

True! Inexpensive and easy to store, right? That's how my patterns got out of hand.

I had the same pattern epiphany recently. I am a pattern *collector*. I don't necessarily want to be, but at this point I have way more patterns than I could ever sew. I culled about 10 last night (including a duplicate--not the first), but considering I probably have over 300 that didn't make a dent.

*collector* - that's a much better word than hoarder! It has an air of connoisseurship to it.

Pattern hoarder/collector, join the club! I have pattern greed and know that I need intervention but I am not ready for it yet.

I've added you in on the Top Challenge so you will get an invite email momentarily. Just respond to it and the you are officially in. It's so nice have you be a part.