Jack, the Seam Ripper
On Saturday, I realized that I had spoken too soon when I said "all this purse needs is some insides". You probably thought that I meant that I would be done with the project soon. And to be honest, so did I. But we were both mislead.

It turns out that making the insides has been a real learning experience. And by "learning experience", I mean one in which I had to redo the whole thing twice, at one point chucking out what I was working on and starting from scratch, only to finish (for a 3rd time) and realize that the stupid f***ing thing was too short and too thick to fit into the outer shell of the purse! Efff!!! I had even added the pen holders and lipstick holders! Serenity now...serenity now.... serenity now...

After I ripped out about 2/3rds of the seams, I figured out how to fix it - I could remove the interfacing (so it would be thinner) and alter the pocket folds so the whole thing would be longer (and thus fit correctly). Here it is looking like a worthless scrap of brown fabric with smears of white chalk... (negative? who, me?) 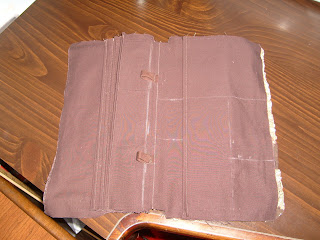 At least I didn't have to remove the lipstick holder loops.
I left the project there rather than try to sew while I was so irritated. At least I've figured out how to fix it. Sigh. There sure is a lot of un-sewing in sewing.
Posted by Clio at 2:56 PM