I had already been drafting this post when Seamstress Erin put out an open invitation to share experiences of sewing and motherhood in a series called "Ease into Motherhood." Becoming a parent is one of the most normal, yet profound, things that most of us will do at some point in our lives. But how do you ease into something that is like being hit by a 30 foot wall of water? A tsunami of normal. 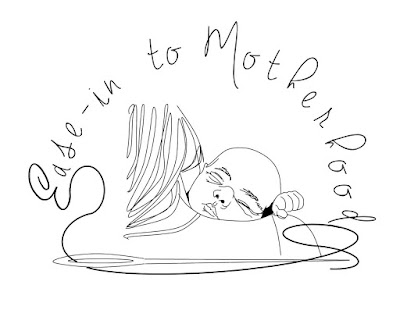 These days, when a woman has a child, everything she does gets the word "mom" added to it. Think "mom jeans," "mom (hair) do," "mom style" and the like. A woman with a child no longer meets friends for a drink; instead it's "momtinis." She can't have social plans sans child without it being "Mom's Day/Night Out." She can't disagree or do things her own way without it being "mommy wars" or being labeled as that type of mom (seriously, just google types of moms to see the degree of labeling.) Other people - coaches, teachers, anyone who interacts with her in her role as a parent - will even call her "Mom" rather than bothering to learn her name.

I used to be called Clio.


Is it any wonder that many new mothers suffer from a loss of identity? 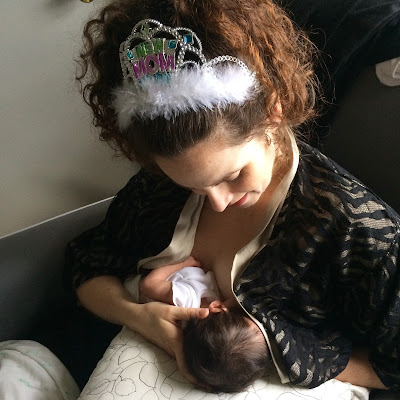 What's in a name? We're sold this bill of goods that says we should be MOM before anything else. In our pasts, we may have had hobbies and activities, pursued goals and aspirations, and led rich and interesting lives. But once we are mom, we are supposed to be happy and grateful for our selves to be subsumed by motherhood, everything else about us a distant second. I'm a mom first - the mantra of mothers who work - silently adds lest you think I don't truly and deeply love my child because I need things in my life outside of motherhood.  It's not healthy to see ourselves as one dimensional.

Mom is also a name that has a strong attachment to gender norms. So is Dad. And it starts early. From the moment I was pregnant, people in our lives assumed that it was me who wanted to have a child and Phin was along for the ride. Phin even had other men commiserate with him that now he would have to help out at home. Phin and I already had a marriage in which I commuted and went on business trips while he worked from home, which meant he had more time to cook meals, shop and run errands. We eat really well, btw.

The Tsunami. Pregnancy was one of the happiest and healthiest periods of my life. I loved being pregnant. And Taco was an easy newborn. Knowing it would be a tsunami, I gave myself a lot of room to recover and adjust to caring for him, while Phin, who gave himself a generous paternity leave (perks of being your own boss), cared for me. Our home was full of love. It was the second three months that were a struggle. I was ready to get back to doing the things I loved doing, and I was tired of being at home all the time. That's when sleep became a challenge and Taco became more demanding - he was desperate to sit and later stand, but hated the bouncy chair, the swing, or anything other than my lap or arms. I felt like I was drowning; constantly busy yet accomplishing nothing.


It was such a relief when Taco was big enough for the jumparoo, which he was happy to go in at least for a few minutes at a time.

To this day, Taco's motor skills are well above average and his sleep needs are at the low end of normal for his age group. (Read: he's incredibly active and doesn't sleep much.) It was exhausting. Still is. To boot, as we ventured out more as winter was ending and Taco was older, the assumptions and associations of being a mom felt awkward and uncomfortable to me and simply didn't jive with my self image.

I'll never sew again. Sewing, in my mind, was THE THING that could help me feel like me again - a changed me, to be sure - but me at heart. Around this time, another mom in the otherwise wonderful support group I joined at a local lactation center was unsympathetic when I expressed my frustrations. She told me that she used to sew, too, before her first child was born four years prior. Her meaning was clear - sewing is not something that moms have time for and I should get used to it. Get used to giving up my things... my me. I remember emailing a few sewing friends to say "OMG I have a mom-nemesis who says I will never have time for sewing again!"

I later learned that my nemesis was suffering deeply from postpartum depression. My heart softened toward her; I wondered how many other pieces of herself she had given up. But the encounter also convinced me that I needed to prioritize the things that make me feel like me. Sewing. Baking. Knitting. Even work. When I announced on this blog that I was pregnant, I had said "We've built such a wonderful life together and feel like we have so much to give to a child." For that to remain true, I needed to be true to myself and not give up those things that most define me.

Getting back to sewing helped me feel like my days were not just a blur of nursing, napping and trying to amuse and help my tiny child grow up. Baking, too. In the beginning it was slow going. I remember telling my moms group it took me three days to bake anything: one day to take out the ingredients, one to bake, one to clean up. Sometimes it took 4 days. Sometimes it took weeks to sew something - one seam at a time, one task at a time. But I was sewing. And life got easier when Taco started taking fewer but longer naps.

I cannot overstate how important finding a new mom's group run by a social worker was to my experience of new motherhood. It was not a group to talk about parenting tips or our babies; it was a place to talk about ourselves and how we were doing, without judgement. Being told that it was ok to feel how I actually felt and be who I am as opposed to some notion of how mothers are supposed to feel and supposed to be was powerfully validating. I don't have to conform to gender normative ideas about motherhood to be a great mom to Taco. Most of all, the group taught me that my child deserves a mother who is a whole, multi-faceted person and that I don't need to justify or explain or feel guilt for my life outside of motherhood or the times that I need to step away to care for my own needs.

And so I decided to just be me and chart my own course through motherhood. Being a mom has changed me, but it is not the sum total of me. And while I don't have all the answers, being me means:

I like my career.  I didn't feel conflicted when I went back to work when Taco was 6 1/2 months, and I don't feel constantly torn between work and home. Part of this, to be sure, is that I have an incredibly family friendly employer that allows for a great work-life balance; I work a 4-day week - 3 in office, 1 at home. Plus, the commute that used to be a drudge is now time for me to knit. It's the perfect transition between work and home. When I get home I'm ready to give Taco my full attention until bedtime.

When Taco naps, I sew.  I do not pick up a toy, clean a thing, shop online, go on FB or do anything else mundane or that is a time trap during naptime. On the days that I am home, that is my time for me and I keep it like an appointment. Having that reliable, but limited, block of time has made me such a better planner and a more productive sewist. My sewing has also changed. I'm a much less selfish sewist. I sew more for Phin and Taco than I ever thought I would and for the first time I've sewn things for work. I focus more now on developing and then using TNT patterns, which helps me be more productive and have more wins.  Also, sewing connects me with friends and gives me something to talk about besides Taco.

I'm messy and I don't care. Truly. Taco and I bake together. I have just taught him how to crack an egg (he still needs coaching) and it is our favorite thing ever. I also let him play with flour, cupcake liners and non-sharp baking utensils. I am convinced that involving him in the kitchen now is going to pay big dividends someday - already he is generally happy when I ask him if we should bake together and will go to the pantry and start pulling out ingredients whether they are needed or not. If this becomes a shared hobby, so much the better. But in the meantime, I get to bake.

I wear white. These are my new white trousers sewn with my TNT trouser pattern. Ta-da!! I love them and wear them all the time, which is why they are so wrinkled in these pics. I was sewing these trousers at the same time I was admiring a white sweater knit by another sewist/knitter. There was a comment about her clearly not being a mom. Apparently, moms don't wear white. Something about messes.

I refuse to dress like a mom, whatever that means. I wear silk, I wear white, I wear leather. I wear what I want. If it gets ruined, c'est la vie. I enjoyed wearing it and can sew another. Why limit myself. 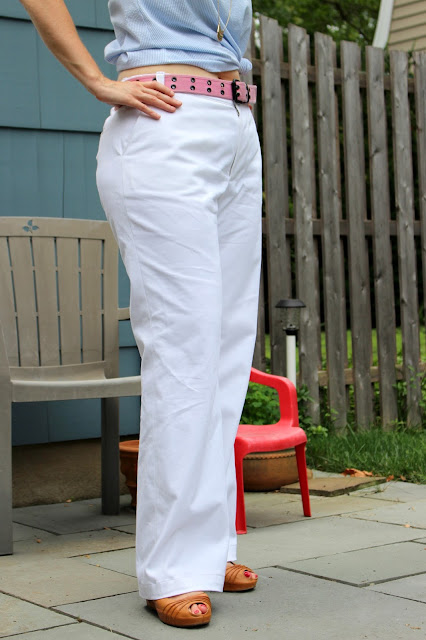 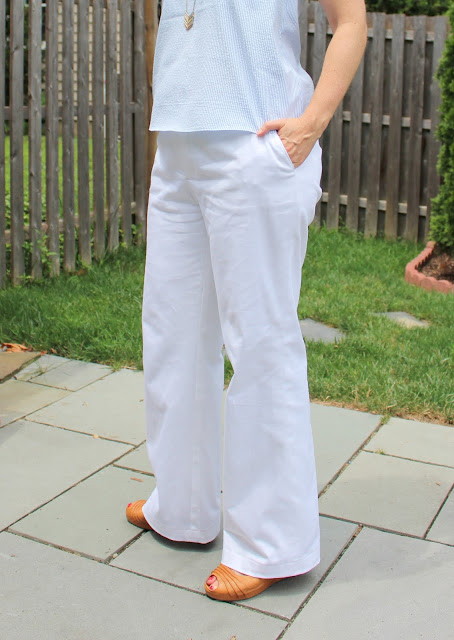 I prefer being called a parent. This post aside, I generally don't refer to myself as a mom or working mom or talk about motherhood. I prefer parent. It is a more equal word than mom and not loaded with gendered ideas or norms. And to be clear, I could not do any of the above without having an equal partner in Phineas. 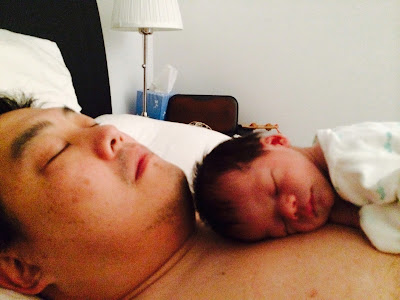 When I went back to work, he rearranged and scaled back his work to be at home with Taco on the days I'm not. Doing all the childcare ourselves, while both having careers, has been a huge commitment. Parents. The two of us working together as equals. And the best advice I can give about getting thru early childhood with a partner is to forget about keeping score of who is working harder, doing more or getting less sleep, and instead focus on sharing what little free time there is as equally as possible. That is really what fights about who is doing what and whose life is harder are about - the stress caused by lack of free time to pursue an interest, exercise, see friends or just be quiet. Making sure we both get what we need in terms of caring for our selves enables us to be whole people for Taco.

Labels: Hangin in the Craft Lounge, Muses, The Rock I Live Under, TNT