Look! I Made Duck Boots

Did you know such a thing was possible?

With the magic of knitting, it is! Here is my version.

I suppose it would be more accurate to say I made Duck Booties and not Boots. I think they are fun and cute. Originally, I knit them for Taco. But my tiny baby actually has rather big, wide feet. So, they have been sent to his younger cousin.

The pattern was pretty easy to follow even though it wasn't entirely intuitive. The only change I made was to make a three stitch I-cord for the laces instead of just using a piece of yarn, as the instructions direct. 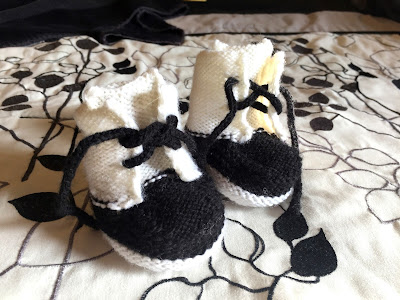 I didn't feel like buying new yarn in the more traditional duck boot colors. Instead, my version is knit up in Cascade 220 Sport which I had on hand. I've had some difficulties with this yarn. I initially bought it to knit a baby blanket for Taco. But I just didn't like how it was knitting up. It was not as dense as I would like despite being on gauge. Every time I switched colors it looked sloppy and obvious. So I frogged it.


Then I tried to use this yarn for a now-in-hibernation sweater for Taco. It looked cute but the gauge was WAY off.

Now that I've accepted that my gauge is so off that I'm going to have to start over if I want this sweater to fit Taco, should I do that or just knit some socks for myself? What do you think? #knittingwithbaby #knittersofinstagram #knittingonmycommute #babytaco
A photo posted by Clio (@cliophineas) on Jan 11, 2016 at 3:03pm PST


I know what you are thinking: didn't you knit a gauge swatch?  No, I didn't. For the first two years that I was knitting, I did a gauge swatch for each project and all it told me was that my gauge was scarily spot on. Hence, for the last two years I haven't. And this is the first yarn that has thrown me. Too late I realized that the suggested needle size for the pattern was different than what was suggested on the yarn for the exact same gauge. I suppose I should have gone with what was on the yarn. 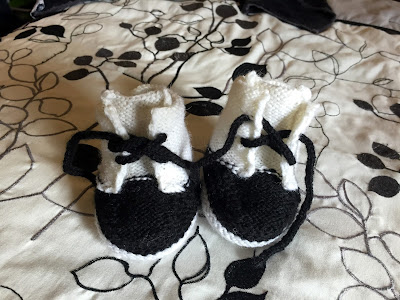 The booties, too, were knit on a smaller needle than the yarn suggested, which is probably the reason they are small. I may try to knit them again in a larger size so that Taco can have a pair, too. I have plenty of left over yarn since I bought a blanket-size quantity!  And the booties are insanely sweet, aren't they?
Posted by Clio at 8:30 AM