This morning it feels like Autumn has arrived in the NY area. So, posting a recipe involving pumpkin seems apropos.

If you don't know it by now, for the last decade cupcakes have been a big deal in NY.  But in the last two years, there have been predictions that pies will be the new cupcakes. But I say, why choose when you can have the best of both in one dessert?

Dessert is taken seriously in the Muse family. So, for my birthday, there were two cakes. One was chocolate (previously blogged here and frosting here) because it wouldn't feel like my birthday without chocolate cake. The other was Pumpkin Pie Cupcakes. Mmmm... I love Autumn and all the flavors that go with it.

Pies are a lot of work, but these cupcakes were a breeze with help from my 10yo nephew, Orpheus. The recipe is simple but interesting; it's basically a pumpkin version of a molten chocolate cake. Essentially, all you do is make pumpkin pie filling and add just a bit of flour and leavening.

As the cupcakes bake (for a mere 20 minutes!), they set around the edges like a cake, but stay custard-y in the center, like pumpkin pie. It's the very best of both worlds.

Once cooled, we piped a little bit of stabilized whipped cream with some cinnamon mixed into it onto the cupcakes. (To stabilize whipped cream just add a little cream of tartar to your heavy cream as you beat it with sugar and vanilla.)

We under-filled our cupcake tins to make 16 instead of 12 cupcakes, so they are on the small side. But that's fine. In the future, I'll make them normal size. Oh, and yes, these will be made again. I have any number of friends and family members who lament that pumpkin pie comes but once a year.

A few last thoughts on my birthday party and family...

I love being an Aunt.  And I had two really big reminders of why over the weekend. First, my 7yo nephew Linus made me a birthday gift. When his mom asked what he wanted to give me, he told her that he wanted to make me a necklace, because "Aunt Clio is good at making things".

Look what an awesome job he did! And I could see how very proud of his gift he was, which made it all the more wonderful.

And then my 10yo nephew, Orpheus, and I baked our awesome cupcakes together, and he gave me a subscription to a baking magazine and made me promise that we would bake together from it. 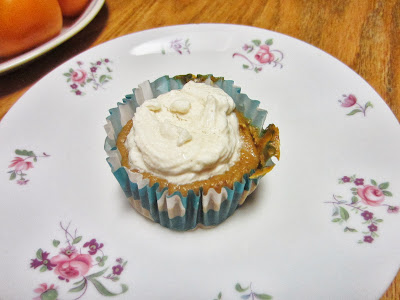 Being "good at making things" is important to me. If you read this blog, you too! In addition to the hours I spend each week actually sewing, knitting and baking, I also devote time to learning more about these pursuits. So, realizing that I actually have been passing that love of creating along to my nephews made me feel tremendously happy on my birthday.

Are you passing your love of creating along to others?  Do tell.

Those cupcakes look amazing! I am going to have to figure out how to adapt this to a wheat-free version because I love pumpkin pie, but I can't quite follow the recipe because I cannot have the wheat flour. It makes baking more interesting, for sure. I have this amazing vanilla cupcake recipe that I found (http://comfybelly.com/2011/06/very-vanilla-cupcakes-using-coconut-flour/), so I am wondering if I can maybe make a cupcake recipe mashup to make something edible for me, but similar to what you made? I shall have to ponder this... It's going to be like a frankenpattern, but for food.

Also, it is wonderful that you are inspiring others to try out crafty hobbies and learn how to make things. It is always good to see these things passed down to the next generation. I try to inspire others to craft, but usually it comes back as, hey you know how you can do this thing? Why don't you do it for me? It is nice to see that you are a bit more successful in spreading the fun than I am.

There isn't all that much flour in the recipe - just enough to make the batter firm enough to set around the edges without ruining the custardy-ness of it. It's pretty likely that you could substitute one of the alternative "flours" pretty easily. Do you have a brownie recipe that you like? Since brownies have little flour compared to other ingredients (like these) whatever you would use in a brownie recipe might work out well.

I think my success has everything to do with them being kids. You are SOOO right about adults wanting you to do it for them. But kids want to do things themselves - breaking eggs is fun; playing with beads is fun. Where, as adults, do most of us lose this along the way? Arts and crafts time is important and fun.

I have to make these-thank for sharing the recipe. Both my kids like to make things because I was always sewing and cooking and involving them in the proceedings. Now they cook for me! Happy Birthday

Now that's some clever thinking! Get them hooked young and reap the rewards later!

I make pumpkin pie without the pie. Make your normal pie filling, and bake it in a water bath in individual ramekins. Perfect if you can't eat gluten or if you suck at pastry like I do.


Like you, being good at making things matters to me. When I was in my 20's, a friend's mom could seemingly make anything. I remember being so impressed and I wanted to be just like her. Now, I can make anything. When any of my friend's kids need to make something for school or need a costume or whatever, I get the call. From screen printed t-shirts to princess Halloween costumes, to beaded necklaces. I love it. It is very satisfying.

Aw, you are so lucky to have such sweet nephews (and I LOVE their names). And they clearly have an awesome aunt :)

This is SUCH a nice story. You have had a positive impact on the young ones in your life, and you should be proud. Children want to emulate people they admire, so good for you, Auntie! The recipe sounds divine, but that macaroni necklace is something! How on earth did he make it? I make pumpkin pie filling in individual ramekins, but I don't even put it in a water bath. It always comes out great, and it makes a very good breakfast.

They are awesome little people! But those are the names I would give them (noms de blog) and not their actual names.

Isn't it Thanksgiving in your neck of the woods on Monday? Perfect excuse, no? Or is eating pumpkin pie on Turkey Day an American thing?

That's the same kind of woman I always admired too - thoroughly capable, creative and fun. It is satisfying to be the go-to Auntie.

So, bread yes and pastry no. (BTW - My first loaf of crusty bread came out very dense - it was a crazy humid day - so I made it into croutons. Am going to try again soon.) Yeah, I know several people who leave the crust behind when they eat pumpkin pie.

Oh no, it's totally cdn too. But I'm not in a celebratory mood right now so we're down playing the hol this year. That means no additional guests. Of course, my husband still bought an 8 pound capon?!

Well, it's not actually macaroni (I meant that this is the modern equivalent - in the hand-made-by-a-kid way. Do they even make macaroni necklaces anymore? Now I'm curious.). My sister (his mom) helped him pick out beads (all blue) - he strung them according to his own design and she helped him finish the ends with some findings. Pretty impressive for 7!

Pumpkin pie for breakfast? Clearly you are a woman after my own heart! ;-)

That is so sweet! I love that you've shared your love of making things with these little dudes! They obviously love you lots. :) I hope that I'm able to share that with my nephew, too. :)

Well, I am a dummy, I should have known that it wasn't macaroni! DUH. Oh yes, pumpkin pie filling is pretty healthy, seriously. Pumpkin is a super food, the pie filling is low in sugar, high in fiber. It's all good, including the taste!