We Interrupt Your Regularly Scheduled Programming...

Sciatica refers to pain that radiates along the path of the sciatic nerve and its branches — from your back down your buttock and leg... The pain can vary widely, from a mild ache to a sharp, burning sensation or excruciating discomfort. Sometimes it may feel like a jolt or electric shock. It may be worse when you cough or sneeze, and prolonged sitting can aggravate symptoms.  - Mayo Clinic

It seems I've got the burning, excruciating pain variety of sciatica happening at the moment. And sitting at my sewing machine has just not been a possibility. But thanks to the miracle of narcotics, tonight I'm actually sitting without feeling like my left side is on fire for the first time in days. But still, I'm thinking that I should probably not try sewing my leather jacket while on an opioid, even though the pieces are all cut. I think there was some kind of warning on the prescription about operating machinery or writing blog posts while under the influence or something... maybe I'll just go pet my leather some more.

In the interim, here's a groovy sewing tip for you. Someone at PR Weekend was asking how others get patterns back in the envelope neatly after they've been opened and pressed and cut. I don't know about anyone else, but here's my boot-leg method. First, I completely ignore the factory folds and just fold the pieces to envelope size. 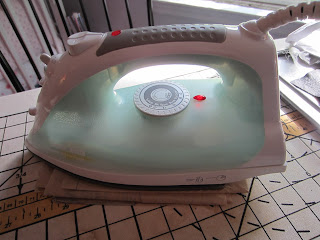 Then, the next time I press anything, when I unplug the iron, I just plop it on top of the pattern pieces in one stack and I leave it for, oh, maybe 30 seconds or so. Or I do it when the iron is warming up. As long as the house doesn't catch on fire, it's all good as far as I'm concerned. 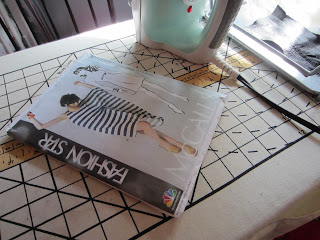 That smooshes the stack flat so it goes right back in the envelope with no problem. Is that what you do, too?

Anyway, we'll be back to our regularly scheduled programming just as soon as my sciatic nerve has learned to chill.
Posted by Clio at 10:40 PM

Labels: Domestic Goddess Toolbox, The Rock I Live Under

Girl!!! You don't have to define sciatica to me - I know about it first hand. My answer was chiropractics. Helped me out so much! Great tip also!

Oh wow! As someone who has spent the better part of the last 13 years landing on their tailbone, I am no stranger to back pains, but I don't think anything I have had is anywhere close to sciatica. I hope you are feeling better soon!

I haven't had a recurrence of sciatica for decades, since I learned to stretch my piriformis muscles.. http://en.wikipedia.org/wiki/Piriformis_syndrome here are some easy ones http://sportsmedicine.about.com/od/flexibilityandstretching/qt/Piriformis_str.htm but in yoga it's basically pigeon pose..
Hang in there! Narcotics are an exceedingly bad solution..

Ouch! My husband has this problem from time to time. The physio tells him that his hamstrings are too tight. It seems to be high strength IBprofin and massages from me that help. Glad you are starting to feel better.

So sorry! I had a bad flareup last summer, went to physical therapy where they showed me a series of stretches/exercises. It works you have to be good about keeping up with them. I really recommend a visit to a PT!

Yes, get help! I found a great physiotherapist, and as long as I do my stretches diligently I'm good.

Feel better soon. Thanks for the tip on patterns.

'Maybe I'll just go pet my leather some more' LOL! that is a perfectly safe and appropriate thing to do on narcotics. Sorry to hear you're in pain! Often I resort to plastic zip-lock baggies for storage so I can easily get at the pattern pieces and still see the envelope pic- plus I don't have to fold the pieces so small. Best of luck!

Thanks for all your concern. Truly. Yes, PT is a part of the treatment plan. Pain relief is to allow me to sleep, while the plan is given a chance to work.

I have never had it as bad as you are right now (thank goodness), but I think the worst part of it is feeling 150 years old when I have to tell someone I have sciatica. 8-D

I hope you feel better soon.