Sorry for the radio silence while I was in San Francisco! Even though I wasn't blogging, sewing was on my mind from the moment I got of the airplane at San Francisco International Airport. In just a few steps, I found myself face to face with a vintage Singer sewing machine! 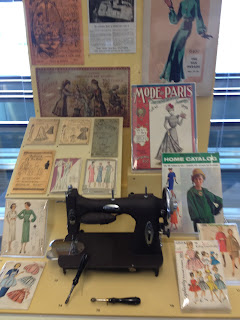 The museum at the airport has mounted an exhibit called Threading the Needle: Sewing in the Machine Age. It's got any number of beautiful early sewing machines, notions, advertisements, 1/4 size dress forms and a beautiful example of a dress sewn with some of the earliest home sewing machines.


By the time I made it to baggage claim, I was already in a fabric frame of mind.

My first fabric opportunity cropped up pretty quickly when I realized that Britex was just blocks from my hotel. So within minutes of checking in, I was browsing it's very well organized 4 floors - sumptuous wool and silk on 1; exquisite cotton, poly and rayon on 2; just about every kind of notion you can imagine, plus trims, patterns and some sewing books on 3; and faux fur, vinly, and sale on 4.  I really thought I'd hit the jackpot with the sale section until I realized that the 1 yard remnant of (the most gorgeous and buttery soft) silk that I immediately picked up cost $99. On clearance. Yeah, talk about a downer.


Overall, there was little to buy that was less than $20/yd, and most was more than that. Now don't get me wrong, all of the fabrics were luscious. But just not in my price range. At one point, I flirted with some orange wool/viscose/poly that was in a small area of 50% off wools, but decided that for $12.50, I could find something I was happier with at home. Some have compared Britex to Mood, but I think it's much more like Rosen & Chaddick or NY Elegant Fabrics - it's where you go when working on something special and cost is not an obstacle. This is not the kind of place that I would buy basics at or really buy anything at all at unless I knew what I was sewing and what yardage I needed. So, I left empty handed. Oh well!

My second fabric shopping adventure happened on my last day in town after my business was concluded. I headed out toward Golden Gate Park to hit two fabric stores and then drop in on the de Young Museum.

First, I stopped by Satin Moon. It's a small shop, but with very high quality fabrics. Again, there's not too much at less than $20/yd. But if you are interested in beautiful fabric and open to what may suggest itself, this is a great place to shop. They have a well curated selection of beauties at the ready. While I was there a decorator was buying home dec fabric for upholstering a couch for a client and another sewist bought some Ponte Roma knit (which was $18/yard, I think). But after some browsing, I moved on.

My second stop was down the street to Fabrix. This was more my speed. Fabrix is stocked with yards of discount fabric, including a whole table of $.99/yd bolts. A few weeks ago, Mikhaela over at Polka Dot Overload posted a few times about sewing with cheap fabric, and I'm pleased to say I have truly jumped on the cheapo bandwagon with this white burnout which feels very soft (like rayon, but I could be wrong).

The final tease with San Francisco was the de Young Museum which was opening an exhibit, The Fashion World of Jean Paul Gaultier: From Sidewalk to Catwalk just 2 days after I left! How unfair is that!?!?!? Doesn't it look phenominal? Oh well.

Anyway, at this point my time in SF was at an end. But it was fun to indulge in some fabric pawing in a new city. This week it is Montreal for me and hopefully more fabric pawing. Also, I've got some updates on my leather jacket project to post later this week - there's been some setbacks which just adds to the adventure. Stay tuned.
Posted by Clio at 1:16 PM

Cool! I am glad you had a fun time in SF - the airport exhibits look interesting. Yeah Britex and Satin Moon are definitely high end price-range wise, but it is still fun to look because they have so many good quality things. Fabrix is probably my favorite SF store because they have cheap stuff but you can find some things of good quality. I totally annoy my family because every time we go up there I have to drag them to all of these fabric stores, but oh well! If they want me to hem their pants they have to indulge my fabric needs.

Looking forward to hearing about your jacket adventures, and can't wait to see what you do on your trip to Montreal!

The museum exhibit in the airport sounds great. All I can say is Wowzer over the sale section with 1/yd at $99.00. Fun part of visiting another city is bringing home souvenier fabric.

When I was in San Francisco I went to all the stores you mentioned. Had the same reaction but lost my mind at Fabrix. I had to sit on my suitcase to close it to get home all the goodies I bought there...and quite a few of them still abide in my fabric collection. *LOL* Glad you had a good time and even brought home a great souvenir!

oh how fun! I am actually going to San Francisco in a few weeks myself, I will totally check out Fabrix! And Scrap, too: http://www.scrap-sf.org/... I saw Debi mention it on My Happy Sewing Place.

YES. COME TO THE DARK SIDE.

(but please not on that leather jacket.)

@ Oona - Ha ha ha - this will be all I can afford after the leather.

How cool to sneak in some sewing-adjacent activities while on travel! I'm with you on the high end stores, they just don't hold much appeal for me. Awesome exhibit at SFO!

Fabrix and I go waaaay back! They used to have several shops around the area. Now just one, but it's a fave. Hello! 99 cents fabric means you can give just about any idea a try.