It hasn't been a good week. A cold, combined with a heavy schedule at work and the departure of my assistant, have kept me out of the craft lounge, the kitchen and the yoga studio. But I did have some time to think about the great question of Life, the Universe, and Everything. So I'll end the week with this thought... 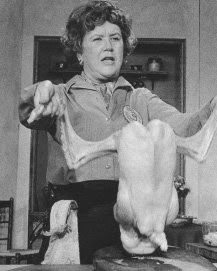 Julia Child didn't become interested in cooking until her mid-30's. She moved to Paris because of her husband's job and ultimately enrolled in Le Cordon Bleu, the famous French Culinary Institute. It wasn't until 1961, when she was almost 50, that her seminal cookbook, Mastering the Art of French Cooking, was published.

I find this inspiring. To me, it says that its never too late for a new hobby or passion; its never too late to challenge myself with something brand new and even excel at it. And also, it says that I can change my mind midstream and explore other sides of myself - sides I may not have discovered yet. And that is a refreshing thought for the weekend!
Posted by Clio at 9:40 AM 1 comment: Links to this post 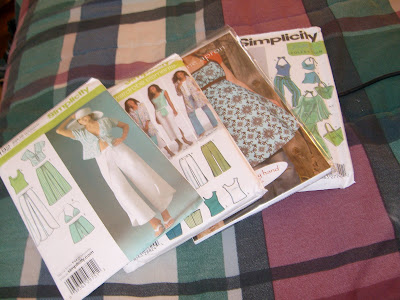 Last week I ordered a bunch of patterns to prevent any lapses in my sewing hobby when I am in between projects. I was thrilled when they all arrived on the same day. Some I have definite plans for and others are just to have on hand. Now I just have to start building up my stash of fun fabrics.
Posted by Clio at 11:48 AM No comments: Links to this post

Dark Side of the Moon

I hope you were outside or near a window, and looking up last night. From where Phineas and I watched the eclipse, the sky was clear and the moon turned a vivid orange during the totality (that is when the moon is fully in the earth's shadow). Saturn and Regulus were visible.

Standing outside, I experienced one of those moments when your other senses silence themselves and all your awareness focuses on one thing. Your thoughts and memories become quiet, and the world is still. Beautiful. Calm. Serene.

Sadly, there won't be another total lunar eclipse until 21 December 2o1o.
Posted by Clio at 1:50 PM No comments: Links to this post

The zipper is in! Woo hoo hoo! (Does victory dance.) 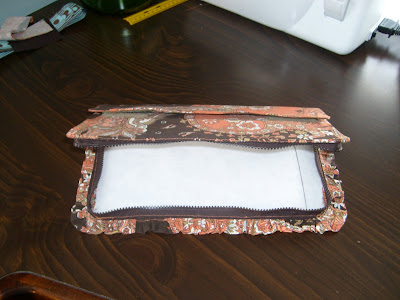 And it was Calliope, whose purse this will eventually be, who pointed me in the right direction. I ended up pinning it in while it was zipped closed and then opening the zipper to sew it in. When I was done, it lined up properly at the corners.

Now all this purse needs is some insides, which I started last night!
Posted by Clio at 12:02 PM No comments: Links to this post 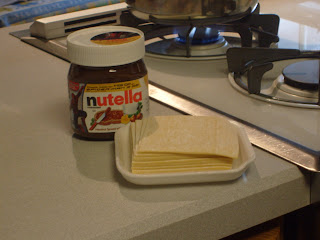 Well, I don't know what you call them, but yesterday was one of those moments when I glimpsed culinary nirvana. Orpheus and I made dessert for Sunday family dinner.

We took wonton wrappers and dolloped a teaspoonful of Nutella in the middle. We used clean paint brushes and a little water to seal them up into triangles. Orpheus was particularly good at brushing on the water, and with a little practice got the hang of making triangles.

After dinner I fried the triangles in an inch or so of oil and Orpheus sprinkled on powdered sugar. Voila! Oooey gooey melty nutty chocolate encased in a crispy wonton crust. MMMmmmmmm.... heaven.
Posted by Clio at 3:03 PM 3 comments: Links to this post

I am having serious zipper issues with the purse I am making Calliope.

I tried to install the zipper last night. In fact, I thought it was going rather well. That was until I tried zippering the clutch shut. The whole thing pulled to one side and made the clutch look trapezoid-ish. DOH! Very not good.

I blame it on crafting on a school night. I tend to be less patient and precise in the evening. Luckily, I had only basted the zipper in so it was easy to rip out. And I have learned a valuable lesson about lining up zippers. Now, I just have to figure out how to fix it. Wish me luck!
Posted by Clio at 3:13 PM No comments: Links to this post

Why My New Hobby Rocks 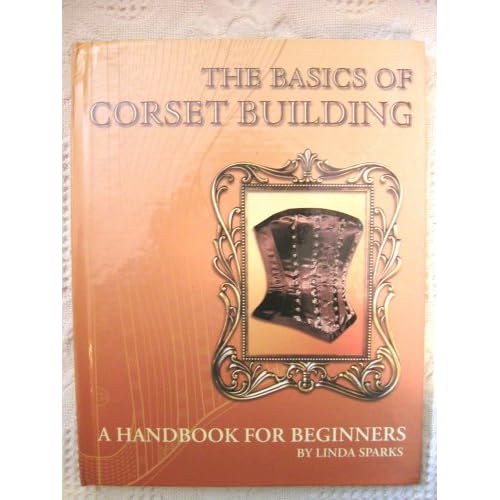 I will make myself corsets. Lots of them.

Posted by Clio at 2:13 PM No comments: Links to this post

Yesterday, Calliope summed up our parents perfectly: "quirky but benign".

My dad had left me a message asking for the name of my travel specialist. I later learned the reason: my parents have decided to go to Ghana in 6 weeks time. They have assured me that this is not a problem as there is a direct flight. What a relief!

Here is where Ghana is located, just in case you were wondering:

Why Ghana? Well, for the last two years, their parish has been home to a visiting priest from Ghana - Father Dominick - while he has been doing advanced studies at the seminary. In about a month, he will return to Ghana after a trip to Rome where Pope Benedict will be making him a Bishop. This is a huge source of pride for his community in Ghana, where his father is the Chief of the tribe. So, my parents and some other parishioners have been invited to accompany Fr. Dominick to Ghana for the festivities. So, they are planning on going.

After my initial freak-out about my parents going to Africa, here's what I learned about Ghana:
Since they will be looked after by the son of the tribal chief who is a newly minted bishop, I am less worried about that side of things - anything bad happening to them while they are there.

At this point, I would say that it is a 50/50 chance that they will actually go. I think that they may have their own freak-out after they visit the doctor and realize they need a Yellow Fever vaccination, along with Hep A & B, Meningitis, Rabies, Polio, and Typhoid. Oh, and they will have to take anti-malarial drugs while they are there. There is also some risk of dengue fever, leishmaniasis, river blindness, African sleeping sickness and schistosomiasis. No vaccines for those things. But there is a direct flight.
Posted by Clio at 3:38 PM 1 comment: Links to this post

I have discovered the Garment District.

Obviously, its been there all along, just a few blocks from my office. But I've been too intimidated to shop there because the stores cater to the industry, and I am such a novice.
But Polyhymnia dragged me to Mood Fabrics last week. They suggested that I try some of the shops on 38th Street between 7th and 8th Ave for some notions that I needed. So I spent my lunch hour on Friday wandering up and down that block.

All I can say is: WOW. There is every kind if niche sewing store imaginable - a zipper store, a store that sells only spandex, ribbon stores, button specialists, and an embroidery store that specializes in button holes. Yes! Button holes. You simply bring in a garment and they make a professionally finished made-to-order hole while you wait. Who knew?
I went to a trimming store that had miles of fur, sequin and lace trim and I bought some black sequined trim to transform an aging pair of going-out pants into tuxedo pants. I'm already dreaming of the clothing and accessories I will adorn with fur trim. Why should my clothing ever be plain again? 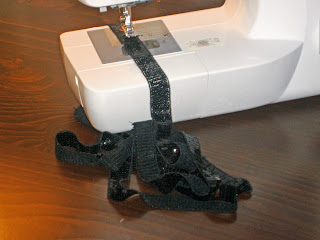 Sequined trim for my pants

Posted by Clio at 11:38 AM No comments: Links to this post

After I posted about the amazing meal Phineas made last week with a little bit of help from me, I asked him to pen a guest post on his broccoli.

Before you ask, yes, it is so good that it deserves a post of its own. Somehow he manages to get the garlic brown and nutty, but not burnt, and the broccoli perfectly cooked and flavorful and also browned in a few places. I cannot replicate the results no matter how hard I try. Even when he coached me thru it, I didn't get it quite right and the house didn't smell nearly as good.

Anyway, my request - that he write up how he achieves his recipe - has lead to major writers block coupled with a broccoli cooking binge. He made his amazing broccoli on Friday: 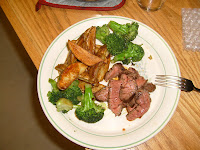 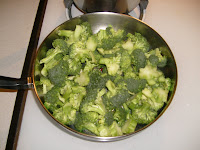 And last night, too. (Sorry no photo from last night. I just couldn't photograph any more crunchy greens.)

Happy Year of the Rat!

According to the Chinese calendar, the year 4705 - the Year of the Rat or Mouse (the word is the same in Chinese) - begins tomorrow.

People born in the Year of the Rat are noted for their charm and intellect. They work hard to achieve their goals, acquire possessions, and are likely to be perfectionists. Their ambitions are big, and they are usually very successful.

Year of the Rat is a time of hard work, activity, and renewal. This is a good year to begin a new job, get married, launch a product or make a fresh start.
Posted by Clio at 11:08 AM No comments: Links to this post

Last week I cut out all the fabric pieces for the clutch purse I'm making for Calliope. It really didn't look like it would - or could - transform into a purse. In fact, it looked more like a pile of scraps.
So, I wasn't feeling very optimistic when I began to assemble the purse yesterday. But by the end of the afternoon, I was about 1/3 done. And it's coming out better than I had hoped! Here is what I completed. 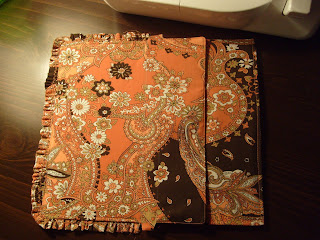 Think of it folded in half from top to bottom - ruffle on one side and flap pocket on the other - to get the idea of what it will ultimately look like from the outside.
Right now it is all just basted together, which is why there are many extraneous little threads, especially on the ruffle. 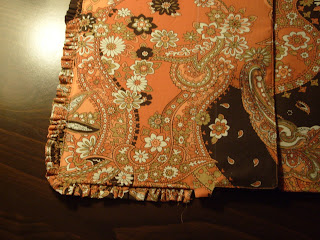 Look at my ruffle!
Next I will work on the inside and spine. And finally it will get a zipper and a wrist strap.
Posted by Clio at 12:18 PM No comments: Links to this post

Aunt Clio to the Rescue!

Orpheus' teacher, Miss Margaret, suggested that the class celebrate his 5th birthday today. With mom Calliope in Detroit for job training, there was a cupcake crisis looming.

Since I had been thinking of taking a day or two off anyway, this seemed like the perfect excuse. So, Orpheus and I spent the afternoon in the kitchen. Four hours, three licked spoons, two gobbled gumdrops and one egg on the floor later we were done with our creation. 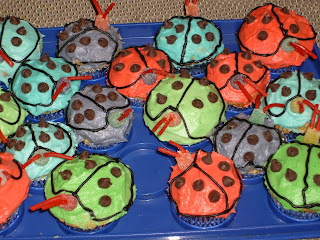 I allowed Orpheus to sample a ladybug. I hope he has a great class birthday. 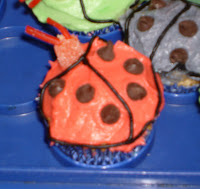 Posted by Clio at 10:17 AM No comments: Links to this post