The other muslin that I have in the works, as you know, is for my KS Cami, which I decided last week needed an FBA (Full Bust Alteration/Adjustment).

Rather than a dart, Kwik Sew adds room to get over the bust by having you gather up some of the fabric at each front side seam and ease it into the back side seam (ie: the front piece is longer than the back until you gather it up, distributing fullness over the bust). I would love to keep this pattern dart-less, and, in theory, I should be able to. If I just add some room to the front where you are supposed to gather, I should be able to ease he fullness into the seam the same way as the unaltered pattern, without adding a dart. 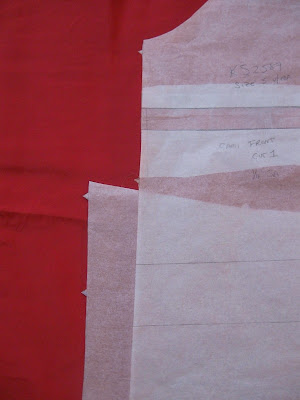 Gather the front up between the notches and then ease it in between the back notches.
I consulted the Kwik Sew website, where I learned 2 important facts from their on-line Fit Guide. (Seriously, KS really is tops for user friendliness.) First, the cup sizing of their patterns varies according to pattern size (XS and S are sized for a B cup, M is a C cup, L and XL are D cup). Second, they add 3/8 of an inch to the length for each cup size. SO, since I am going down to a size small, and therefore will have to up-size by 2 cup sizes, I should add 6/8" of length. 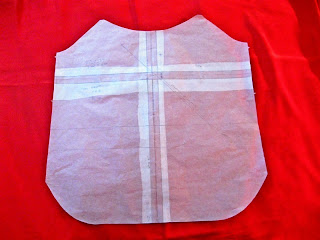 My altered pattern
The other  piece of the equation, is of course having enough room across the front. Looking at a similar RTW cami that I own, I noticed that the straps on the KS cami are set closer to the center than the RTW one. So, I've added one inch to the center of the KS pattern so that there is more room between the straps. Anyway, I hope this will add enough room in the right places for the cami to curve around the bust in an attractive way that doesn't lead to gaping arm pits.

I'm sewing up the second version of this muslin over the weekend. Fingers crossed.
Posted by Clio at 10:59 AM