It's Shark Week in the Craft Lounge

And we're pretty psyched about it.


You see, while Phin and I were away, "the kids" apparently watched a lot of Sharknado. We had hoped that the Tramples would keep Dragon and his tv watching in check. But apparently they "got sucked in, too."


So, to... um... provide some slightly better educational content for them, we're celebrating Shark Week here in the Craft Lounge... with costumes.... Everything is better with costumes.

And the Tramples are helping to provide some educational materials for Dragon and Milkshake.


But Dragon still seems to like the scary side of sharks best and insists that, while highly unlikely, it is theoretically possible for a school of sharks to get sucked up into a waterspout and rained down on unsuspecting land dwellers a la Sharknado, especially if it happens in LA. 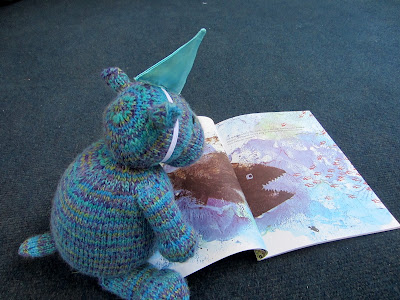 What can I say: we're shark-lovers. I've actually had two shark encounters while scuba diving - one with Phin and one without.* So, it was probably only a matter of time before there were costumes. These are very simple shark fins made from blue satin and a little bit of elastic.


Happy Shark week! And don't forget to enter the Pattern Pyramid Giveaway! Your chance of winning is MUCH better than your chance of being bitten by a shark.

*Now, I realize that if this was a horror movie, I'd be sealing my own fate by saying the following: There are only about 50 shark attacks globally each year and only 5 fatalities. Compared to mosquitoes (2 million deaths annually) and snakes (50,000), sharks pose as little risk to you as your pet dog. Oh, wait, many more people are killed by dogs than sharks each year. In fact, you are more likely to be killed by an elephant, a hippo or a cow than by a shark. So, I guess my little menagerie is a dangerous lot.
Posted by Clio at 10:28 AM

Labels: Hangin in the Craft Lounge, Purls of Wisdom, The Rock I Live Under, The Trample Herd

This blog spot pretty much confirms how much fun I think you're going to be to hang out with in person! Sharks = Love. I really want to hear about your shark experience! Also, have you ever been to the Rhinebeck Wool Festival? I'm trying really hard to get there this year since I'll be living closer and am looking for knitting friends to go with.

Ha! Sharks are awesome! I haven't been to Rhinebeck, but would totally be up for it! Let's see if we can coordinate some kind of meet up!

Them sharks is skeery! Although I am far more frightened of cottonmouths and copperheads, if truth be told, as I actually encounter them in real life. Sometimes they even crawl into the house to "play" with us, shudder shudder.


I like that you made shark costumes for your menagerie ... I used to keep a supply of paper angel wings to paste onto nearly every piece of sculpture and framed artwork at my church, each Christmas. (No one ever found ALL of them, to remove them before worship services, tee hee.)

Lin, that is awesome... the wings, not the snakes! Snakes are definitely scarier than sharks. Hmmm, maybe my herd needs wings next...

Bahahaha! Those little shark fins brightened up my whole week!

Brilliant! and I'll add a vote for wings! hmm- butterfly or songbird or honeybee?

Hmmm, I guess that would depend on which herd member I'm making them for.

Hilarious! But... the thought of 50,000 people A YEAR getting killed by snakes gives me the shivers! Gruesome!