My other project for Dr Kiang's shower was cupcakes. Sadly, they were devoured before I got a picture. 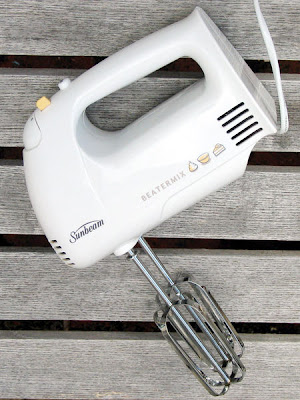 Here's a beater from Wikipedia, just in case you were wondering...
Magenta had wanted to keep things simple, and so we made a very good compromise on baking: Duncan Hines for the cake paired with my incredibly easy buttercream frosting recipe. I think of the frosting recipe as paired down almost to the point of cheating, but it got rave reviews and I was scolded more than once when I tried to move the bowl containing the last few licks of icing into the sink. So, in honor of Dr Kiang and the Tuesday Blue Plate, here is your recipe of the week:
"Bridal" Buttercream

1 lb of unsalted butter, softened to room temp
5 cups of confectioners sugar
3 tsp vanilla (any other flavor would work as well)

Whip the butter with a hand held beater or stand mixer for about 30 seconds on med to get it softened up. Add the sugar and turn beater on low so you don't create a dust storm. Gradually increase speed to get the sugar incorporated. It will begin to look like you are making pie crust (pea size pieces). You will be convinced that something is wrong, but just keep beating and all of a sudden it will become creamy and look like frosting. Beat in the vanilla. Makes enough to very generously ice a cake or 24 cupcakes.

Most recipes call for more sugar to butter than I use, but then instruct you to add milk or cream to thin the buttercream out to a spreadable consistency. Ridiculous! By adding less sugar, I've found that I end up with a more buttery and less cloyingly sweet icing that is spreadable without any milk added.

You can make this icing in advance and refrigerate it, but then you need to allow time for it to soften before using. Beating it for a minute or two also helps get it back to a spreadable consistency.

The key to successfully icing your cake or cupcakes is, when you are ready to frost, take a huge glob of frosting and plop it in the center of your cake. Then use your knife or spatula to slowly and systemically spread it around the top, over the edge and down, without picking the knife up from the cake. Just keep going at it until you are evenly iced. When you are done, slide the knife off the edge of the cake. If you pick the knife up, you will rip up crumbs from the cake and then they get mixed in with the frosting and it is a big old mess. A tasty mess! But a mess nonetheless.

Since this got such good reviews, I think I am going to have to test a chocolate version substituting cocoa for some of the sugar.
Posted by Clio at 11:47 AM

"Sadly, they were devoured before I got a picture" I think the only thing to do is to make another batch :)

...of course I can't guarantee that they will last long enough this time, either...

I am glad you posted the Bridal Frosting recipe since frosting is my arch enemy and yours came out so good!

I wanted to share what I did to the Peach coffee cake last night. Since we had no peaches, and had a peck of apples, and SJD had a bake sale today, I decided to substitute apples for peaches. I added 1 teaspoon of apple pie spice(cinnamon, nutmeg and clove mix I think) to the batter and a tablespoon of apple cider to ensure moistness. I also bought a fresh jar of Vietnamese Cinnamon which is spicier than other types. I got a great review from JD, who is a huge fan of the original recipe. I also really enjoyed it!

Mar - That is so funny since I have had plenty of cakes flop, but have always saved them with frosting! What a great idea for the coffee cake - especially making up the moistness with a little cider. I am at this very second eating what is probably the last farm stand peach I will see this year and got to talking with Phineas about moving on to apples in the next week. (

I, uh, licked the frosting off, um, 2 of the leftover cupcakes? Well... I ate the caps, but only after the frosting was thoroughly licked off...